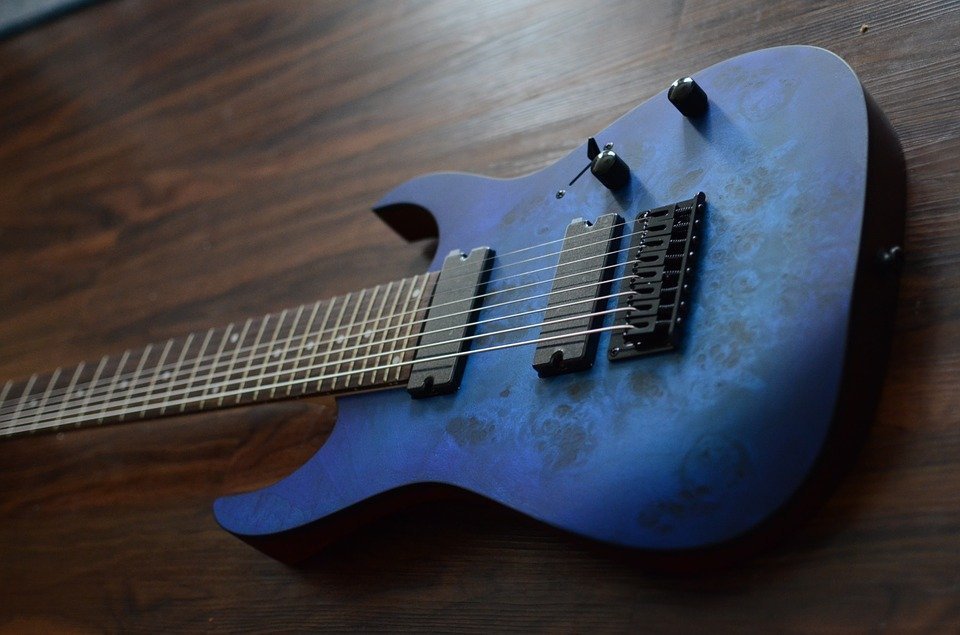 The use of the extended-range electric guitar has increased significantly in the last decade or so. A lot of modern music has become a lot heavier, more experimental, and has become quite popular. With the rise of djent and progressive metal bands like Periphery, more and more players have been interested in using extended range guitars. If you are new to 7 and 8 string guitars (and even 9 and more!), this guide will show you what to expect by answering some common questions and also help you figure out if extended range guitars are right for you.

What Is An Extended Range Guitar and How Do You Tune One?

An extended range guitar, or ERG for short, is merely a guitar that expands further on the standard 6-string design. A 7-string guitar is usually the first kind that someone gets unless he or she knows that they will need to use something even more advanced right of the bat.

Despite how it sounds, I want to point out that a 12-string guitar actually isn’t an extended ranged guitar and doesn’t function like one. A 12-string guitar is basically a 6-string guitar with smaller, adjacent strings that are tuned to octaves and unisons, which creates a more harmonic and ringing tone. It is also more commonly seen on acoustic guitars. In fact, 12-string electric guitars seem pretty rare!

On the other hand, 7-string electric guitars, and everything after that adds a single, additional string to the low-end. Here’s what the tunings of each type of guitar are, assuming you are in standard tuning:

You can see how they build on one another, and having extra strings and notes opens up more possibilities on the guitar. You don’t need a special kind of tuner either; just make sure that it is plugged in because the frequency of the low strings may be too deep for the microphone to hear, or it might just end up going haywire.

That being said, the next section will discuss why people use extended-range guitars, which could be reasons you should too. They have quite a bit to offer, which is why they’ve steadily become more popular.

Because of the additional low-strings being applied to the instrument, it’s evident that you can get a deep, thick, heavier sound than you would with a 6-string guitar. However, did you know that extended range guitars are also quite popular in the jazz community?

If you’ve been wondering or debating with yourself “why use a 7-string guitar?” or “is an 8-string guitar worth it?”, I think you should know that these instruments can add a lot of color to music, other than the deepest chugs.
Even with one additional string, you can expand your tonal range which gives you the option to:

So by having that extra range, the doors to even more rhythmic and melodic ideas are open, which is why they have been appealing to jazz guitarists, especially ones who improvise with their solos a lot. Other guitarists, like Tosin Abasi from Animal as Leaders, are known to use their extended-range guitars percussively by slapping with his thumb on the lowest strings, a common technique used on the bass.

All of this probably sounds amazing, and it is, but there are some drawbacks to using extended range guitars that you should also learn about before you purchase one.

The Disadvantages Of Extended Range Guitars

One of the main concerns about using these types of guitars is that they are perceived as more difficult by guitar players. A couple of the most common questions regarding these guitars that I’ve heard have been: “are 7-string guitars hard to play?” and “are 8-string guitars too big?”.

The wider fretboard on these will take some getting used to, that’s a given, but I believe that anyone can learn and get comfortable with using them, provided that your fretting hand isn’t severely impaired.

Similar questions arise with people who are looking to get a 5 or 6 string basses as well. 5-string basses aren’t hard to get used to, but 6-stringers can take a little bit more time because the neck is even wider.

I think a lot of the apprehension of buying an extended range guitar is actually a mental barrier that can definitely be overcome with time and some practice.

Regarding notes, it is really no more difficult than a regular guitar. You just have more strings, and you need to be mindful of what the starting note of that string is. A 7-string is a bit easier to jump right into because you’ve already had a B-string this entire time, and if you’ve memorized the notes on the fretboard, you can easily apply what you know to this one and both B-string will be the same, just like how both E-strings are.

However, 8 and 9-string guitars might have a little bit more of a learning curve for them. With the addition of F# and C# strings respectively, you will have something new to learn, but it’s not necessarily more difficult – they’re just new strings and different starting notes to work with.

Speaking of 8 and 9-string guitars, while 7-stringers have an extended scale, the 8 and 9-stringed ones are even more pronounced. You’ll have to be careful with intonation and string tension with these. Some of them also have a multi-scale fingerboard to help accommodate this. The weight on extended string guitars will also be a little bit heavier because of these factors.

Nowadays, guitar string manufacturers also make packs that are suitable for extended-range guitars, like these ones on Amazon, so that also helps with some of these issues. Just take your guitar to a professional who can set it up, and you should be just fine.

What Is The Best 7-String Guitar For Beginners?

Even though the difficulty is one of the primary concerns that guitarists have with extended range guitars, you should find solace knowing that guitar companies typically make them extremely comfortable to play, despite being wider.

I also recommend starting off with a 7-string guitar initially, because it will be a more natural transition for people who are just interested in experimenting with extended range guitars for the first time.

One of the guitar manufacturers that is known for making fast, playable extended range guitars is Ibanez, and their RG7421 model is a great electric guitar for under 500 dollars.

If you’ve been looking for a 7-string guitar for sale, and you are familiar with some of the mid-ranged Ibanez 6-string RG models, this one should feel quite similar. Here are some of its specs that contribute to its comfortability:

I also really like the hardtail fixed bridge on this guitar because I think restringing a locking tremolo would be very inconvenient on pretty much any extended range guitar out there.

The stock pickups are quite good in this guitar, but you can always swap them out for something like these if you want to beef up your sound even more. It’s not necessary though, because these are a decent pair of passive guitar pickups.

There are cheaper 7-string guitars out there, but this is probably the best one for the money. The quality of the RG7421 is leagues above the Ibanez 7-string GIO line, so investing in one like this will have long-lasting value and won’t need to be replaced as quickly as a cheap guitar.

In all likelihood, it can probably last you forever – mid-tier guitars, like the RG7421, have a lot of potentials to be excellent instruments. They work just fine in the live and studio settings, so they’re versatile and worth the two to three hundred extra dollars give or take.

What 8-string Guitar Is Good? How About 9?

Maybe you’re not a beginner to extended-range guitars, and you already have invested time in the 7-string. Or, perhaps, you’re in a band that calls for the use of an 8-string guitar.

While my experience with 8-stringers is limited, the best 8-string guitar that I’ve ever played was a Schecter C-8 Deluxe. One of my friends used to own one of these (I’m really unsure as to why he sold it!), and after it was professionally set up by a guitar tech, it felt extremely nice.

It’s actually quite comparable to the 7-string Ibanez guitar that we just went over too, not only in price but features as well. The Schecter C-8 Deluxe has:

The stock Schecter pickups also sound good, but as always, you can replace them if you feel the need to. Overall, it really is quite similar to the Ibanez RG7421 aside from branding and some differences in feel. It is well-made, feels comfortable, and you should expect it to last you a very long time.

Unfortunately, I’ve yet to play a 9-string guitar, to be completely honest with you. These guitars seem pretty scarce, and not very easy to come by, probably because the demand for them isn’t as high as a 7 or 8 string guitar. Fear not, they are out there, but they tend to cost considerably more than their counterparts.

For example, check out this Schecter 1781, also known as the Hellraiser C-9, 9-String guitar which has:

I’ve never personally played this guitar, but I have played many in my lifetime, and it has a lot of similarities to ones I’ve already tried, like some of the 6-string Schecter Hellraisers. I can tell that this is a most likely a very good 9-string, and you should take it for a spin if you get the chance to.

In the meantime, you can learn a lot more about it and how it sounds from this video:

Hopefully, this article has given you adequate information that can prepare you to venture out into the world of extended range guitars. A lot of people have an interesting mixture of curiosity and apprehension when it comes to these instruments. I also hope that by answering some of the questions that you may have, that some of that hesitation is gone.

In this guide to extended range guitars we went over:

I also gave some suggestions for some good guitars that are worth a shot, if you’ve been interested in picking up your 7, 8, or 9-string electric guitar for the very first time.

However, as I mentioned before, if you happen to be just transitioning to extended range guitars from a 6-string one, I highly recommend getting a 7-string first because you’ll be able to adjust to it easier, in my opinion.

It might seem blunt, but I think the only valid reason to jump right into an 8-string guitar or higher is if you have music that truly demands one of those instruments. Sure, they look pretty cool, but they’re kind of niche right now, even with the rising popularity of djent. But, if that’s your go-to music right now, I say go for it, because that’s where you’ll get the most use out of one in my opinion.

Regardless of my opinion and how many strings you decide to go with, from metal, jazz, or whatever genres you have a background in, an extended range guitar can be a useful tool that facilitates expansion and creativity. Importantly, I think you’ll have a lot of fun with them, and these instruments can be a breath of fresh air for your guitar playing.