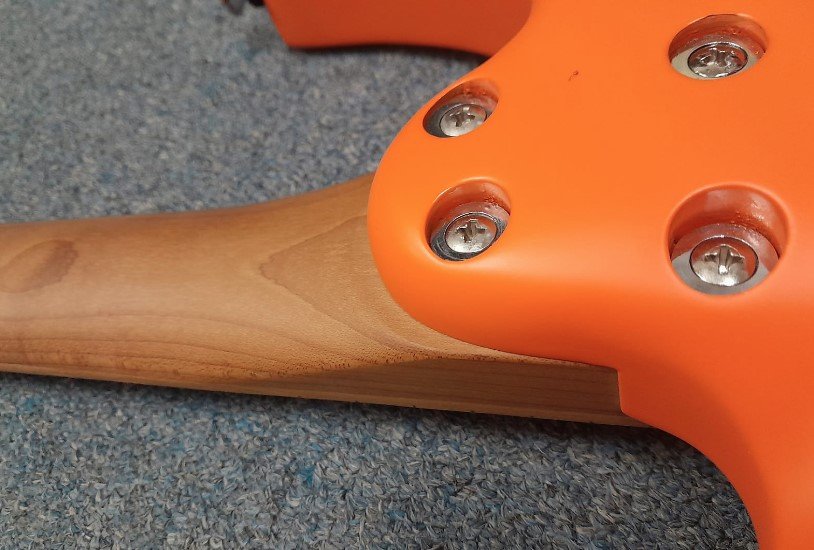 Guitars with bolt-on necks are easily the most widely available, but have you ever thought about why that is the case?

There are actually some pretty practical reasons why you’ll find guitars with this type of construction more than others and some tangible benefits of why people enjoy them. Here, you will learn about the two main reasons why bolt-on-neck guitars are an excellent choice when buying a new instrument or looking to build your own.

1. They Are More Affordable

One of the main reasons why guitars with bolt-on necks are so popular amongst manufacturers and players alike is that they are more cost-effective than set necks and neck-through-body construction.

For guitar companies, it takes much less time and effort to create a guitar neck and body separately and attach them with bolts or screws than to make a guitar using other methods, like gluing them together or making a guitar from one large piece of wood.

With the bolt-on construction, these guitar manufacturers can mass-produce guitars and even pass on the savings to the customers. If you haven’t noticed already, just about all entry-level guitars available use bolt-on necks.

This strategy helps them become more affordable for beginners; if they used neck-through construction, they’d be considerably more expensive.

However, make no mistake, bolt-on does not necessarily mean cheap in price and quality! There are plenty of high-end guitars that use bolt-on necks by major brands like Fender, Charvel, and Ibanez.

Many expensive instruments use bolt-on necks because there are other pros to having one that you can learn more about as you continue to read on.

2. The Necks Are Easier To Replace

In contrast to neck-through-body guitars, which can sometimes be impossible to fix or, at the very least, very costly due to the nature of their construction, guitars with bolt-on necks come with significantly less risk.

Although it’s tragic to break any kind of guitar neck, if you have a bolt-on, it’s much more straightforward to remove the old broken neck and find a direct replacement for it.

If you’ve ever noticed, some of the most active guitarists on stage, such as Herman Li and Yngwie Malmsteen, use bolt-on guitars.

Sure, they definitely have backups in case something goes wrong while they’re doing guitar flips by spinning their straps but having the ability to replace the neck is a huge benefit.

Even if you don’t have a broken guitar neck, bolt-on guitars can allow you to change or upgrade your existing one too potentially.

As long as it matches the dimensions of your original neck, so it fits, you can swap it out for one with a different type of fretboard wood, or speaking of Malmsteen, get a neck with a scalloped fretboard.

Doing this isn’t possible with set necks and neck-through-body, so this is a significant upside to bolt-on guitars for many people.

3. The Necks Can Be Adjusted

In addition to being able to get a new neck entirely, bolt-ons allow you to make some adjustments to it if you need to.

One of the main adjustments you can make to a bolt-on neck guitar and not with a set or neck-through-body one is changing the neck angle. The angle of your neck can influence the action and, therefore, the playability of your guitar.

For example, if your neck’s angle is too shallow, you may have trouble adjusting the bridge or saddles and achieving your ideal action, which for most people, is low.

To rectify this, people can take the neck off and add a shim that you can add between the neck and body that can correct the angle.

Usually, people will use a maple veneer because it matches the material of most necks, and if you measure it properly, it won’t leave any unused space between the neck and body.

Luckily, you can easily buy a shim rather than make one yourself. Many of them come pre-drilled, but you can also buy blank ones if you have an unconventional hole pattern in the neck joint.

This video is from StewMac, who makes convenient shims and will show you how they can help you if you have a bolt-on guitar with a neck that needs a better angle.

Are There Any Cons To Using Bolt-On Necks?

With all of these practical benefits to bolt-on necks, there has to be some catch, right?

Aside from the possibility of the neck shifting, which is fixable, there aren’t any real significant downsides to having bolt-on-neck guitars, and most criticisms are subjective and highly debatable.

This is especially true when comparing sound quality between the main kinds of construction styles.

For instance, some believe that bolt-on guitars don’t have as good of sustain as their neck-through counterparts. But it’s not scientifically confirmed that neck-through guitars have any tonal benefits whatsoever.

On the other hand, some people believe that neck-through guitars have more snappiness to their sound.

There may be some truth to this, but ultimately, it might depend more on other factors.

Take Fender Stratocasters as an example. These guitars have historically used bolt-on construction and are known for their bright and twangy quality; however, this is most likely do their frequent use of single-coil pickups rather than the neck joint.

Just like I mentioned in my article discussing the pros and cons of neck-through guitars, I think any sonic differences related to neck construction are negligible and hard to notice, if they even exist.

When it comes to playability, people will argue in favor of bolt-on, set-neck, vs. neck-thru regarding how comfortable they feel, especially when trying to access the higher frets up on the neck.

In my experience, neck-through did seem to edge out bolt-ons in the playability department, but I’ve played guitars of all types that were incredibly comfortable, had great sustain, and were very responsive.

Therefore, I think it’s inaccurate to say definitively that either kind of guitar has an advantage over another regarding feeling and sound quality. It’s all subjective!

Related to what I mentioned earlier in this article, another misconception that bolt-on necks have is that they are of lesser quality.

There are definitely poorly-made guitars that use them, especially many beginner guitars, but this is more of an issue with mass production and inadequate quality control by the manufacturer rather than the design itself.

I may sound biased toward bolt-on guitars, but the truth is, it’s tough to go wrong with getting one, especially if it’s one of decent quality.

Admittedly, I love the look of neck-through guitars, but ultimately, I appreciate the practicality of bolt-on guitars and the benefits they offer people, which can be proven.

If you plan on getting a new guitar soon and you’ve been on the fence, hopefully, these pros of bolt-on-neck guitars are ones that you’ll strongly consider. Still, shop around and try some different guitars out if you get the chance because there are amazing instruments, no matter which type of construction.