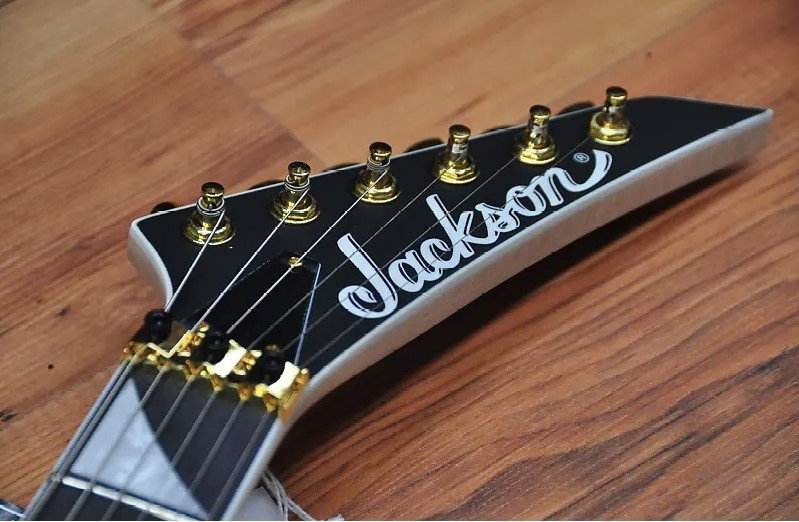 Jackson is one of the most iconic brands and the maker of some of the best guitars for metal. In this article, I will show you that you don’t need to spend a fortune to have a high-performance guitar by recommending some of the top Jackson guitars you can find of great value if you’re on a budget.

For under $500, these Jacksons are perfect for metal fans who are new to the guitar as well as intermediates who want a solid instrument that can help take them to the next level!

The Jackson JS22 Dinky is a very affordable guitar that doesn’t sacrifice quality or performance, and it’s an excellent guitar for beginners with a very tight budget.

That being said, the Dinky, along with its big brother, the Soloist, design is part of a group of guitars known as superstrats, which are some of the best instruments for shredding. So, this Dinky is a pretty solid first superstrat if you’re new to playing.

The JS22 Dinky has a great look and playability with its poplar body, fast-playing maple neck, and 12″-16″ compound radius amaranth fingerboard with 24 jumbo frets. It also sports two Jackson humbucking pickups to help you get the tone you want, but it’s best for metal.

At the end of the day, this is still a budget Jackson guitar for beginners, so if you’ve been playing for a while and want a Jackson Dinky that’s a slight upgrade over this one, I have another one in this guide you should check out.

The Jackson JS22 Monarkh is another excellent guitar for metal that won’t break the bank. Although it’s in the same JS22 line as the previous guitar and has some of the same features as the Dinky, there are some differences you should know about.

Let’s go over the first one – this is Jackson’s take on the famous Les Paul design, and instead of the body being made from poplar wood, the JS22 Monarkh uses a mahogany body. This guitar does use the same Jackson humbuckers, a maple neck, and an amaranth compound radius fretboard as the JS22 Dinky; however, this Monarkh actually only has 22-frets and a shorter scale length than your typical guitar. Most guitars have a 25.5” scale length, whereas this one is 24.75.”

Also, instead of the two-point tremolo system, this one uses a fixed Tune-o-Matic bridge, so that’s that something to keep in mind.

If you’re into Les Paul guitars and like Jackson’s modern spin on a classic model, the Monarkh is definitely worth looking into, and the JS22’s price, which typically runs for under $300, makes it easy to get your hands on one.

As I promised, if you’re looking for a value Jackson guitar that’s an upgrade from the JS22 Dinky, the  JS32 version is quite literally a step up.

Although there is a regular JS32 version, I recommend the JS32Q because I think the quilted maple top on the poplar body is gorgeous, and it comes in many fantastic colors to choose from.

It also introduces a licensed Floyd Rose, which is more reliable than the tremolo system on the JS22. However, you can find cheaper versions of JS32 series guitars that have a hardtail bridge or a Tune-O-Matic instead of a Floyd Rose if you prefer fixed bridges.

Other than the Floyd and having a better build quality, the other specs on the JS32 are basically the same as the 24-fret JS22 Dinky; keep in mind, while they’re decent, if you wanted to, you could always swap out the stock Jackson pickups too. I’ve written a guide on some of the best pickups for metal if you’re interested in this affordable Jackson guitar but are keen on making some modifications to it.

The JS32 is Jackson’s most extensive line of mid-priced instruments, and all of their shapes in this particular tier carry the exact specifications on them as the JS32 Dinky that you can review above.

Because of this, I’m not going to talk much more about the little features of the Rhoads and the upcoming models. So, instead, I will briefly discuss some of the histories behind these specific Jackson guitars, which might help create additional interest in them.

In case you aren’t aware, the Jackson Rhoads is one of the most iconic electric guitar designs of all time, and it was created for the late and great Randy Rhoads, who played with Ozzy Osbourne. He recorded the guitars on Ozzy’s first two solo albums and toured with him up until his untimely death in 1982.

Initially starting with the famous white and gold pinstripe model you see in many pictures with Randy, 40 years later, the Jackson Rhoads come in different appearances, and people with varying budgets can purchase one. The JS32 Rhoads happens to be one of the most affordable ones. At around $400, it’s an excellent guitar for both beginners and intermediates!

I feel like many people forget about the King V model, Jackson’s other V-guitar design with symmetrical fins, which contrasts with the uneven ones on the Rhoads. When it comes to V-shaped guitars, I’m more of a Rhoads guy myself, but the King V guitar has been used by some of my favorite players too, and I do have an appreciation for the guitar.

A ton of people mistakenly attribute the Jackson King V to Kerry King from Slayer, who was mainly known for using B.C. Rich and Dean guitars. In actuality, this specific guitar model was designed for Robin Crosby, who played for Ratt back in the day and had the nickname “King” because of his large stature.

Despite this, the most famous individual known for using Jackson King V guitars was Dave Mustaine from Megadeth in the 80s and 90s. In fact, Dave got his signature King V’s in the mid-90s, known as the KV1, which are hard to come by on the market and very expensive.

Still, if you love the King V’s look, nothing stops you from playing one! The JS32 King V could be yours for under $500.

Speaking of Megadeth, the Jackson Kelly is a super cool design that has close ties to Marty Friedman, who played in the band from 1990-1999 and performed some of metal’s most recognizable solos with a Kelly.

Although the Jackson Kelly is most commonly associated with Marty Friedman, the Kelly was a design created for Bradford Kelly, who played in a band called Heaven.

So, in a way, the Kelly does have some similarities to the King V model in regards to a more famous guitarist being connected to the design than the individual it was made for originally.

The Kelly is based on Gibson’s Explorer model, but I think it’s way cooler and exotic looking. If the Kelly suits your tastes and you want a great guitar that stands out in how it looks and sounds, I highly recommend the JS32 if you’re going to find a Jackson Kelly at an affordable price.

If you thought the Jackson Kelly was pretty wild looking, the Warrior model takes it up a notch! This crazy design doesn’t really have a history of famous artists using it, like the other Jacksons in this guide, but it still has a fascinating past.

This X-shaped guitar is derived from the Star model, an old Jackson original design that was like an amalgamation of the Gibson Explorer and the Flying V. Subsequently, many brands would add their take on the Star model like ESP and Ibanez.

Aside from some signature models, like Gus G’s, I’m fairly sure that Jackson doesn’t produce their original Star guitars anymore, and since the 90s, the Jackson Warrior has been their model that fills its niche with guitars with similar shapes.

Personally, I think the Warrior stands out amongst all of them, and if you agree and dig the look of this guitar, be sure to give them a look. These guitars have a lot of bite to them in terms of looks and sound, but don’t hesitate to give them a try – they’re more comfortable to sit down and play with compared to any of the V shapes.

Whether you want a more traditional-looking guitar like the Dinky or something that sends a strong message like the Warrior, Jackson has been making sleek-looking instruments that have been relevant for at least 40 years.

At under $500, hopefully, some of these budget Jackson guitars resonate not only with you in looks but in price as well. Here’s a quick summary of the features of these guitars so you can compare them:

As you can see, the main thing that sets these guitars apart at this price point is their shape and the type of bridge they use, the latter usually being what causes some of these guitars to be a bit more expensive than others.

So, essentially, for these guitars that hover around $300-400 on average,  just pick one that looks the best to you! You can always make upgrades if you ever need to.

Many artists have made close relationships with these guitars and have had career-defining moments with them – perhaps you could be next? You never know until you own a Jackson for yourself.