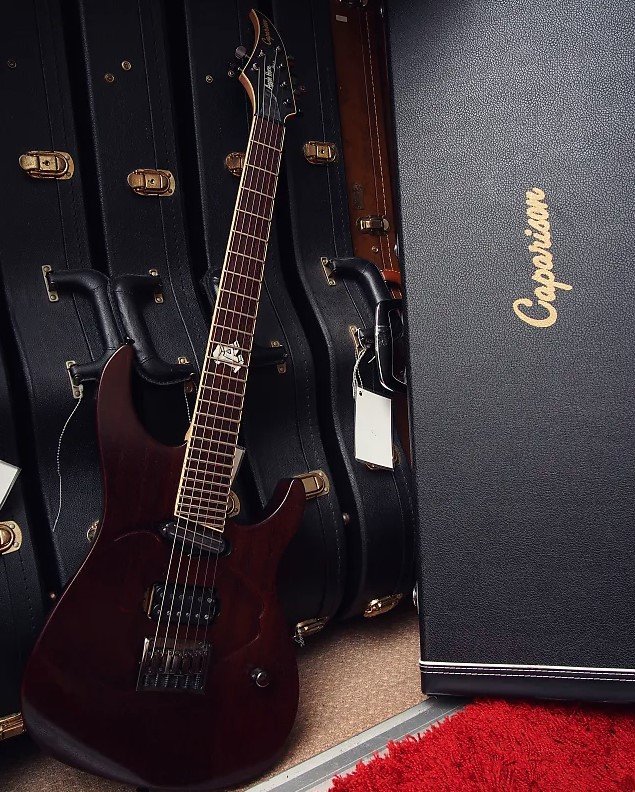 So, without further ado, here are the top Japanese guitar brands!

Ibanez is one of the most iconic Japanese guitar brands out there. They’ve been making instruments since 1908, initially as Hoshino Gakki, which is still the parent company today. And their guitars are used by some of the most famous musicians in the world. Some names include Steve Vai, Joe Satriani, Paul Gilbert, Tosin Abasi, Tim Henson, and countless others.

Ibanez is known for both their innovation and elaborating on and even improving existing designs (i.e., floating bridges), and they were one of the first companies to mass-produce seven and eight-string guitars, which are a staple in a lot of today’s music, especially modern metal. Throughout the years, though, they’ve been considered one of the premier superstrats because of their thin and fast-playing necks.

They’re also known for their wide range of products, from budget-friendly entry-level instruments to high-end signature models. So no matter what your budget is, there’s an Ibanez guitar that’s perfect for you.

Yamaha is another Japanese company with a long history of making instruments. They started as an organ manufacturer in 1887 and a piano maker in 1900, but they didn’t begin making guitars until 1960. Nowadays, they pretty much make everything!

Since then, Yamaha has become one of the most respected instrument brands in the world but is still pretty underrated compared to many of the others out there, at least for guitars. Yamaha guitars are used by everyone from beginner players to world-renowned artists like Chris Poland, Frank Gambale, and bassist Billy Sheehan.

A lot of guitarists are probably familiar with Yamaha’s Pacifica electric guitar model because it’s a very popular entry-level Strat-copy, but they also make excellent steel-string and classical guitars, too. In fact, their acoustic guitars might be considered even more popular than their electric guitars these days. Still, the point is that basically everyone has encountered a Yamaha guitar sometime in their lives, and that’s because they’re the largest manufacturer of musical instruments and other electronics.

ESP, an acronym for Electronic Sound Products, is a Japanese guitar company that was founded in 1975. They’re best known for their heavy metal and hard rock guitars, which are used by some of the biggest names, including Kirk Hammett, James Hetfield, and George Lynch.

ESP also makes a wide range of other guitars, including acoustic guitars, basses, and even ukuleles, under the Takamine brand. They’re known for their high quality and attention to detail, and musicians of all genres use their instruments, especially those in metal bands.

Many people get their first taste of ESP guitars through their LTD line of guitars, which are affordable and sometimes consist of budget versions of signature guitars, such as those of the artists mentioned above. In the Japanese market only, ESP also has another subsidiary, Edwards guitars, which makes very high-quality instruments at more reasonable prices compared to the true ESPs, especially the Japanese-exclusive models. Unfortunately, these guitars are very hard to find in the United States and other Western countries and usually must be imported, which comes with more fees.

Fender’s Japan division is one of the most well-known Japanese guitar brands. Sure, Fender is an American company originally, but its Japanese segment is a separate entity with its own factories and designs and has its own history and reputation entirely.

The biggest difference between Fender Japan and Fender USA is that the Japan division made high-quality instruments at a lower cost back in the 80s and 90s. This is because the cost of labor and materials was much cheaper in Japan at the time, so they could afford to use better materials and put more time into each instrument without having to worry about import costs. So while there are a ton of purists still out there who try to belittle Japanese Stratocasters, they’re objectively top-tier guitars that are still in demand today by players and collectors.

Fender Japan also has a wide range of unique models that aren’t initially available from the US division. For example, they offer Telecasters with humbucker pickups in the bridge position, which are a rare sight to see. Fender Japan also first produced the HM Strat, which was Fender’s take on the popular superstrat design in the 80s, and has since been reissued a couple of years ago. As of 2015, the Fender Japan brand has retired and has since been called Fender Music Corporation (Japan), so its legacy still lives on through these reissues and the high-quality instruments floating around out there.

Caparison is a modern Japanese guitar company that was founded in 1997. They’re known for their unique, classy, and innovative designs, which combine elements of newer and older guitars. As a much younger brand than the others, it’s outstanding how quickly the Caparison brand caught on by the mid-2000s and has had a roster of very well-known artists under its belt.

Some of their most popular models include the Dellinger, the Horus, the Applehorn, and the TAT, and they have been notably utilized by guitarists like Michael Romeo, Andy LaRoque, Olof Morck, and Adam D., Joel Stroetzel, and Mattias Eklundh.

Caparison make beautiful instruments, but they usually come with a hefty price tag compared to these other brands, but it definitely reflects their fine craftsmanship. One part of me wishes that they had more affordable guitars, but the other understands and respects their reputation as a hand-made Japanese guitar brand with extremely high standards.

There are countless great Japanese guitar brands out there, each with its own unique history and style, and in this article, we’ve looked at some of the best and most well-known ones, including Ibanez, Yamaha, ESP, Fender Japan, and Caparison, and hopefully, you now understand why they’ve earned their place as the top guitar brands from Japan. While many of these brands are often competing with each other, they have their own strengths and can bring something different to the table. Because of this, there’s definitely a Japanese guitar out there for everyone. Thanks for reading, and hope this has given you some ideas on what your next guitar could be!