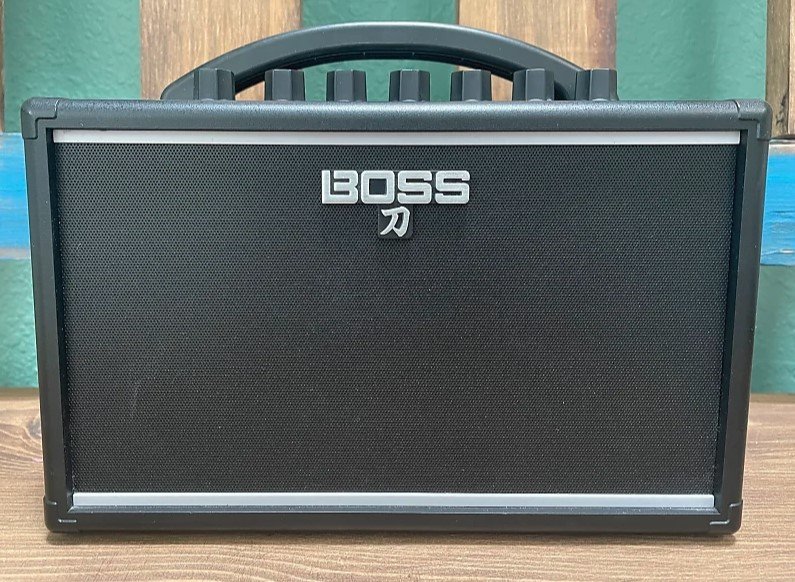 If you’re looking for a tiny battery-powered amp you can take with you on the go and have some fun with no matter where you’re at, then these miniature amps for guitar will be right up your alley. In this article, I’ll share with you some mini amplifiers at a few different wattages so that you can find the best mini amp for your guitar-playing needs.

Ah yes, the classic Marshall brand known for creating some of the biggest guitar tones over the decades also comes in a bite-sized form.

The MS2 is a miniaturized half-stack that’s powered by a 9V battery in the back and produces a whopping 1-watt of power!

That might not sound like much, and it really isn’t when compared to the other amps in this guide, but I think this mini amp for under $50 is best suited for people who are trying to practice without having to plug in an amp somewhere.

This is because you can compensate for the low volume by taking advantage of its headphone jack, as well as because it’s extremely lightweight – it’s not even half a pound! Therefore, I think this is one of the best mini amps for traveling, but if you need something a little louder, read on ahead!

Getting into the amps that have a little more power and some more features, we’re looking at the Blackstar FLY3 Mini, which is a super sleek-looking solid-state amp with a 3-inch speaker that is capable of a lot of neat stuff for under $100.

Right off the bat, you’ve probably noticed that this is a 3-watt mini amp, which is a step up from the others we talked about so far. It’s also the first one to introduce effects; in addition to the basic controls, this small Blackstar amp also offers you a delay knob, which I think is a really nice touch.

You also get two channels – a clean and overdrive, and I also think it’s really cool that this little amp has the ability to let you connect an extension speaker if you choose to, which are sold separately.

Of course, you can also use headphones too if you want. However, instead of using a 9V battery, this uses 5 AA batteries, but you still have the option to use a DC adapter if you are able to play while plugged in.

Orange makes some of the coolest looking amplifiers on the market in my opinion; they’re so simple looking, but the color is so distinct it helps it stand out. Not to mention they also sound great, and that includes this 3-watt mini amp with a 4-inch speaker.

While this doesn’t have separate channels you can change to with the press of a button, you can acquire sweet cleans, heavy distortion, and anything in between by adjusting the gain knob, and you can adjust your EQ by dialing the shape knob.

Also, this amp doesn’t have any digital effects, but I really like that it includes a built-in guitar tuner; that’s super convenient!

Only weighing in at about 2 lbs., this Orange amp is heavier than some of the others, but it’s still very portable and has a lot of the standard features you’d expect from a mini amp for under $100, like a headphone jack, an auxiliary port so you can play along to your favorite songs, and the option to connect an external speaker.

In the amp world, Donner isn’t as huge as some of the other brands talked about in this list, but they are well-regarded as producing a variety of good equipment at very affordable prices, and at under $100, this one actually surprised me at the what it can do.

Not only does this provide more output than all the other mini amps so far, but it comes with six different amp models, a handful of different effects like chorus, tremolo, delay, and reverb, and a built-in drum machine/metronome!

While this might not seem huge to a lot of players, I think having something to help give you a tempo while you’re playing with headphones making it possibly the best mini amp for practicing.

What’s also awesome is that it has a USB-C out. This feature allows you to connect it to your mobile device as well as your computer so you can power it up (it can use AA batteries and a DC adapter, too), update the firmware, and even record with this mini amp. It also offers BlueTooth capabilities, so you can connect your smartphone or wireless headphones with it, which can come in handy. Don’t sleep on this micro amp because it has a lot of benefits it can offer you!

Lastly, one of the most “robust” micro amps you can pick up is the Boss Katana Mini, which consists just of one 4” speaker and has an output of 7 watts, that uses 6 AA batteries or an AC adapter, which is somewhat unusual compared to what we’ve gone over so far. Regardless of that, this solid-state amplifier, which weighs slightly more than 2 pounds, is fantastic.

This mini amp typically runs for slightly more than $100, which is understandable because it offers more power and more expanded controls for its features, such as providing three different channels, individual knobs for the EQ, and the Delay effect.

As expected, you also have the headphone and auxiliary ports at your convenience; however, it doesn’t have an extension speaker jack.

Overall, with its diverse features and tone-shaping abilities and its larger output without adding much weight, this is an excellent, well-made amp for people who just want something they can set down on their desk and play or, as usual, take with them while they’re out and about.

The price of a good mini amp should always reflect its size, and in this guide I’ve shown you some of the best mini amplifiers that will run you around $50 to $100, give or take. Here’s a quick recap of them:

These little amplifiers are great at what they do but keep in mind that they are still limited in a number of ways; so if you need something with a bit more power or features without breaking the bank, be check out my article to some of the best practice amps, which covers a lot of the same brands that were shown here.

However, if you already know what to expect from a mini guitar amp, I hope that this article has helped you pick one that will offer you a ton of enjoyment and convenience anywhere you want to play the guitar.