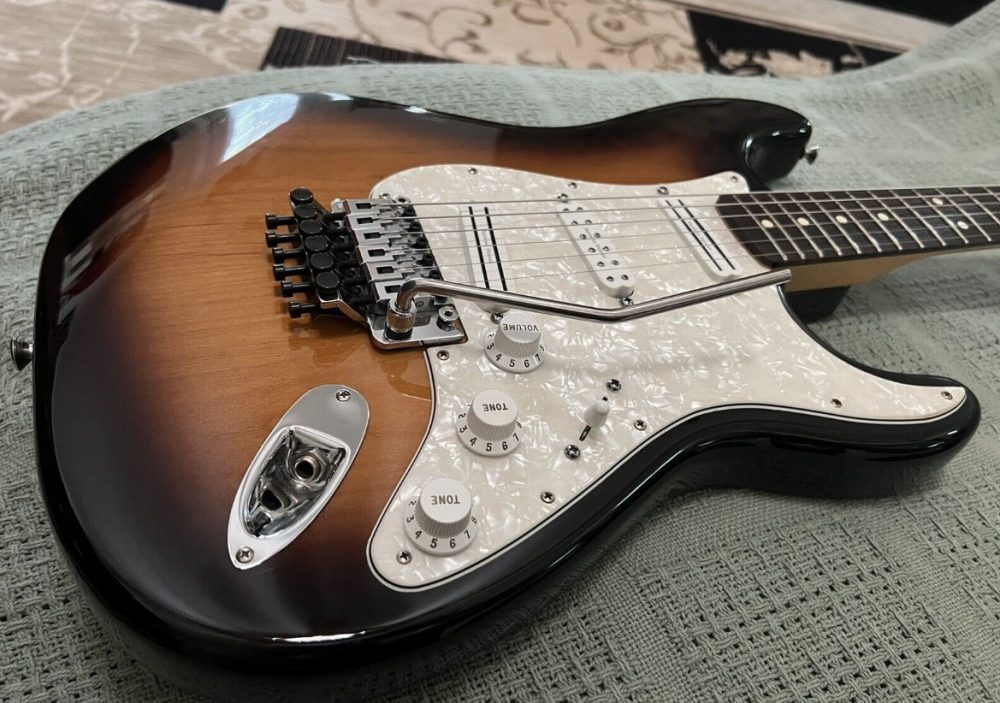 Looking to thicken up your Strat’s tone while eliminating the noisiness of your stock single-coil pickups? You’re in luck because single-coil-sized humbuckers will do the trick! These allow you to take advantage of the benefits of regular humbuckers, such as higher output, a beefier sound, and noise cancellation, all while allowing them to fit right into the single-coil pickup cavity in your guitar and pickguard.

Although there isn’t a whole lot of diversity when it comes to brands and these types of pickups, in this guide, I will share with you some of the top single coil-sized humbucker pickups that will make fine upgrades to your Fender Stratocaster or Strat-style guitar.

Here, I will be focusing mainly on ones that will go into your bridge position since this is what the majority of people swap out first; however, I will also suggest ones that can go in the neck and middle to complement your bridge pickup.

In my opinion, the Seymour Duncan JB is one of the most versatile humbuckers out there, but it’s easily in the hall of fame for the best rock and metal pickups of all time.

Now, you get to enjoy Seymour Duncan’s flagship humbucking pickup in single-coil-sized form, making it a great addition to any Strat.

Sure, I might have a bit of a bias towards the JB since I’ve used it in many guitars, but with the decades of accolades and endorsements by other musicians, I can confidently say that millions of other guitarists out there love this pickup too.

I can almost guarantee that you probably will too!

With that said, let’s talk a bit about some of the features of the JB Jr.

Like its father, the regular JB, the Jr. is a high-output passive pickup made with an Alnico V magnet that is more focused on the mid-range and treble on the EQ curve, but it still has plenty of bass frequencies and harmonic content, too, making an excellent bridge pickup for punchy rhythms and scorching leads.

The JB Jr. is great in the neck and middle positions too, but if you plan to upgrade those too and get some more diversity, there are other pickups I can highly recommend that you might also like.

For example, the ‘59 is a popular partner to the JB, and to continue that pairing tradition, there is the Seymour Duncan Little ‘59 neck to go with your JB Jr., which you’ll have installed in the bridge. Now, in the middle, you can throw in a Hot Rail, and you’ll have yourself an excellent setup.

The Hot Rails are also incredible in the bridge and neck too, and the Dave Murray loaded pickguard uses this with a JB Jr. in the middle position instead. It’s fantastic if you’re a Maiden fan, and that’s the type of chunky Strat sound you want to have too.

Check out this video comparing these two great candidates for your bridge pickup:

Another amazing humbucker that has passed the test of time is the DiMarzio Super Distortion, and like Seymour Duncan, they made a great decision by adapting one of their most popular pickups into a single-coil-sized one.

Like the Seymour Duncan JB, the Super Distortion is also a multifaceted pickup that’s great for Strat lovers who love anything rock and metal.

However, unlike the JB, and by extension, the JB Jr., there are some differences between them that might lead you to prefer one over the other.

While they both have balanced mids, the Super Distortion S is a lot more bass-heavy, whereas the JB Jr. has an emphasis on the treble.

The result is fatter and warmer in contrast to the brightness of the JB Jr.

Another thing to point out when comparing the JB vs. Super Distortion is that the latter is a ceramic magnet, which tends to have a higher output than the Alnico ones.

Either way, they’re both hot pickups that can give your Strat the boost that it needs and deserves.

The DiMarzio Super Distortion S makes for a great neck pickup too, and having a combo one in the neck and bridge is one that you can’t really go wrong with, but you’re also encouraged to check some of the other many possibilities out there too.

Super Distortion S pickups in the bridge are often combined with a variation of other outstanding DiMarzio pickups like the Chopper, Cruiser, Fast Track 1, Pro Track, and the Air Norton, to name a handful of suggestions.

Naturally, they all have different characteristics, and some might suit your tastes better than others.

The next single coil humbuckers in this guide might not have been based on famous pickups that have been used on a ton of hit records, but these are great for the money.

These Wilkinsons are great pickups for those who want to upgrade a cheap guitar and don’t really want to shell out the cash for some of the other brands out there.

Seriously, one Low Gauss Hot Rail is a fraction of the price of the Seymour Duncan or DiMarzio, and you can actually find a complete set for around $50!

I don’t know about you, but to me, that’s amazing.

Make no mistake, though, even though these pickups are affordable, that doesn’t mean they are low-quality, and Wilkinson is a reputable brand. They aren’t as known for their pickups, but if you’ve been a Strat player for a while, you may have heard of their replacement bridges and tailpieces.

I couldn’t find an exact EQ curve for these pickups, but from my experience with these, they will retain a lot of the sound qualities of your Stratocaster but will make it noticeably beefier while canceling out the noise, and in a lot of cheap Strat-copies, this can be an issue, especially with the stock pickups.

These are also ceramic pickups, so you’ll definitely be getting more output, too.

Overall, these single-coil humbuckers will make your Strat scream and sing at the same time.

Admittedly, these pickups aren’t better than the previous two, but they are the best for individuals who are on a tight budget and don’t want to throw a bunch of money at upgrading a cheap Strat.

If this sounds like you, they will certainly be noticeably better than what’s in your guitar right now.

Regular single-coil pickups are cool, and they definitely can be suitable for metal – just look at Yngwie Malmsteen.

However, if you’re looking to add some more oomph to your Stratocaster or Strat-copy, single-coil-sized humbuckers are what you should consider adding to your guitar.

In this guide, I recommended some of the top single coil humbuckers on the market, and while there isn’t a huge selection of them out there compared to their counterparts, these are some of the most popular ones.

It’s almost impossible to go wrong with Seymour Duncan or DiMarzio pickups, and if those are a bit outside of your budget, the Wilkinson ones are an affordable alternative.

With that in mind, I hope either of these wind up being the perfect single-coil-sized humbucker pickups for your guitar and give your Strat the extra power you’re looking for in the kind of music that you want to play.