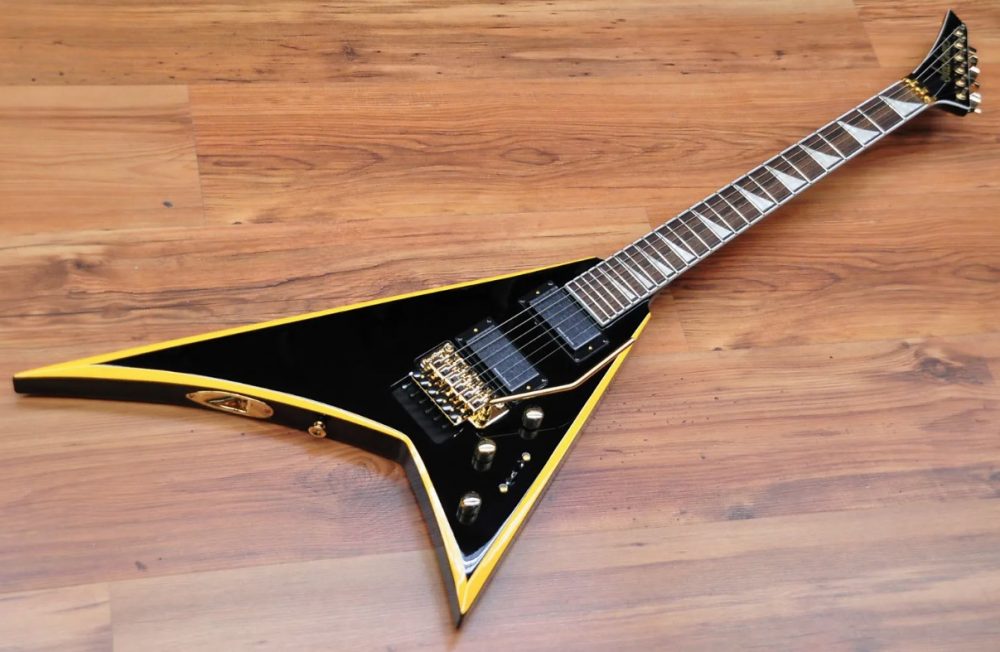 V-shaped guitars are some of the most incredible designs, and their popularity over the decades definitely reflects that! In this article, you will find a handful of great V guitars from the top brands that you can pick up for under 1000 bucks, so you can start rippin’ in style while staying within a specific budget.

When people think of V-guitars, the Gibson V model is often the first one to come to mind. After all, it did come first, too, in 1958.

As you might be aware already, Gibson guitars of any kind can be incredibly expensive. Thankfully, we also have Epiphone, which Gibson owns, to provide us with budget-friendly versions of well-known guitars like the Les Paul, SG, and, of course, the Flying V.

Compared to Gibson Flying Vs, which can run you two grand or more, this Epiphone Flying V, which is based on the ‘58 version, will cost literally a fraction of that at around $700! It’s definitely one of the cheapest Flying Vs that you can get your hands on that’s not a knockoff brand – here are its specs:

This Epiphone guitar replicates the classic sound and feel of the original very well, so if that vibe is exactly what you’re looking for in your guitar, this is as authentic as it gets for under a thousand bucks!

Since the previous section discussed them fairly well already, Epiphone is a brand that doesn’t need another introduction here. However, the Flying V Prophecy does need to be addressed since it has notable differences from the classic Flying V mentioned before.

People might first notice the V Prophecy’s sleek appearance, which consists of an aged glossy black paint job, gorgeous mother of pearl with abalone block inlays on its slimmer neck, and binding around the instrument.

In addition to this updated design that still stays mostly true to the original shape, some notable features here help it stand out and allow it to be a modern-day version. Here’s what you can expect:

I think the Fishman pickups are a terrific addition to this guitar, and the Fluences are easily some of the best metal pickups ever but are actually incredibly versatile and innovative at the same time. For a Flying V under a grand, this is easily one of the best and ideal for those who have performance in mind.

Speaking of performance, the next guitar on this list was designed for one of the greatest guitar shredders of all time, Alexi Laiho, who unfortunately passed away at the end of 2020.

Alexi Laiho’s legacy is his former band, Children of Bodom, where he was the primary songwriter, lead guitarist, and vocalist. He was a real modern-day guitar hero and hugely impacted me and many others, especially during the 2000s.

Regarding his guitars, Alexi used Jackson Rhoads for a long time before he became endorsed by ESP guitars and designed a signature guitar with them. These bear many similarities with his old Jackson guitars and only feature one guitar pickup in the bridge position. For many years now, you can find affordable LTD versions of his signature guitar, including the Alexi-200, which has these features:

Overall, this is a bare-bones metal machine, and the single pickup and volume knob definitely reflects that, and a lot of people only really need that to get the sound they want. My main critique is that I wish it had pinstripes on the body like most of his other signature guitars in the past, but nonetheless, this guitar is still amazing and made for shredding!

Another signature guitar that has made it to this list is Scott Ian’s Jackson King V. Many prolific guitarists over the years are known for playing King V guitars, like Dave Mustaine of Megadeth and Robbin Crosby of Ratt, whom this guitar was created for in the first place.

Yet, to me, it seems like one of the more underrated guitar designs out there, and in a guide dedicated to V-shaped guitars, the King V naturally deserves some love. Here, I’ve selected the Scott Ian Signature Model, that’s part of the X-series line of Jackson guitars to represent the best King V under 1000 dollars.

In case you don’t know, Scott Ian is one of the guitarists in the legendary thrash metal band Anthrax, who is a member of the Big 4, alongside Slayer, Megadeth, and Metallica. When it comes to King V guitars, I think his signature one is quite unique in that it looks like a cross between Jackson King V and a Gibson Flying V, but it has features that are characteristic of Jackson guitars for sure. Here’s a brief overview of what this guitar offers:

Like the LTD Alexi 200, this is an excellent budget signature guitar that’s well-suited for metal. Once again, I think it’s cool that this guitar pays homage to the original Gibson Vs while keeping that Jackson edge that the brand is known for. However, if you’re looking for a more standard-looking King V, you can also look into the JS32, X, and Pro Series ones, but be aware that these are both at different price points.

Lastly, any content that’s revolved around V-shaped guitars is not complete without talking about the Rhoads V. This model is arguably the most popular of them all, which is evident by all of the variants out there and all of the other brands that have made their own that are inspired by it and it’s asymmetrical wing design.

This is a timeless guitar style that Randy Rhoads first developed in collaboration with Charvel guitars in the early 1980s. Following a series of prototypes, the Rhoads that most people are familiar with was eventually finalized and released under the Jackson name after his untimely death in a plane accident in 1982.

Over the years, however, there have been a ton of different RR24 models that have been created for people who have specific budgets. For people who are looking for an excellent guitar that’s just under 1000 dollars, the X-series one easily takes the cake. So let’s dive into its specs:

Unlike some of the other guitars in this article, I appreciate that Jackson offers this guitar in a variety of colors. My personal favorite is the one with the yellow bevels and the gold hardware, which is reminiscent of one of Alexi Laiho’s custom Rhoads that he had back in the day before going to ESP, but you might enjoy some of the other colors even more.

There you have it! These are some of the best V guitars you can get that you can pick up for between 500 to 1000 dollars and should be able to serve you for a long time.

These are by no means entry-level guitars, but they are at a price point that’s appropriate for the masses, mainly those who have been playing for a while and want a real workhorse that won’t cost you a huge fortune.

However, if you are looking for a V-guitar that’s even more budget-friendly, you should check out my guide to the best Jackson guitars under $500. Here you’ll be able to learn more about both the JS32 King V and the JS32 Rhoads, which are great value instruments.

No matter which style of V-guitar you go for, I hope that any of my resources will help you find the one that resonates most with you. Countless others have chosen a V in one form or another and have been loyal to them for their whole lives, and who knows, you might have that affinity as well if you don’t already!