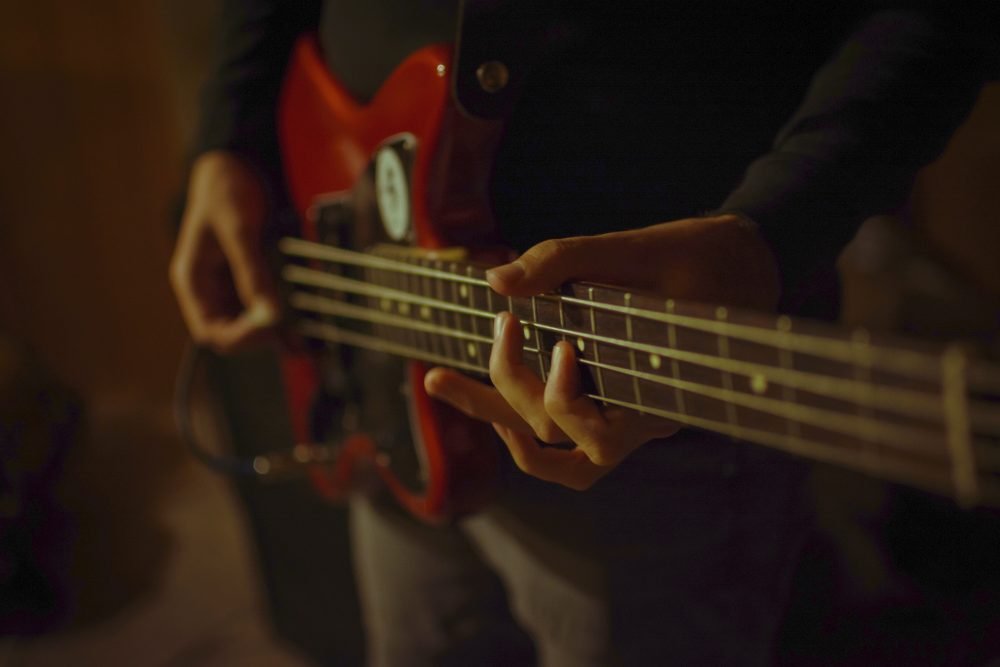 An endless debate that has existed regarding bass playing is the question of whether or not you should use a pick when playing. In this article, I discuss some important points as to why playing the bass with a pick is helpful so that you can decide for yourself if it’s a style that’s right for you.

Is It Bad To Play Bass With A Pick?

Simply put, there is nothing wrong with using a pick to play the bass.

Sure, it can make executing certain lines and passages easier, and you’ll potentially be a lot faster with a pick vs. using your fingers, but is it cheating to play bass with a pick? Absolutely not.

Instead, you should look at it as a technique that offers its own set of advantages and drawbacks, just like fingerstyle playing does.

Here are a few reasons you should learn how to play bass with a pick if you haven’t already:

As you continue to read, I’ll talk more in-depth about these topics, so you can understand what these types of benefits of playing with a pick on a bass guitar entail.

Playing with a pick gives you a different sound than fingerstyle, plain and simple.

It has a sharper and more defined attack than your fingers, and it also opens up some options regarding articulation.

For example, a plectrum will make it much easier to do things like down-picking and palm muting simultaneously, giving you a tighter, precise, and percussive sound that is can be more difficult to achieve with a fingerstyle technique.

These types of benefits can actually help some bass players stand out in the mix more too.

Of course, the EQ and volume settings will matter the most in a mix, but the brightness and clarity of the pick attack can make the notes pop up more, particularly when you’re behind a wall of heavily distorted guitars.

For this reason, learning to play with a pick can be useful for the recording process, especially for metal music. It will also be painless to edit your tracks in the studio because you can see the pick attack or impact of the sound around the transient in the audio waveform.

Check out this video comparing fingerstyle vs. pick, so you can see how different they sound even when playing the same bassline:

Fast playing isn’t everything, but who isn’t looking to improve their speed and technique?

Doing so only opens more doors to what you can play, and a pick can undoubtedly help with this.

Even though It is totally possible to get ultra-fast playing with the fingerstyle technique and there are plenty of virtuosic players out there who do it, like Felipe Andreoli, Alex Webster, John Myung, Steve Harris, and Billy Sheehan, most people will be able to reach these speeds significantly easier with a pick.

I’d actually argue that certain speeds are only achievable with a pick. For example, tremolo picking 16th notes at 200 bpm with your fingers with good volume and definition is unreal.

To get super-fast with fingerstyle, you must play with a very light touch, and unfortunately, this can cause players to sacrifice volume and dynamics for the sake of speed. In my opinion, there’s no point in being fast if the notes aren’t being heard clearly.

Getting fast with a pick does take practice with a metronome to develop technical efficiency, but from my experience and seeing others work at it, it takes much less time. Additionally, they can still apply volume and articulation while they’re at it.

Picks also tend to be less tiresome for many people, provided that you’re applying the appropriate amount of tension in your hands. Additionally, being less fatigued means you’ll be able to play for more extended periods.

Perhaps all of these benefits are where the idea that using a pick for bass is considered cheating comes from?

Nonetheless, if you need a way to keep up with the guitars in the band, this is your best bet if you want to get there quicker.

If you’re a fingerstyle bass player, a pick is just another tool in your arsenal. Just like the slap technique, you don’t have to learn it, but would it be helpful? Most likely.

Having different techniques at your disposal allows you to be more flexible with what you play and figure out what sounds good to you and suits the song best.

Certain songs sound better with a pick and others with fingers, and a lot of great music was created with both techniques over the years and continues to be.

So, if you’re normally a player who uses your fingers, ignoring the use of a pick because you or others think it’s cheating is just limiting your options.

Conversely, if you’re a guitarist who has transitioned to bass recently and you’re unsure if you should stick with the pick, I recommend keeping your plectrum chops up, but it’s also advised that you take the time to explore fingerstyle too.

If you prefer one style over the other and play with that one more, that’s fine, but it’s a good idea to be proficient with different techniques because you never know when you’ll need them.

It’s never a bad thing to become a more diverse and well-rounded player!

Do you want to play the pick with the bass? Then that alone is enough of a reason to do so.

Aside from the strong reasons discussed in this article, I think playing with a pick is simply fun and enjoyable, and it feels great, and, therefore, it’s in my assemblage of bass accessories. Then again, I also play guitar, so I’ve always had picks handy.

That being said, many notable players have built their careers with a pick; if you have a favorite bassist who uses one and their sound inspires you to play the bass, then, by all means, do so.

While it’s good to be versatile, and I strongly suggest it, it’s better to appreciate the bass on your own terms. If you exclusively want to use a plectrum because it gives you the most joy and satisfaction, that’s the most important thing.

Similar dilemmas will always come up; for example, you might enjoy playing 5-string basses more than 4-string ones, or vice-versa; it’s all a matter of preference.

Playing how you want to play will keep you playing longer than being forced to learn a style or technique that you’re not interested in practicing. At that point, it becomes a chore.

Don’t let any music snob tell you that anyone who uses a pick is not a real bassist or an unskilled musician because it has been proven time and time again that is simply not true.

Hopefully, the topics discussed here have given you a better insight into some of the benefits of playing bass with a pick and why you should think about learning it.

Is using a pick easier than fingerstyle in a lot of ways? Yeah, it can be, but who cares? It still takes practice to get good at it if you’ve never learned how to hold a pick before.

If you’re coming from the guitar, consider yourself fortunate that you’ve developed this skill – but be sure to give fingerstyle a chance, too, since it does have its perks and a different kind of sound that you might like.

Ultimately, you can decide what you like to use the most, and you shouldn’t let dogmatic notions about the bass sway your opinion and take away your enthusiasm for playing this great instrument.

Playing with a pick is fantastic, but it can be hard to find the right ones, so be sure to check out my guide to the best picks for bass. There, I will show you some things to look for when trying to choose a plectrum, and you’ll also see a few of my recommendations that you can try out.