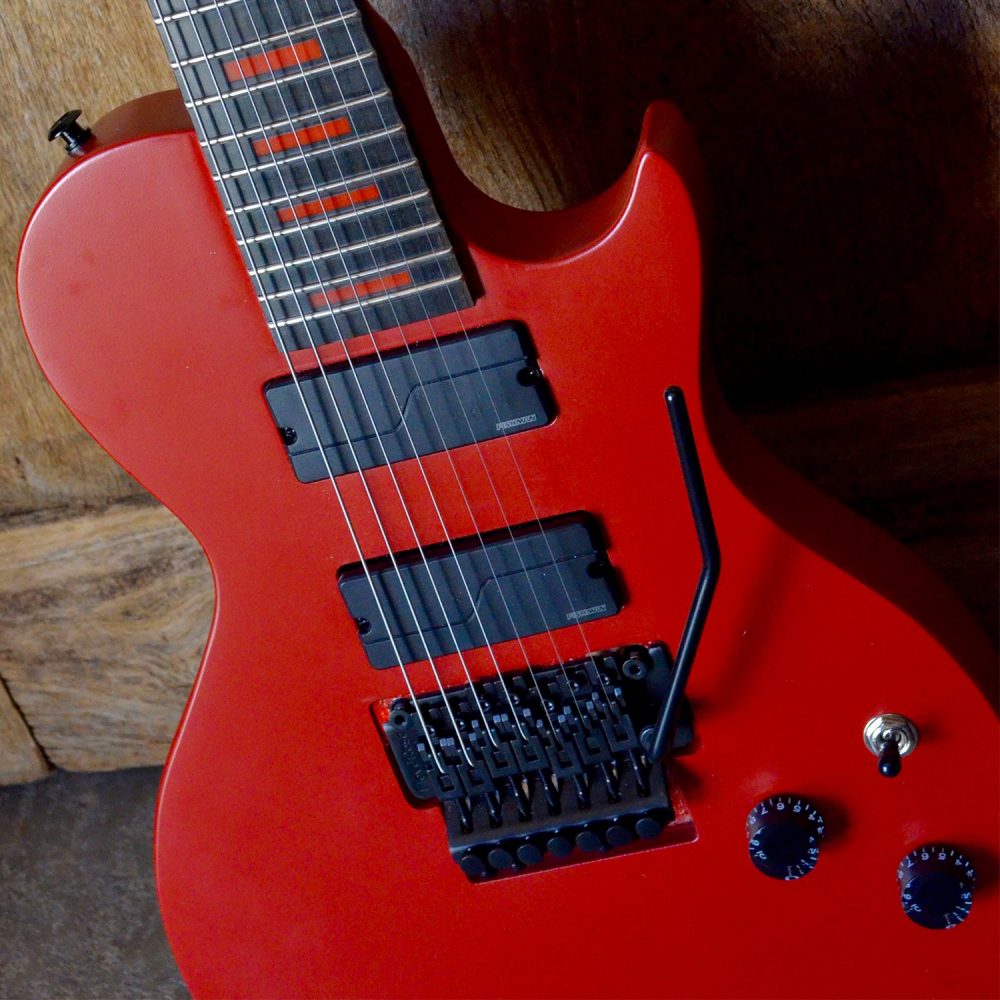 If you’re a 7-string guitar owner and love genres like death metal, progressive metal, djent, and nu-metal, having good guitar pickups can make a huge difference in getting the sound you’re looking for. This article will show you the best pickups for 7-string guitars that will help you get a more aggressive distorted sound and crystal-clear clean tones that you need for different forms of metal music.

It’s nearly impossible to go wrong with Seymour Duncan pickups for metal, but it can be tricky finding the right kind that suits your style the most because there are so many options.

However, in my opinion, out of all of the top Duncan 7-string passive pickups, the Nazgul in the bridge slot is one of the tightest humbuckers you can get.

I do like the Pegasus, too, though, and I think that one is super balanced and versatile, but I think the Nazgul edges it out for being more articulate in the bass response.

However, it also has gnarly high-end, and one criticism people have with the Nazgul is that it can be too harsh for some styles. So, if this concerns you, and you don’t necessarily need the most aggressive guitar tone, you might be better off with the Pegasus instead.

One thing that these bridge pickups have in common, though, is that they’re basically always paired with a Sentient neck pickup.

Seymour Duncan describes this pickup as one that’s comparable to the Jazz and ‘59 pickups, which I tend to agree with since I’ve had those in multiple guitars. It’s smooth and rich, but it’s also articulate at the same time, making it an exemplary neck pickup for a 7-string.

If you’re looking for a Seymour Duncan 7-string pickup set that is more catered to djent and modern metal specifically, the Seymour Duncan Alpha & Omegas should also be considered. These are the Mark Holcomb signature pickups, who plays in Periphery.

It has those tight mid and low-ends that you want, but it’s also a very bright and clear pickup as well since it’s designed to bring clarity to those big complex chords that Periphery and similar bands use.

The king of prog metal himself has used many different DiMarzio pickups over the years, but nowadays, John Petrucci has his own passive pickups that were designed for him – the Dreamcatcher in the bridge and the Rainmaker for the neck.

The Dreamcatcher bridge pickup is a more mid-focused one while also favoring the low-end more than the treble, and therefore, it offers a more rounded tone rather than one that is too shrill or too muddy.

To complement this pickup, John and DiMarzio came up with the Rainmaker, which is almost completely balanced on the EQ spectrum. Like the Dreamcatcher, the Rainmaker is curved more towards the mids and lows, but ever so slightly, which gives you a warmer tone, overall.

As you can probably gather, these probably aren’t the tightest pickups and offer a darker tone as opposed to a very bright one. Nonetheless, these are still some of the best passive pickups for 7-string guitar players that are interested in a more classic guitar tone suitable for those older progressive metal styles, such as Dream Theater.

However, these are still very capable pickups for modern styles too, but probably not ideal for djent or death metal.

A DiMarzio pickup that’s more suitable for those types of subgenres is the Titan. The DiMarzio Titans are the signature pickup set of Jake Bowen of Periphery, who is actually the nephew of John Petrucci.

The Titan-7 bridge pickup dials back on the bass and mids and takes the treble up a notch, whereas the Titan-7 neck version is very similar to the Rainmaker but has slightly less bass and a little more treble instead.

At the end of the day, it depends on your personal style, but if you need something more aggressive, you might be better off going with some of the other pickups on this list.

Periphery has been brought up quite a bit so far, and for a good reason – they’ve revolutionized modern metal and influenced how people approach guitar tones.

Therefore, this guide wouldn’t be complete if I didn’t bring up Misha Mansoor, and one pickup brand that has grown a lot over the years alongside Periphery is Bare Knuckle pickups. So, in a list discussing pickups for extended ranged guitars, progressive metal, and djent, it would be very wrong of me to leave them out as well.

I know that Misha has used different Bare Knuckle pickups on many of his guitars, but nowadays, he has his own signature pickups with them called the Juggernauts.

The Juggernaut set is very versatile and designed to accommodate the different types of sounds that Misha uses in his music, but most importantly, does it djent?

Of course, it does; if anything, this is one of the best 7-string pickups for djent.

The name of this pickup would be a lie if it didn’t have the ability to create a huge crushing rhythm guitar tone needed for this kind of music. But no worries there – it clearly lives up to the name while also allowing you to get those lovely cleans too.

Alternatively, you can also go for the Bare Knuckle Aftermaths, which are also an amazing pickup for modern metal. In fact, Misha also used these for a while in his guitars too.

Those pickups are thick, punchy, tight, and perfect for anyone who likes djent and metalcore, but honestly, Bare Knuckle has many amazing pickups that you should look into; the ones here are just some solid suggestions.

Ah, the EMG 81, one of the most popular metal pickups of all time which has been seen on countless records, has a 7-string version too.

One of the things that have always set EMG apart from other brands is that they are active pickups, which means that they have a power source, such as a battery, supplying energy to the pickup.

They also have a built-in preamp, which means fewer coils, but when powered up, they can produce a higher output than passive pickups, but they also compress the signal.

This results in a less dynamic response range, which is why active pickups like the EMG have a reputation for being sterile. Some people hate this, but there are definitely just as many people who do not mind it at all or even prefer it because it does have some advantages.

The EMG-81s are super clear and defined almost have a “glassy” quality to them, and when combined with the higher output, people can retain this clarity at higher gain and volume, and these are some of the main reasons a lot of people love EMGs and consider it the best active pickup for metal.

The 81s are killer when placed in both the bridge and neck positions, but you can also check out other combos as well.

For example, an 81 bridge pickup and an 85 or 60 neck pickup are also popular and can offer some extra versatility.

I recommend EMG 81s for people who love thrash metal, death metal, deathcore, metalcore, and are looking for more of a traditional tone. Since they are active pickups and lack dynamics, however, I wouldn’t be able to recommend these for djent and stuff like that.

Fishman is one of the biggest innovators in guitar pickup design these days, and this is especially evident with their Fishman Fluences.

So what makes Fishmans different? Well, Fishman Fluences are active pickups in that they are powered up, but they sound a lot like passives, and they are marketed as “multi-voiced.”

You can actually switch between two different voicings on these pickups by toggling between them on your tone knobs, similar to how a lot of guitars have a coil-split that you can push and pull to get a single-coil guitar pickup sound.

On one of the settings, you can have that boosted sound of an active pickup while you can have the fantastic response of a passive on the other. However, what makes these pickups truly great is that even when on an active voicing, you still don’t lose out on the dynamics, which, as mentioned before, is a common complaint about traditional active pickups like EMGs and Seymour Duncan Blackouts.

Another aspect of Fishman Fluence pickups that makes them revolutionary is that they don’t use copper coils and use a patented “Core” circuit board design, which not only allows for the multi-voicing capability but also helps provide consistency.

Pickups that use coils can vary slightly from one another, but this can create tonal differences that can be problematic for people who have want to dial in the perfect tone on stage or in the studio every time. Fishman solves this problem entirely with their engineering.

As for the best Fishman pickups, the Fluence Modern 7-string pickups are amazing for, you guessed it, modern metal, but honestly, they’re so versatile that you can use them basically anything. I highly recommend that you purchase them as a set – the bridge pickup is a ceramic one, whereas the neck one is alnico and complements the former flawlessly.

There are a ton of great and notable guitarists who use Fishman Fluences, and some of them even have their own signature models that you can find for 7-string guitars like the Javier Reyes and Tosin Abasi pickup sets. So, if you like Animals as Leaders or similar bands, these ones might also be worth checking out.

Finding the perfect pickup can be somewhat nerve-wracking, but hopefully, this guide to the best 7-string pickups for metal has given you some ideas on what you should put into your guitar to achieve your dream tone. However, if you haven’t found the exact one here, perhaps these will lead you in the right direction to one that suits your personal needs.

That being said, these 7-string guitar pickups are extremely well-regarded in the metal community, and regardless if you’re busy playing shows or recording tracks, or you simply want to replace the stock pickups that aren’t cutting it, these can certainly help take your guitar tone to the next level.