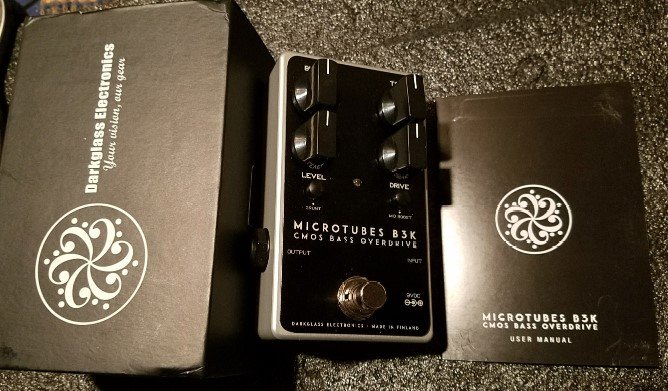 Using a bass overdrive pedal can be a valuable tool for getting you the tone you really want, especially if you enjoy rock and metal styles. While clean tones are amazing, an overdrive can add more grit to your sound. In this article, I will share some of the best bass overdrive pedals that I’ve come across so that you can get the messy tone that you’ve been missing out on.

Overdrive vs. Distortion and Fuzz Pedals For Bass

Although they might be similar in some ways, overdrive and distortion are two different effects used in guitar and bass playing.

Unlike distortion pedals, which are much more aggressive and completely alter your tone’s signal, overdrive is an effect that simulates the sound that you get when you crank a tube amp way up.

In a sense, overdrive is distortion; however, try to think of overdrive as mimicking the sound of your amp being pushed to its limits, whereas distortion pedals create an entirely new one by clipping the signal.

Both types of pedals are excellent for guitarists, but overdrive tends to be the preferred one when it comes to adding some dirt and grit to a bass tone. Distortion pedals for bass do have a place in some situations, but it often makes the sound too unclear.

Fuzz is also a much more extreme distortion that has been used for some iconic riffs and basslines due to its unique sound.

An excellent example of this is Muse songs like Hysteria and The Handler. When pushed to their limit, many distortion pedals can create a fuzz tone, but there are fuzz pedals out there, like the Big Muff, that are specifically designed for this type of bass tone.

Nonetheless, overdrive gives you enough flexibility with your sound to where you don’t necessarily need to sacrifice a lot of cleanliness in order to have an edgier sound. They are a lot more versatile, in my opinion.

Check out this video to see what I mean:

Why You Should Use Overdrive Pedals

Overdrive will be ideal for bassists in just about every situation that calls for one. For a lot of you, overdrive may very well become the bread-and-butter of your sound, and for others, it may just be a niche tool for certain parts.

Regardless of when you use it, it’s always good to have one available to you, and next, you will read about some of the best overdrive pedals that will serve you well.

I love Boss products, and they have been a top choice for most of the guitar pedals that I’ve used. Naturally, I gravitated towards them for bass pedals, and as expected, I was not disappointed with their bass overdrive pedal.

Boss has a reputation for consistently putting out reliable stuff, and the OBD is no exception! It has been the go-to overdrive pedal for bassists for many years.

With that said, let’s talk about some of the features that this thing has.

The OBD-3 has four basic control knobs to help you dial in the tone that you want:

The Level knob is basically your volume, and the bottom three are what will allow you to change up your sound the most – the EQ lets you manage your lows and highs, and the balance and gain knobs control the intensity of the overdrive.

With this pedal, you can have a subtle dirtiness to your tone, or you can fuzz it up by turning that knob towards the max.

This pedal can do it all, and it’s simple to use and play around with, which is why it easily makes my list.

This flexibility is what sets it apart from its direct competitor, the MXR M89. The MXR is still a decent pedal that is worth a mention, and it sounds warm, but I just prefer the Boss OBD-3  more because it seems less muddy.

Ampeg is a brand best known for its bass amps, but they also make fantastic pedals, like the Scrambler.

It’s also nice that, like their amps, these ones are also catered to the bass guitar. Therefore, even though Ampeg isn’t the most prominent name for effects pedals, you’re still getting a very solid product designed specifically for bass guitarists.

The Ampeg Scrambler has a lot in common with the previously mentioned Boss overdrive pedal. It has four knobs that have slightly different wording:

The drive is equivalent to the gain, the blend is most similar to the balance in that it gives you control of the dry signal, and the treble knob allows you to control that specific frequency in the tone. Unlike the Boss, you only have one knob to control the EQ, but it still gets the job done very well.

So what separates this pedal from the Boss? Not a whole lot in terms of features; however, the Scrambler is still a very flexible pedal. I think some people would like this one more due to aesthetic reasons, and it does sound a bit warmer than the Boss, in my opinion.

The Tubescreamer is one of the most famous guitar pedals of all time and one of my favorites, so I was glad to try one out that was designed for bass.

Like the Tubescreamer for guitar, this bass pedal is perfect for old-school metal tones that used overdrive, especially for thrash and groove metal, like Pantera.

The Ibanez Bass Tubescreamer, instead of having four controls like the previous pedals, has five, but don’t worry – it doesn’t overcomplicate things. In fact, they’re almost identical. You have:

At this point, you’re probably already familiar with what the first four knobs do, but these manufacturers like to switch up the wording on them. For example, the “mix” knob is the same as the Boss’ Balance and the Ampeg’s Blend in that it controls the dry signal.

What I like most about the TS9B is that it is the most natural-sounding pedal of its kind. I hope that one day this pedal reaches the same legendary status as its guitar pedal counterpart.

Like Ampeg, Aguilar is a brand known for its excellent bass amplifiers,  but they also make high-quality pedals too.

This bass overdrive pedal by Aguilar is literally made of steel, so you know it’s incredibly well-made, but how it sounds is more important. So how does it stack up against everyone else?

First of all, this pedal’s tone is mainly derived from the saturated channel of their now-discontinued AG500 amp head, which the AG700 has replaced. Both are high-end amps with some of the best tones I’ve ever heard. So to have a piece of it at a fraction of the cost is pretty nice.

This pedal has four knobs like most of the others we’ve talked about, but they do slightly different things this time around. The Agro’s knobs are:

The level is self-explanatory, and the saturation is what gives you control of how much overdrive you want to use, but the presence knob focuses on the mids rather than the bass and treble like the other pedals.

With presence, you have the option to scoop the mids (which refers to a technique on an EQ where you cut the mids, leaving the bass and treble, giving it a “scooped” appearance visually). Alternatively, you can bump it up and give yourself a boost in that frequency range.

Contour is what shapes the attack of your tone and lets you have the most definition possible, even if you have the overdrive cranked super high.

With these perks, the Aguilar Agro does everything you would want an overdrive pedal to do, plus more. Flexibility is always a good thing, and this pedal sounds terrific, so it’s definitely earned a spot on my list.

The Darkglass Microtubes B3K, or the B3K for short, is my number one choice when it comes to the best bass overdrive pedals on the market. There is a reason why I posted the video of it very early on in this article to demonstrate what a great bass overdrive is capable of doing.

However, I want to point out that the Aguilar pedal does come really close, and they are often considered to be competitors.

Darkglass Electronics is a fairly young company based out of Finland that was established in 2009, which is very recent compared to the biggest names out there that have been around forever like Boss, or Jim Dunlop, which has the MXR pedals.

Yet, this pedal and many of their other ones have quickly become noticed and are starting to become the standard, especially when it comes to producing modern metal tones.

It has what you’d expect from one of these pedals, but there are two very unique features to it that none of the others have:

Grunt Switch is designed to give you an even thicker tone than what you already have, and the Mid Boost helps you cut through in that frequency, which is sort of similar to what the Aguilar can do.

Nowadays, in metal production, bass can get drowned out very easily if mixed improperly, and this pedal will help you be heard without having to make you louder. There is a reason why big names such as Periphery have used Darkglass for their bass tones.

Overall, the B3K is considered one of the priciest bass overdrive pedals, but it will be worth it, depending on your goals. If you want the “cream of the crop” and intend on having outstanding recordings, this is your best bet.

Whether you’re on a budget or looking for top-of-the-line equipment, you’re going to have a good time with any of these bass pedals. There’s something here that all types of players can enjoy.

I want to point out that a lot of your tone will be coming from your amplifier, so consider that when picking out something you like. Your sound will probably be different than what you hear in the videos, but you should still get an understanding of what you can get out of your pedal.

Secondly, many of these products might not come with a power adapter and may need to be purchased separately, but you can sometimes find bundles. Always make sure that you are using the correct adapter with your electronics. Alternatively, I believe most of these can also work by using a 9V battery. Don’t forget your patch cables as well if you plan on using other pedals along with them!

Nonetheless, with this in mind, you’ll hopefully find the best bass overdrive pedal for your needs and get the tone you are looking for. Even a little bit of dirt and grit can go a long way and add a lot to a song!

If you don’t have one already and you’re looking to beef up your tone even more, consider looking into a 5-string bass. Here is an article regarding their pros and cons, but I think they can be a powerful addition to any bass player’s collection.

You may also find top picks for 5-string basses under $500 helpful if you’re on a budget and curious to see what some of the best options are in this price range.