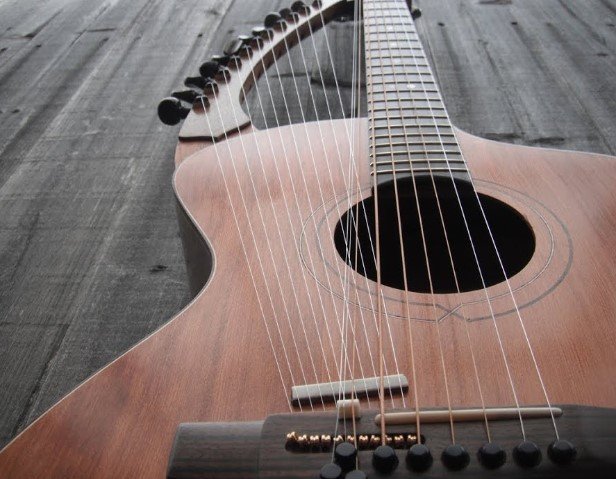 Many guitarists have been fascinated by the use of exotic guitar scales over the years and have tried to find ways to incorporate them into their style. They offer a different flavor that you won’t typically find in Western music. Sure, we have the Harmonic Minor scale and its modes, as well as the Phrygian, which can sound Egyptian and Spanish, respectively. These ones are cultural treasures that have become excellent tools for many guitarists to create licks that awe and inspire, and by learning them, you can do the same.

What Are Exotic Scales & How Do You Apply Them?

Exotic scales are generally referred to as any set of pitches in a sequence that does not have origins in Western music. Therefore, many of them come from the Far East, the Middle East, the Balkans, and many more!

This doesn’t mean that these can’t be found in Western music though. Some may even be a mode of a Western scale; for example, the Charukesi scale is technically the 5th mode of the melodic minor scale that is often used in jazz music. In the Western world, it would be called the Mixolydian flat-6, but in India, where it comes from, it’s known as the Charukesi scale.

Another good example is the traditional Chinese scale. Although I don’t go over it in detail in this guide, it’s simple enough to explain. This one is identical to what the West calls the major pentatonic, so if you’re familiar with your pentatonic scales used in rock and blues, you already know an exotic scale and have a leg up on this kind of material.

Learning how to use exotic guitar scales effectively comes with experience and some trial and error, but I do have some advice on how you can do it.

The main thing you should look at is your chords and the harmonic context. Many foreign scales have an innate minor tonality to them, and a lot of them fit seamlessly over minor chords or power chords, depending on the key of the song.

You should also look at the notes that the chords are using. Does the scale utilize most of the notes in it? If so, it will more than likely work just fine. However, creating dissonance can be an amazing musical tool, and it can be an effective way to bring tension to the piece.

Alternatively, you can build chord progressions from the notes that are used within the scale! It is totally possible to build some major and minor triads with them, but you might have to get creative when constructing other ones.

That’s the beauty of it though – while you’re learning new scales, you can also potentially come across new (and extremely dissonant) chords that you wouldn’t have encountered otherwise if you analyze them closely.

Now that you have a little bit of general information about exotic scales, we can get more into specifics with three of my favorite ones, that I know you’ll also enjoy and want to learn right away.

Originating from Japan, which has a few other traditional scales, this one is easily one of my favorites because it’s one of the simplest to explain and it sounds so cool!

If you’ve been playing for a while and you’re already familiar with the Western pentatonic scales, you’ll pick up this one quickly because the Hirajoshi scale is also only 5 different notes. Pentatonic scales come in different forms and have existed for millennia in various cultures throughout the world.

The Hirajoshi scale is one of them, and to build it, you’ll need to follow this formula:

Having that two full step gap is something that is quite unusual in Western music. That, along with the half steps is what gives this scale its authentic Japanese sound!

Even with fingerings, you’ll also probably notice that it appears fairly different than you standard scales that you’ve learned in the past. It kind of looks like a minor scale but missing the 4th and 7th scale degrees. Here’s a tab that uses a Hirajoshi scale with C as the root note and spans two octaves:

Try it out! You can use this pattern anywhere and switch up the order of things to make your own original guitar licks, just like with any other scale.

Since it’s exotic, you’ll probably come up with something that no one would have ever thought of.

Japanese scales, like the Hirajoshi, have been a crucial part of the repertoire of guitarists such as Marty Friedman. His use of exotic scales has been highly influential on my own playing, and I suggest you check out how he makes it work:

The Byzantine scale, sometimes also referred to as the double harmonic major, is one of the darkest-sounding scales I’ve ever heard. It definitely does not seem like any kind of major scale or mode by traditional standards (major scales and chords tend to sound happy or triumphant).

Unlike the Hirajoshi, which has spaces of 2 whole steps, this one consists of some 1 ½ steps and half-steps to create its sound, which can be described as Arabic or Gypsy at times. In fact, there is just one regular whole step and some parts of the scale display chromaticism.

Let’s take a look at the formula for the Byzantine scale:

The only thing that this scale has in common with your standard scales is that it consists of 7 different notes. Other than that, it is a very unique scale that can really make listeners go “WOW!” Here’s what it looks like linearly in tablature form, centered around C:

The trickiest part about playing this scale is the stretch from the 2nd and 3rd note, which is actually the Whole and ½ step. You can swap the 7th fret on the A string to be a 2nd fret on the D-string, but then you’re left with 4 notes on a single string, which can also be unusual in its own right.

Many exotic scales have a minor tonality to them; however, with the Charukesi scale, which is commonly used in Indian Raga music, is one of the few that I’ve come across that is more like a major scale and possesses those qualities.

In fact, the Charukesi is sometimes called a major scale with a flat 6th and flat 7th, or a Mixolydian mode with a flat 6th. Therefore, if you were to make a formula for it, it would look like this:

This scale plays a lot like your ordinary scales too because it lacks those whole and ½ and 2 step gaps that we’ve seen in the previous two scales. Because it has similarities to Western scales, this one should be easy to learn if you’ve learned your major and minor scales.

Some parts of this scale also remind me of a cross between a major and minor scale too if you look at it in terms of shapes and intervals. Here’s a tab of the Charukesi scale in C:

Because of its features, I think the Charukeshi scale is also one of the most versatile of the exotic ones. Depending on how you perform it, such as where you begin and the order in which you play the notes, you can make it sound dark or sad, or you can give it a more uplifting or fun sound. You can even transition easily between the two emotions, depending on your chord progression.

I think the Charukesi captures the spirit of the Indian culture perfectly especially if you learn how to properly use embellishments such as trills, glides, and droning, and if you’re looking to employ an exotic scale that doesn’t sound totally evil or mournful, this one is great because of its major qualities.

Many people make the mistake of avoiding guitar scales such as these ones because they believe that they are more difficult because they do not originate from the West.

The truth is, you can apply the same rules to learning exotic guitar scales as you would with any other one. Music is universal, and the traditional scales from various cultures can be transcribed fairly accurately. The main exception is with microtones, which are pitches that are smaller than your standard semitones, like the half and whole step.

Regardless though, musicians throughout history have tried to get it as close as possible so that we can apply these scales to the guitar.

There are so many more out there to choose from, and if you’ve enjoyed the ones that I’ve selected for this article, I have a guide that suggests some of the best guitar scale reference books that will not only share some of other interesting scales like these ones, but they also give you many more shapes and patterns to work with.

Nonetheless, I hope you learned something new, and I definitely want you to find ways to apply them effectively. These cool guitar scales will take some practice and getting used to, but they will add a new dimension to your playing by making you think outside of the box and leave your comfort zone.