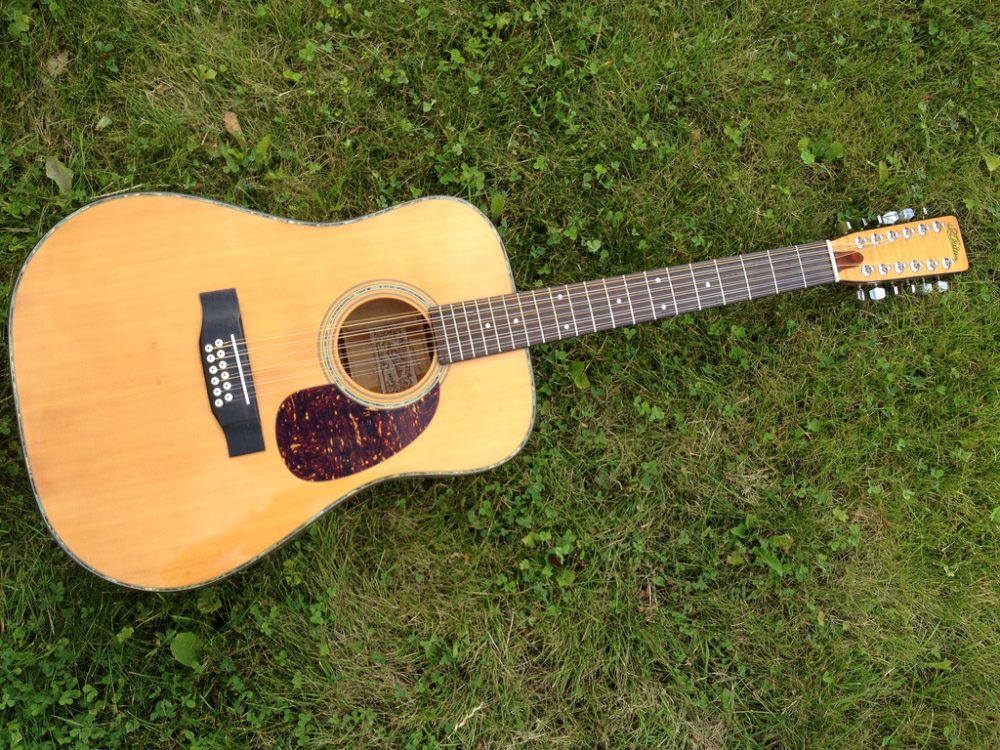 One question I’ve asked myself recently was “why don’t more people play 12-string guitars?” Very quickly, I realized that there is a preconceived notion that 12-string acoustic guitars are harder to play than ones with 6 strings. In my opinion, this is not the case, and in this article, I will explain why and also provide information about how these acoustic guitars work by answering many common questions about them.

6 Strings vs. 12 Strings: What’s the Difference?

When comparing traditional 6 stringed instruments with ones with 12, the obvious difference is that there are double the strings. However, it goes a bit deeper than just adding more to the guitar.

In regards to learning how to tune a 12 string guitar, all of the strings are tuned like your regular 6-string one in standard tuning, but the thinner adjacent strings are tuned one octave higher, EXCEPT for with the B and high-E strings.

Here is a picture of a headstock and some labels so that you can visualize it:

It might sound tricky at first, but hopefully, this image clears things up on how to tune one of these.

The octaves are what gives a 12-string acoustic its beautiful signature ringing tone, and each string is essentially being harmonized with this interval, aside from the high-E and B-strings. Besides some tuning differences, this is one of the main ways to differentiate 12-string guitar from a 6 stringer.

Even if you can tune by ear accurately, I still recommend that you use a guitar tuner so you can confirm that you are tuning the octaves properly. Alternatively, you can also use “octave shapes,” which look like power chords with a skipped string in some positions.

Contrary to what some guitarists think, the string that a note sits on does not signify its octave (the open-E note on the thickest string is not called an E6 or E1, depending on how you view the instrument). Instead, that note is actually called an E2.

So, for that adjacent string, to be one octave higher, you’d need to tune it to E3. You can actually find this note by fretting the 2nd note of the D-string. This is also an E3 because it’s an octave of the E2, as demonstrated by the initial octave shape in the very first measure shown above.

If you insist on tuning by ear, you can use this method, and try to match the appropriate pitches for the brand-new additional strings.

Just keep in mind, the larger the number, the higher the register of the octave. A 24-fret guitar in standard tuning will span across 4 octaves. To put this in perspective, the open-E note on the high-E string is known as an E4. That’s a 2-octave difference from the low-E, despite there being a difference of four strings.

For more information about octaves, this is a great video to consult:

Are 12-String Guitars Harder To Play?

As I mentioned earlier, a lot of individuals, especially new players, believe that the 12-string guitar is more difficult to play solely based on the fact that it does have more strings.

In reality, aside from changing the strings and tuning them up (which can get annoying), there isn’t really anything else to think about when playing this type of guitar. All of the notes are still in the same spots, so this doesn’t require you to alter your chord shapes or play scales any differently.

However, certain things may be a little bit more challenging, and this is more related to the playability and comfortability of the instrument:

Nonetheless, like anything else, it does take time to get used to. Sure, it may feel kind of unusual to play at first like an extended range guitar, but unlike those, you don’t have to learn additional notes and know where they are situated on the fretboard.

What Kinds Of Strings Do 12-String Guitars Use?

12-string guitar strings aren’t any different than regular acoustic ones. They use the same gauges, and you can find them in all of the same materials such as:

Sometimes you may find a mixture of the two. For example, phosphor bronze for the low and middle-end (bottom 4 strings) and steel for the high-end (the B and high-E).

At the same time, because they do have more strings in a package, they can be more expensive than your run-of-the-mill 6-string pack depending on the brand you go for. These D’Addarios are reasonably priced though, and realistically, you probably won’t need to change strings as often as a 6-string guitar, since 12-string ones tend to be more situational.

That’s contingent on how frequently you plan to play your 12-string though.

At the end of the day, just buy the same gauge strings as you normally would; the diameters will be all figured out for you, and a lot of the time they’ll also be color-coded at the bottom, so it’s easy to organize.

Can Beginners Use 12-String Guitars?

Nothing is stopping a beginner from buying a 12-string guitar and learning with it, but I recommend starting out with a regular 6-string one since it will be more comfortable, less frustrating in regards to restringing and tuning, and it’s the most common type, overall.

There is such a thing as being a “beginner to 12-string guitars” though. That is, a player can be somewhat experienced, but have never touched a 12-stringer in his or her life.

Earlier, I briefly mentioned some things that the player will probably have to get used to if they decide to pick up one of these instruments. If you learn with a 6-string first, you already have a headstart because you’ve probably learned the absolute basics already.

In this situation, grabbing a 12-string will be more about getting adjusted to the feel of it rather than learning a brand new instrument from scratch and having to experience any potential discomfort at the same time.

However, aside from the few things I’ve mentioned already, they’re not drastically different at all, and the mental learning curve is basically the same, in my opinion.

Luckily, these instruments can be quite affordable and finding a 12-string acoustic guitar for sale can allow a beginner to get used to it without making a considerable investment. You can find 12-string guitars that are comparable to the price of a standard entry-level instrument.

What Are The Best 12-String Guitar Songs To Learn?

If you’ve been entertaining the thought of purchasing a 12-string acoustic guitar, you’ll probably want to have some songs to learn. Also, in the event that you are unfamiliar with the instrument and don’t know what it sounds like, it’s good to learn about which songs use a 12-string in them, so you’ll be able to identify it easier.

Based off of the top of my head, these are some classic songs that notably use a 12-string in them:

I’d like to think that most people have heard at least one of these songs, but even if you haven’t you can listen to them here, plus even more!

Being intimidated by 12-string guitars is a fairly common thing, but hopefully, after reading this guide, you’ll realize that aside from a few quirks, it’s very similar to a 6-string one.

The main things that you will need to need to get used to if you find a 12-string guitar for sale that you really like are:

Once someone becomes accustomed to these aspects, more than likely he or she will understand why 12 string guitars aren’t harder to play in the grand scheme of things.

People also sometimes erroneously lump 12-stringed guitars with extended ranged instruments, like 7 and 8 stringers, but these guitars have one fundamental difference – 12 string guitars aren’t adding new strings that give the instrument more notes to work with; instead, they’re supplementing the 6 that are already there and work in harmony with them.

Essentially, there’s nothing really new to learn, note-wise. All you need to do is tune it properly, and you’re set. The new strings are played simultaneously with the preexisting ones.

The shimmering sound of these instruments makes them unique, and they have earned their place on many hit songs. Will you create the next best song with one? You’ll never know unless you give the instrument a chance, and I assure you that they’ll make an enjoyable part of your guitar family with a little bit of time.