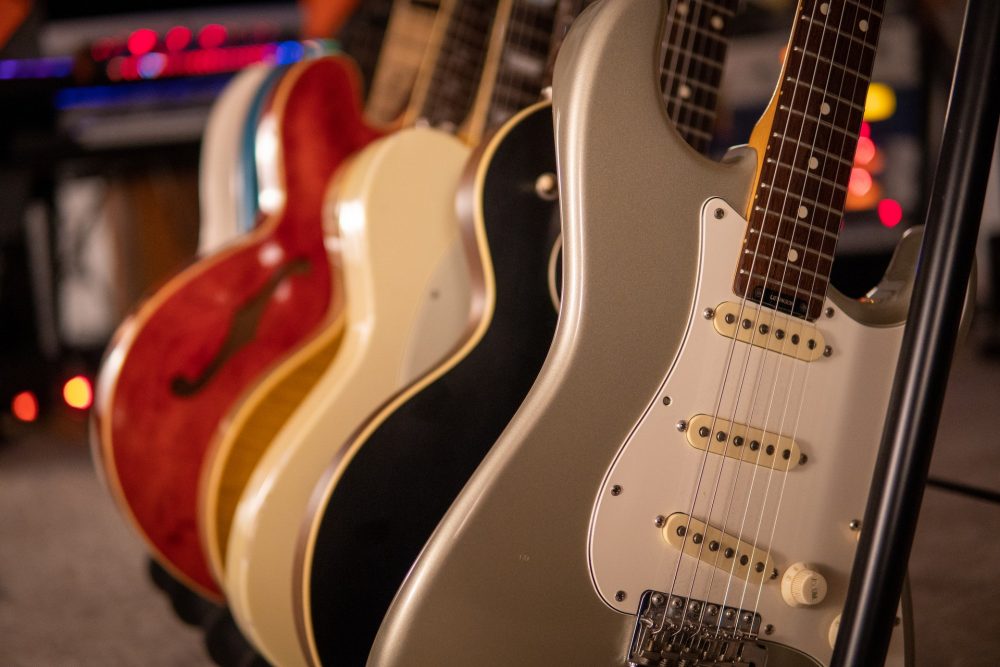 Electric guitars can come in different shapes and sizes, and construction varies from brand to brand, and naturally, things like wood and hardware can also impact how much they weigh.

Whether you’re looking to find a lightweight instrument or you’re just curious about some of the statistics, this article will cover the weights of several of the most popular electric guitar models on the market to give you a better idea of how they differ from one another.

1. How Much Does A Fender Stratocaster Weigh?

One of the most iconic guitars of all time, the Fender Stratocaster, weighs around 8 pounds or roughly 3.6kg, which is right around the average of most electric guitars, in general. It’s pretty easy to find ones that weigh a little less or more, though.

In addition to its versatility as an instrument, comfortability is one of the reasons why so many people love Strats, and weight is a contributor to that. It’s also most likely why most guitars from other brands hover around that weight too.

2. How Much Does A Fender Telecaster Weigh?

Aside from aesthetics, pickups, and overall sound, the Fender Telecaster has much in common with Stratocasters, including weight. Telecasters weigh 8 lbs (3.6kg) on average, give or take a pound.

In reality, the Telecaster came out first in 1951, and Fender wanted to keep many of the same standards, so when the Stratocaster came on the scene in 1954, you see a lot of the same qualities between Strats and telecasters.

3. How Much Does A Gibson Les Paul Weigh?

The Gibson Les Paul shows that having a lightweight isn’t everything when it comes to a great guitar. The Gibson Les Paul weighs around 9 to 10 lbs (4 to 4.5 kg) on average, but it’s not unusual to find ones that weigh up to 12 pounds which is nearly 5.5 kilograms.

Millions of people love the robust nature of the Gibson and Epiphone Les Paul, and not only does it feel powerful, but it also sounds that way as well. The way they’re built, which is why they weigh more, is why it has the reputation it does.

4. How Much Does A Gibson Flying V Weigh?

Unlike the Les Paul, the Gibson Flying V is actually considerably lighter because its body is thinner, and naturally, less wood usually means less weight. It’s kind of deceptive because the body shape appears longer, but Flying V guitars are generally 7 or 8 lbs (approximately 3 to 3.6 kg).

While the Les Paul is known for its thicker sound, the Flying V is still a metal machine that still gets a lot of respect for its power.

5. How Much Does A Jackson Soloist Weigh?

Along with Charvel, Jackson is one of the godfathers of the superstrat design that were incredibly popular in the 80s and still to this day. Jackson Soloists are high-performance guitars that typically weigh around 8 to 10 lbs (3.5 to 4.5 kg), but some models can push close to 15 lbs too.

The Jackson Dinky is similar to Soloists in many ways, but their construction sometimes lends to them being a slightly more lightweight guitar – usually about 8 to 9 lbs. They are also a lot more affordable too!

6. How Much Does A Jackson Rhoads Weigh?

Similarly, the King V weighs about the same as a Rhoads, as well as Jackson’s other popular designs like the Kelly and the Warrior.

7. How Much Does A Charvel San Dimas Weigh?

Due to Charvel’s historical connection with Jackson guitars, Charvel guitars tend to weigh pretty similarly to Jackson Soloists and many of their other models.

Typically, a Charvel San Dimas will weigh around 10 to 11 lbs, and this amount of weight is also standard for Charvel’s other popular designs, like the So-Cal and the DK.

8. How Much Does An Ibanez RG Weigh?

When it comes to superstrat guitars, Ibanez RGs, alongside the JEMs, are some of the lighter electric guitars you can find on the market because of their slim bodies and necks.

You can usually find Ibanez RG and JEM guitars weighing about 7 to 8 lbs., which also contributes to their reputation for being very comfortable fast-playing guitars that you can find at several price points.

Like Ibanez, Paul Reed Smith guitars are also on the lighter side, and their Standard 22 and 24 models are also roughly 7 to 8 lbs, on average. The PRS SE Custom 22 and 24 guitars weigh pretty similarly to the Standards as well.

Overall, these are fantastic quality guitars that look great while keeping them lightweight! This, along with their comfortable necks and versatile sound, makes them popular amongst guitarists across all genres.

10. How Much Does A Gretsch Electromatic Guitar Weigh?

Like Les Pauls, Gretch Electromatic guitars are quite large and have the potential to weigh more than your average guitar.

These guitars, which are associated with early rock n’ roll, can get pretty heavy, and it’s not unusual to see them weigh 13 pounds or more. Even the lighter Electromatics can hover around 10lbs, too.

Based on these highly well-known guitars, it’s safe to say the average weight of an electric guitar is around 8 lbs or 3.6 kg. This weight is pretty modest and allows them to be comfortable and enjoyable for most guitarists.

However, if you got the chance to read all of these different examples, you’d also notice that there’s a typical range that weights can fall in, and it’s definitely normal to find guitars that are both heavier and lighter than this value, and some people might have a preference for one or the other.

For example, it’s evident, due to its use over the decades, that people really like the hardiness of the Les Paul, whereas someone who is recovering from an injury would benefit more from a lightweight guitar.

Whether you came for an answer regarding a specific guitar or you were just curious about different ones, I hope your questions have been answered regarding electric guitar weights. It’s an important aspect for a lot of players and a feature that adds to the diversity of electric guitars out there.