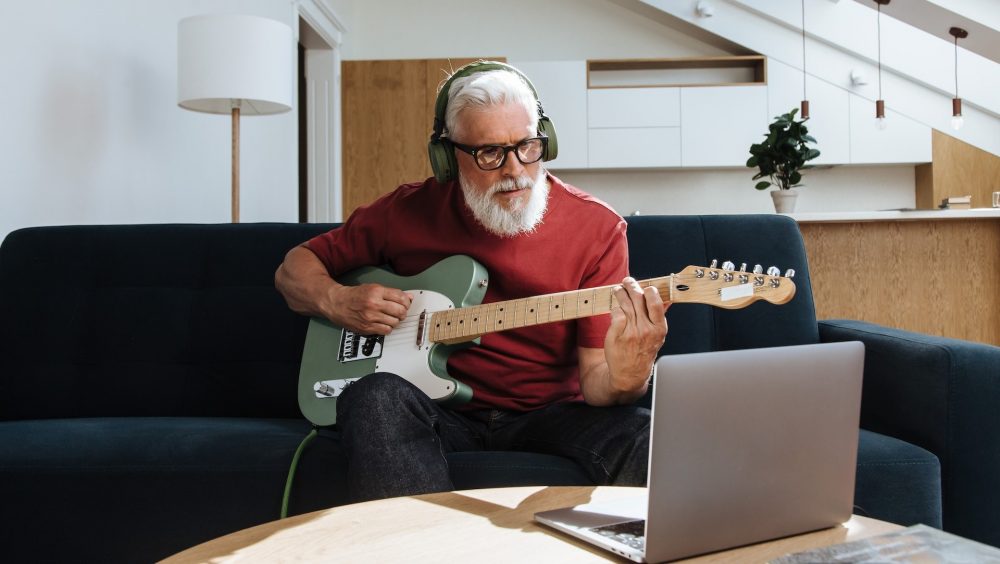 If you live in an apartment and you want to be able to learn to play the guitar, all hope is not lost if you happen to reside near a bunch of people. Not everyone has the luxury of having spacious homes, and many individuals share walls with others and are still able to get their practice in. However, you will need to adjust to your surroundings, and sometimes it can also mean making compromises.

Even if you’re a decent player already, here are some practical and effective tips that can help you out by letting you play your guitar without disturbing your family, roommates, and your neighbors in your apartment complex by keeping the noise to a bare minimum or non-existent.

It’s a sad truth, but it’s significantly harder to be able to practice acoustic guitar in an apartment than an electric guitar because of the noise levels that an acoustic instrument produces. Unlike an acoustic, there are ways to keep things extremely quiet with an electric guitar, which is what this guide is all about.

Sure, you can work on playing an acoustic softly, but at the same time, you’re learning some bad habits by forcing yourself into one dynamic range, which is not good for acoustic players.

You’ll want to be able to learn how to effectively produce volume, too, say, by strumming, but this simply isn’t feasible when living inside an apartment.

However, even if you do play as quietly as possible, there is still no guarantee that the sound won’t travel through the walls and the ceiling. Those low bass frequencies are especially notorious for poking their heads through them.

Instead, suppose you want to be able to play guitar as freely as possible. In that case, an electric guitar is 100% the way to go for apartment guitarists because there are a ton of accommodations for it that can let you practice anytime that you wish. As you continue to read, you’ll learn about some of the ways this is possible.

If you’re going to be practicing in an apartment, you’ll want to invest in some decent headphones and a cheap adapter that provides a ¼-inch connection if it doesn’t come with it already.

Alternatively, you can look into some wireless headphones if you have an amp that has Bluetooth support; there are plenty of wireless headsets that can connect through Bluetooth technology.

However, if you’re going wired, understanding if you need a quarter-inch connection is important because many amplifiers have a jack that requires this ¼-inch insert, as do audio interfaces, both of which will be discussed in this guide. The quarter-inch connection and jack is one you may already be familiar with as it’s the standard size for instrument cables.

There will be plenty of amps, however, that use the standard 6.3mm headphone jack, too, so regardless if you already have an amp that supports headphones or you’ve picked up some headphones first, you can simply check if you need an adapter or not or you can check out these comfortable headphones on Amazon that are able to give you both connections!

That being said, headphones are your best friend, and if you play electric guitar, it will keep the sound confined to your own head and ears, so you won’t need to worry about bothering anyone while you play.

If you live in an apartment, there’s no way you’re going to be able to play a tube amp without getting some noise complaints, and this is one of the downsides of using one of those.

Even at their lowest volumes, more often than not, these will simply be too loud for most apartment complexes.

Instead, you’ll want to get what is known as a solid-state amp, which is entirely digital and will give you a headphone jack to plug yours in. As mentioned before, some of these amplifiers will use a quarter-inch jack for their headphone out feature, but others will use the standard headphone jack size, which is 6.3mm, which is considerably smaller, so you’ll know pretty quickly what size you’ll need to be using.

Since you’ll be playing your solid state amp with headphones in it, you don’t need to worry too much about the number of watts it has. Instead, I’d recommend getting something that doesn’t take up much space in your apartment, such as a decent practice amp.

I actually have another guide specifically about these, and here, you can find some great affordable practice amps with headphone support that will let you play in peace.

Although having a little solid-state amp is convenient and handy, there is an alternative that could be very helpful for your situation, and that’s playing through your computer!

In order to do that, you’ll need an audio interface, an amp simulator in the form of a plugin, as well as a digital audio workstation (DAW), such as Reaper, to get these things up and running. Reaper is super affordable and beginner friendly, so I suggest looking into that if that’ll be your first experience using a DAW.

This process does have a learning curve to it, but it’s not terribly difficult to get started. Although it might seem a little more complicated than just obtaining an amplifier, this method does provide some valuable benefits, such as being able to jam along to backing tracks on YouTube while being able to hear your guitar at the same time through your headphones.

Of course, it also allows you to be able to record your guitar directly into your computer. This is one of the most significant perks of getting your guitar connected to it. There is also a lot of great and affordable amp sim software out there that sound just as realistic as a lot of the powerful tube amps that they can emulate.

If you’re interested in going with this route, I highly recommend the Focusrite Scarlett 2i2 because it’s about as affordable as a practice amp, pretty straightforward to use, and won’t take up much space at all. I personally use this one, and it’s highly regarded by countless others for its sound quality and ease of use. Plus, it looks pretty sleek and cool in my opinion:

By following these tips for playing guitar in an apartment, especially using headphones, you can pretty much ensure that you can practice at any hour of the day without having some angry neighbors knocking on your door telling you to pipe down or leaving you scathing notes with harsh messages. Dealing with this will only make you not want to practice as it can completely ruin a person’s learning experience.

Not only that, this advice can also apply if you live with family members or roommates who don’t appreciate a lot of noise and it’s still relevant if you’re living in a regular house or condo.

Thankfully, a lot of the skills and knowledge transfer over too, in case you do get the opportunity to play the acoustic guitar on your own terms someday in the future.

The only alternative is finding a more suitable practice space for acoustic guitar playing, but it is not only not very convenient, but it could also cost you.

Practice spaces you that can rent out, especially in urban areas, tend not to be cheap. On average, they usually cost around $20 an hour. That’s not worth it for your everyday guitar practice sessions, so you’ll want to do everything in your power to play guitar quietly in your apartment and use the tools you have available to you.

If you live in an apartment and you just want to be able to play the guitar, hopefully, this guide has given you an idea of the few things you should pick up. Having an electric guitar, a pair of headphones, a small solid-state amp, or a means of playing through your computer is all you really need to keep the noise down and get countless hours of practice time in without driving anybody around you crazy.