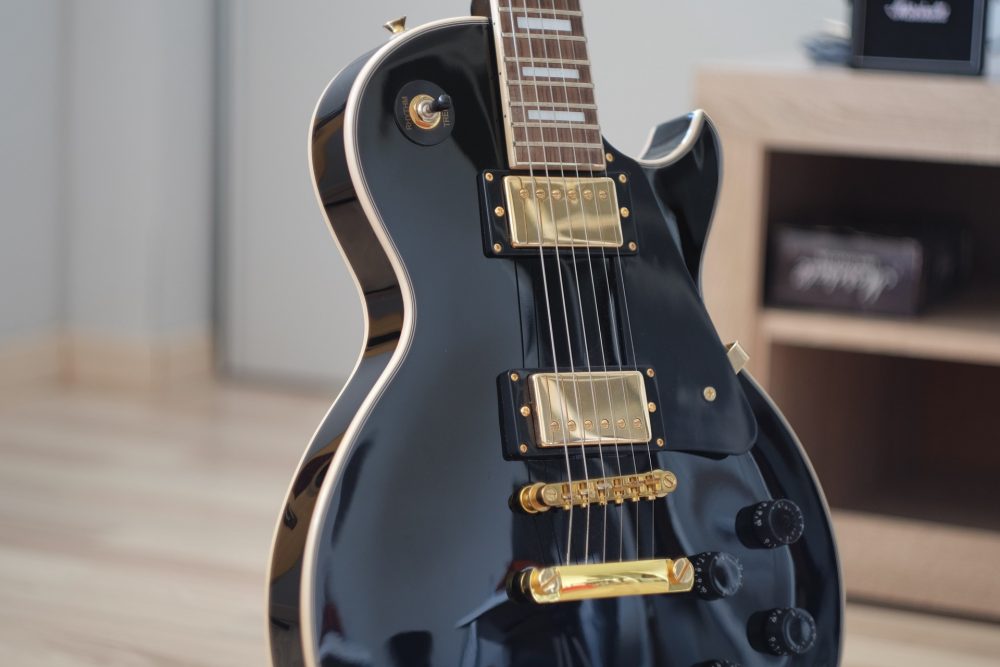 If you’ve come across a Gibson Les Paul online or in a store and you’ve been shocked by its price tag, you’re not alone. Luckily, you can still find the best Les Paul that matches your budget, as there there are cheaper ways to come close to getting that classic look, feel, and sound and not break the bank. Whether you’re a beginner who is inspired by the appearance of these guitars or you’ve been playing for a while and are in the market for something at a fraction of the cost of the original, this article will share some of the best affordable Les Paul guitars at different pricing points for you to explore.

Donner is a brand that is known for making guitars and accessories that are quite cheap but not necessarily cheaply made. This reputation also applies to this DLP-124 guitar, which I find perfect for beginners.

It is well-constructed, has a comfortable neck profile, and steel tuning pegs to help keep your guitar in tune. However, many cheap guitars have poor tuning pegs on them, and the lack of tuning stability leads to frustration and sometimes causes new players to quit.

In my experience, the DLP’s are pretty reliable in this regard, but you can also swap them out if you don’t like them. Quality control could be iffy on these lower-end guitars, so if you find your pegs too loose, it’s a pretty easy fix.

Overall, I’d say that they’re more than what you’d expect for a guitar that’s under $200, and I was quite surprised at how decent it was.

However, with this money, you’re not only getting a guitar but a package deal instead, and this is one of the main reasons I’d recommend this as an entry-level guitarist who loves Les Pauls.

It comes with a gigbag, a cable, and a strap to help you get started, but you’ll have to grab an amp if you don’t have one already. With that in mind, if you’re still looking for something of a bit better quality, then look no further than the next sections up ahead.

It’s no Gibson, but this beautiful-looking guitar provides a lot of value at this price point – at around $200, there are quite a few good things to say about this Les Paul copy.

First things first, while this guitar doesn’t come in any other colors, they really did this one color they do offer justice. I am a huge fan of the emerald green finish, and with the flamed top, it looks more expensive than it actually is.

For being so low-cost, the construction is quite decent, and the neck is pretty thin compared to other Les Paul clones out there. Some people prefer a thicker neck, but for others, it might be a feature they dislike about real Les Paul, so having something more comfortable is always a good thing, especially for beginners.

The pickups on this guitar aren’t anything to write home about, but these are something that can be swapped out, just like the tuners, if you believe they can use an upgrade.

Be sure to check out my guide on how to choose new guitar pickups to learn more about them.

Although it doesn’t come with all of the goodies like the Donner in the previous section, I think that new players and experienced ones alike will be pleasantly surprised by the IYV ILS-300, and if you have a strict and limited budget to work with and want something that looks nice and plays well, this is a great option to go with.

Epiphone is the leader of affordable Les Pauls, and since they’re part of the Gibson brand, they’re not actually copies, but rather, they are produced as budget-line models of the Gibsons to make them more accessible to the masses.

Epiphone Les Pauls can come at varying prices too, but the one we’re taking a look at here is the Studio LT, which is a model that shares the classic design and many of the colors as those early Gibsons that everyone reveres.

Like a lot of the Gibson Les Pauls, these Epiphones consist of both a mahogany body and neck with a Tune-o-Matic bridge and two humbuckers that help you get that big classic rock sound.

The die-cast tuners are also quite solid and will help you stay in tune for longer, and you probably won’t ever need to replace these.

I personally like the appearance of the zebra humbuckers, but if you want it to look more like your traditional Les Pauls, you can always look into getting some gold or chrome pickup covers. Those always look classy and timeless.

For an electric guitar under $500, you can’t go wrong with the Epiphone Les Paul Studio LT, it is one of the top ones at this price range, but if you’re planning to invest a bit more into something a bit better, Epiphone does offer models that are more higher-end, such as the Les Paul Standard 50s and 60s that are still reasonably priced and look and sound even closer to the original Gibsons.

If you’d ask my take on what the best Les Paul copies are, hands down, I’d go with the Eclipse line from ESP. However, those can cost an arm and a leg, but fortunately, ESP’s cheaper production line, LTD, offers us the EC series, which is a pretty diverse group, so here, I will focus on the EC-256 specifically.

The LTD EC-256 is a mid-priced electric guitar that typically runs just under $600 with most retailers, but what I like about it other than being an excellent bang-for-your-buck instrument, is that it provides the perfect blend of that modern and classic look, and there are a variety of colors to help you get the exact style that you’re going for and can come in a satin finish or a flamed maple top.

These guitars are a pleasure to play and sound great – the neck profile on this guitar is thinner than your ordinary Les Paul guitar and should be very comfortable for someone who likes something not as fat as a Les Paul but still want that iconic design.

Nonetheless, with mahogany tonewoods and the ESP-designed pickups, you’ll have a very versatile instrument for rock and metal, but these are great for other genres too. You’ll have no issues finding a tone that works for pop, blues, and jazz with any Les Paul.

While it doesn’t affect its sound and playability, the binding around the body and neck of the guitar is a very nice touch and something that you don’t typically see on lower-priced guitars and helps set it apart from them. Check them out – they’re absolutely gorgeous!

Although they’ve pioneered many popular designs, like the Dinky, Rhoads V, and the Kelly, Jackson isn’t exactly known for their Les Paul-style guitars, but if you’re looking for something with more edge, the Monarkh is the way to go.

Body-wise, it mostly looks like your standard Les Paul shape, but as you start to look around, you’ll realize this isn’t your typical Les Paul copy, and it starts to add that Jackson character to it with the sharkfin inlays and the pointed headstock.

On these SC models, in particular, you’ll also notice that there are some improvements regarding the types of wood used as well as the electronics compared to cheaper Monarkh models and the other Les Paul-style guitars in this article.

Instead of using a rosewood alternative like a lot of entry-level guitars, the fingerboard is made out of ebony, which is known for being smooth and bright like maple, while still having that darker look that people like about rosewood and its substitutes.

The neck-through construction, along with the binding, looks great, and the radius helps this guitar play like butter, which is pretty standard from a good Jackson guitar. They are made for fast-playing, which isn’t something I can say about actual Gibson Les Pauls and their beefy necks.

As mentioned before, the electronics are of higher quality in that they use Seymour Duncan pickups, and they sound excellent, but if you decide to go with one of the cheaper guitars suggested, you can always upgrade your pickups when it fits your budget. This guitar usually runs for under $1000 through a lot of retailers, but if the price is still a bit steep, it still helps to know you can make modifications if you need them if you choose a lower-cost version.

Obviously, these aren’t the only Les Paul models out there, but if I only had to pick a handful for a limited price range, these are the best ones that’d I recommend. However, if you have loyalty to a specific brand, keep in mind there are cheaper and more expensive versions of these models out there that you can look into. With that in consideration, I hope that these will lead you in the right direction, or even better, you’ve found one of these great guitars to be the one for you and will be a part of your guitar-playing journey for years to come.

Additionally, you should check out my guide to the best affordable Stratocasters, if this is also a design that you like.  Both the Les Paul and the Stratocaster are classic and timeless, and either one will serve you well for pretty much any genre of music.