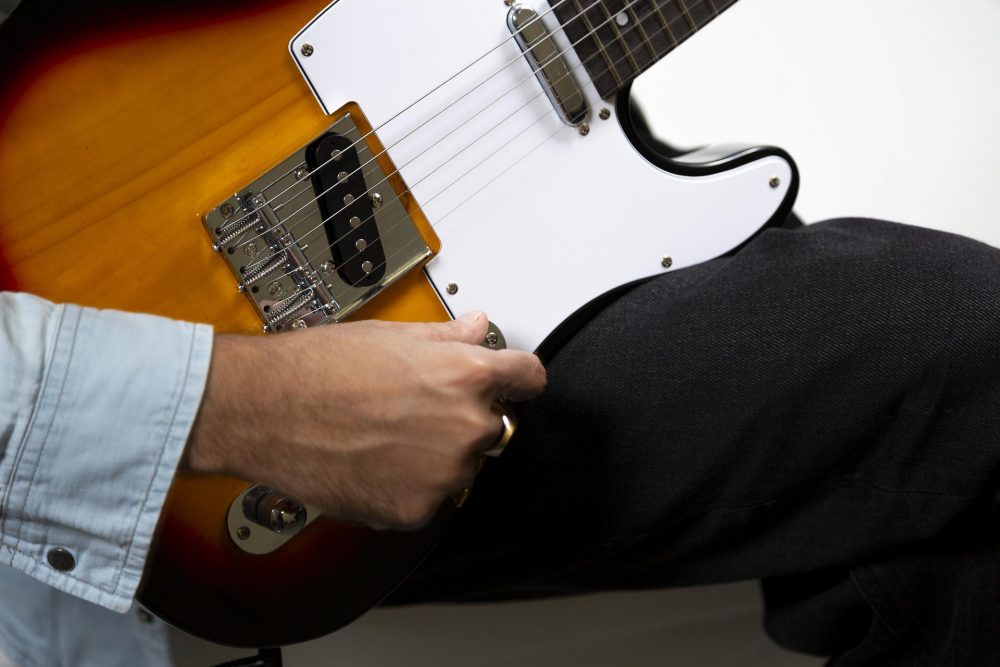 The decision to play guitar sitting down vs. standing up has been something that many guitarists have debated for quite some time now. Some players feel more comfortable playing while seated, while others prefer to stand. Of course, both approaches have some pros and cons, and the best way to play is ultimately up to the individual player and their needs. That being said, let’s go over each way of playing!

Sitting down when playing guitar has a few advantages. For one, it can be more comfortable for long practice sessions or gigs. Players who suffer from back pain may find that sitting alleviates some of the strain. Additionally, sitting gives players a better view of the fretboard, which can be helpful when learning new songs or techniques.

However, although playing while sitting can be comfortable, it can also reinforce bad posture if you’re not being mindful of it. It can be easy to start slouching or hunching over too much if you don’t pay attention, but as long as you’re aware of this, there aren’t really any more downsides to it.

Truthfully, most people will probably spend the majority of their time practicing while sitting down, but learning to play standing up has its time and place too, which you will learn about next.

Like sitting, playing guitar standing up can also have its benefits. Many players feel that they have more freedom of movement when standing, which can help them play with more expression and work on their stage presence.

Additionally, playing standing up can help build up stamina and endurance, as players have to support the weight of the instrument for extended periods of time. At the same time, it can be more tiring than if you were to play guitar sitting down. A good guitar strap can definitely provide relief for this, though.

Depending on what kind of guitar you play, you’ll probably want to practice standing up if you plan on playing guitar for a live audience. For example, if you mainly play electric guitar for a band, getting used to standing and playing is something you should get used to before you start playing gigs since it does feel noticeably different. Classical guitarists, on the other hand, always play while sitting down, even while performing live, and never have to practice standing and playing.

Ultimately, deciding whether to play guitar standing vs. sitting is entirely personal. Some players may be equally comfortable in both positions, while others may prefer one. There is no right or wrong answer – it’s all about what works best for you and the type of guitar you play.

For example, If you play an electric guitar – why not try both ways of playing? If you prefer to sit, dedicate a little time each day to practice standing, especially if you want to play with a band someday. Of course, you can spend most of your time sitting if you prefer, but making some time to adapt to standing up can make a huge difference!

You can play however you wish, but keep your goals and aspirations in mind since the way you spend time practicing the guitar will be how you reach them.