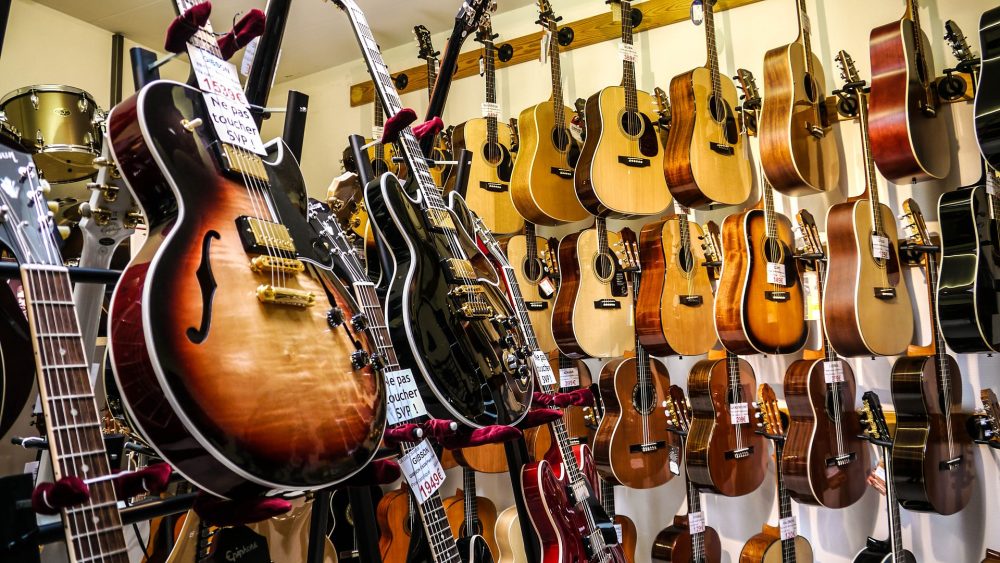 Choosing between an acoustic vs. electric guitar is a very common concern that many new players have, and understandably so. Beginners are looking for the right instrument to help them get started and provide the most enjoyment while they learn how to play the guitar. This article will discuss the pros and cons of electric and acoustic guitars so that you can have an easier time finding an instrument that suits you.

Is Electric Guitar Easier Than Acoustic?

Without a doubt, electric guitars are easier and more comfortable to play for most beginners; they have more compact body shapes, thinner necks, and weigh less overall. Also, the string gauges on electric guitars tend to be lighter with less tension, and the string height (action) on the fingerboard is usually lower.

All of these factors help enhance the playability of electric guitars!

However, regardless of which one you choose, you will have a phase where your fingers will need to develop calluses, and this merely happens just by playing. However, the electric guitar could minimize discomfort while you learn and get used to the strings compared to the thicker strings on an acoustic.

On the other hand, many would argue that the robust acoustic guitar neck and tough strings and tension are ideal for beginners to strengthen their hands. Because of this, someone who learns on an acoustic first often has an easier time playing an electric guitar, but not vice-versa.

This experience is sometimes compared to someone who learns how to drive stick-shift first but tries a car with an automatic transmission – an individual who only drives automatic vehicles will be totally lost on how to operate a manual one.

For guitar, though, I find it to be significantly less extreme than this situation since acoustic and electric guitars are not entirely different instruments. In reality, aside from the feel and sound of them, they’re fundamentally the same.

With that considered, even though the electric guitar is overall physically easier to play, there are some aspects where the acoustic guitar is advantageous. The next section will cover some more of them so you can keep them in mind as you go about choosing a guitar.

What Are Some Reasons To Play Acoustic Guitar?

Although a lot of beginners will have an easier time adjusting to electric guitars, acoustic guitars are by no means difficult or cumbersome to play.

The truth is that it’s more common for beginners to start with acoustics than electric guitars.

No matter if they’re using steel-string or classical guitars, millions of new players start out with acoustic guitars all of the time, often at very young ages.

It’s also worth noting that plenty of acoustic guitars is scaled down to help beginners with smaller hands learn the instrument more comfortably.

Still, the necks on these guitars will always be wider than electrics – but there are some pros to this!

The strings will be spaced out further apart on an acoustic guitar, making chord fingerings significantly more accessible than on an electric guitar. In general, I think many beginners will be a lot more accurate when hitting notes on an acoustic because their fingers won’t be as bunched up.

Another thing that many people find beneficial about acoustic guitars is that it doesn’t require an amplifier to sound good – that’s what the soundhole is designed to do.

Sure, you can play electric guitar without an amp, but it doesn’t sound nearly as pleasant.

Besides, for many beginners, a lot of the inspiration to play an electric guitar comes from an amp’s sounds. I remember when I got my first electric guitar and loved cranking up the distortion on mine, even though it probably sounded terrible, in retrospect.

That being said, the ability to pick up an acoustic and produce beautiful sounds right away is a huge perk for beginners starting out on this instrument, and it’s hard to beat this convenience and simplicity.

Electric vs. Acoustic: Which One Is Better?

As you can see, each of these instruments has its benefits and drawbacks, and the only way to decide which one is truly better is to think about what makes you interested in playing in the first place.

Are you into, say, blues, jazz, rock, or heavy metal guitar players? Then you’d probably enjoy getting an electric guitar and an amp and getting started with those.

On the other hand, maybe you like music that revolves around strumming chords and fingerpicking. If this sounds like you, you’ll most likely benefit the most by getting an acoustic guitar.

Even then, you can break this down further. For example, if you want to learn classical guitar music, a nylon-string acoustic guitar is the way to go, whereas a steel-string one is more versatile and can be used for a ton of different music.

It’s important to realize that the skills you learn on your first guitar can carry over if you decide to try a different one later.

The fretboard and its notes are all laid out the same way, so you’ll be able to apply your scales and chords on any guitar you pick up. The way you hold a pick shouldn’t change either.

The main takeaway here is that acoustic and electric guitars feel and sound different, but you can learn on any of them and become a great player since there are a lot of resources available that cater to each style of guitar playing.

The odds are, you’ll end up having both types of guitars anyway!

The decision for beginners to learn on an acoustic or an electric guitar should mainly be driven by what inspires them to play. However, I hope that some of these pros and cons were still insightful and will help you make an informed decision on what you should start with soon.

At the same time, if you have a loved one interested in learning the guitar for the first time, try to see what kind of music they’re interested in playing, or better yet, see if they have a particular type of guitar in mind. This tip is especially beneficial if you’re looking to purchase a guitar as a gift for someone.

All-in-all, no matter which one someone starts with, you can become proficient at both of them simultaneously with regular practice and developing your skills. Maybe one day, you’ll have both an electric and acoustic guitar and take advantage of the different qualities they have to offer.