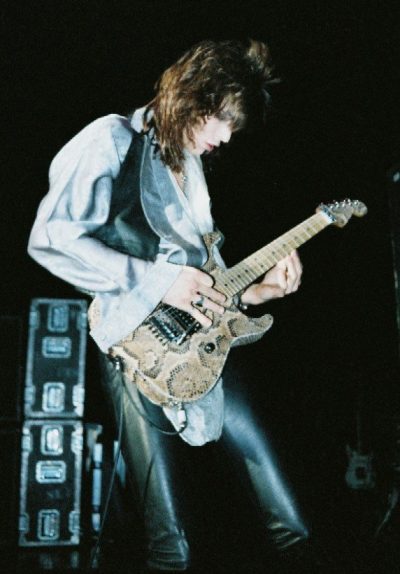 The 1980s was a pivotal decade for guitar playing, and many of the flashiest, technical, and most influential guitarists have come from this amazing era of heavy metal history. A ton of the top shredders from the 80s still rank high in the lists and are talked about frequently; however, many just don’t get as much appreciation as they deserve either. This article will cover some of the most unsung guitar heroes of those golden years who are, nowadays, overlooked despite their offerings to metal and instrumental guitar playing as a whole.

The name Wolf Hoffmann might not ring a bell to a lot of people, but there is a good chance you’ve heard of the German metal band Accept, which is a group that is best known for tracks like “Balls to the Wall” and “Fast As a Shark.”

Accept have been around forever, and Hoffmann’s guitar playing has been the most important part of their straightforward brand of heavy metal.

Even iconic vocalist Udo Dirkschneider has been replaced by Mark Tornillo, who is equally as competent and just as convincing, so that’s just a testament to Wolf Hoffman and his skills.

To complement their bone-crushing riffs, Hoffmann’s solos are blisteringly fast and melodic, and if you haven’t checked out his legendary band Accept, here are some of his best ones:

Akira Takasaki might be unfamiliar to a lot of newer players these days partly due to his country of origin, but he is the guitarist of the band Loudness, who is the first Japanese metal act to break through in the West.

Throughout the mid-80s to the early 90s, Loudness had a good run in the United States, and Takasaki was noted for his style of guitar playing, which I’d describe as a cross between Eddie Van Halen and Paul Gilbert due to his use of tapping and very fast alternate-picked runs.

Many folks from the older generation might remember Akira Takasaki, but nowadays, he doesn’t get too much attention outside of Japan. Here is his, in my opinion, his best solo, from one of Loudness’s most well-known tracks

A fellow countryman of Akira Takasaki is another heavy metal guitarist by the name of Hiroya Fukuda from the Japanese band, Anthem.

Anthem is one of my most favorite bands of all time, and as a whole, they are super underappreciated and never got much exposure in the West, aside from some American shows with Racer-X in the 80s, and more recently, in Europe.

This band has always had great guitar work and catchy tunes, and Fukuda was a part of the entire 80s run bringing some of the most engaging riffs and solos I’ve ever heard but would be replaced by Hideaki Nakama and Akio Shimizu in the 1990s. However, these two are also both fantastic players and relatively unknown outside of Japan that are also totally worth listening to.

There are plenty of thrash metal bands that have had well-regarded guitarists, but one that doesn’t get as much talk as others is Jeff Waters from the band Annihilator.

A little fact that a lot of people don’t know is that Jeff Waters was actually offered an audition for Megadeth in 1989, but that job went to Marty Friedman, and the rest was history from there.

If he got the gig instead, it’d be a different story, and we wouldn’t be able to enjoy Friedman’s guitar performances on critically-acclaimed Megadeth records like Rust in Peace and Countdown to Extinction.

Nonetheless, despite Jeff Waters not joining Megadeth, the metal word is grateful for his contributions to thrash, especially Annihilator’s album Alice in Hell, which debuted in 1989 as well.

If you like super-fast neoclassical shredding by guys like Michael Angelo Batio and Yngwie Malmsteen, Chris Impellitteri should be right up your alley. However, unfortunately, this incredible guitarist has been compared to and overshadowed by players like these, especially Yngwie.

It’s also interesting to note that despite being American, Impellitteri was, and still is, significantly more popular in Japan than he ever was back at home, which is rather unusual.

That being said, Chris Impellitteri is one of the fastest guitarists in the world and is the leader of his band, appropriately called Impellitteri, and also plays in Animetal USA. I especially believe that his first album with his solo band, Stand in Line, is a true hidden gem in regards to heavy metal that’s centered around virtuosic guitar playing.

It also features legendary singer Graham Bonnet on it, who brings even more power and life to the tracks. Check out this live performance of“Tonight I Fly” by Impelliterri here:

The band King Diamond is mainly known for their eccentric singer of the same name, but in my opinion, the truly best part of King Diamond’s band is the amazing guitar playing by Andy LaRocque, who also co-writes a lot of the songs in the band still to this day.

Outside of King Diamond, he has also played on Death’s Individual Thought Patterns and recorded guest solos for a handful of bands, including At The Gates.

For me, LaRocque’s solos have always hit the spot as his style is a perfect blend of melody, speed, articulation, through the use of interesting guitar scales and arpeggios, while having an incredible vibrato to top it off.

Below are some of his best solos ever that you must listen to – you won’t regret it!

Mike Varney and his record label Shrapnel Records was the first organization to really focus on putting out albums that were catered to guitar virtuosos and instrumental guitar music, in general.

For example, they kickstarted the careers of Yngwie Malmsteen, Jason Becker, Marty Friedman, and Paul Gilbert, to name a few. However, one guitarist who also got his start on Shrapnel, who I find extremely underrated compared to some of his peers here, is Tony Macalpine.

This is because Tony has all of the chops in the world, but he is also incredibly soulful with his playing as well and has a jazz fusion vibe at times.

It’s also worth noting that he is also an equally accomplished pianist and keyboardist, so he definitely knows his music theory!

Check out the beautiful track “Tears of Sahara” to listen to some of the most beautiful and tasteful shredding that you’ll ever hear:

Another phenomenal guitarist from the Shrapnel days who I think is criminally underrated is Vinnie Moore, who stands out with his fast and technical neoclassical lines and arpeggio sequences.

Like Macalpine, he also has a wonderful sense of melody that can get stuck in your head, and that’s something that helps give them their identity.

In fact, Vinnie and Tony have collaborated on numerous occasions, which makes sense considering they were labelmates for a number of years.

Here is my favorite track “Daydream” from Moore’s debut album Mind’s Eye, which showcases not only his incredible playing but also features Tony Macalpine on keyboards, who can shred just as hard on that instrument, similar to Jens Johansson.

Despite glam metal being so popular in the 1980s, a band that can fall into this genre that frequently goes underlooked is TNT, which is a Norwegian band that had an American singer named Tony Harnell.

Sure, TNT had some cheesy hits and probably saw most of their success in Japan, but they also had plenty of killer tracks as well. No matter what, those who heard the band immediately recognized how talented their guitarist and leader Ronni Le Tekro is.

Le Tekro has a distinct style that incorporates what he calls “machine gun picking,” which you can get a taste of in the solo of “Caught Between The Tigers.”

Speaking of glam metal, which is a genre that tends to be put down because of all of its “excess,” one of the greatest guitarists of all time from this time period is Warren DeMartini from Ratt.

Out of all of the bands who were doing the same thing at the time, like Motley Crue, Poison, and Def Leppard, Ratt has always stood out above the rest because of Warren’s guitar playing. Dokken was also really great, too, due to George Lynch’s work, who I consider properly rated, by the way.

Guitarists like Warren DeMartini made me want to pick up a Charvel guitar for myself, and while his songs still get played on the radio very frequently, he isn’t praised enough for being one of the best guitarists who truly shined in a genre that isn’t always respected. He’s a true guitar hero in my book.

If you’re into fast guitar playing, hopefully, this article has helped bring some attention to some players in this sphere that might not be as talked about as some of the more popular shredders. Who knows, perhaps you already know a few of these guys and agree with their place within the most underrated guitar virtuosos from the 80s.

Either way, most of them are still rocking out in their main bands or side-projects, so if you found some artists you enjoyed here, be sure to show your appreciation by checking out their discographies when you can.

Without these guitarists, instrumental guitar shred would surely be less diverse and enjoyable to listen to, even back then, and even those younger modern guitarists who are leading the way these days owe a lot to many of the players in this list for their contributions to guitar-orientated music.

If you feel inspired by guitarists like these ones and you want a new axe to help take you to the next level, check out my guide to the best superstrats you can get for under $1,000. Superstrats have been a popular guitar style for decades for shredders for several reasons, and in that article, you can learn why it’s the preferred guitar of choice by many of the top guitarists.