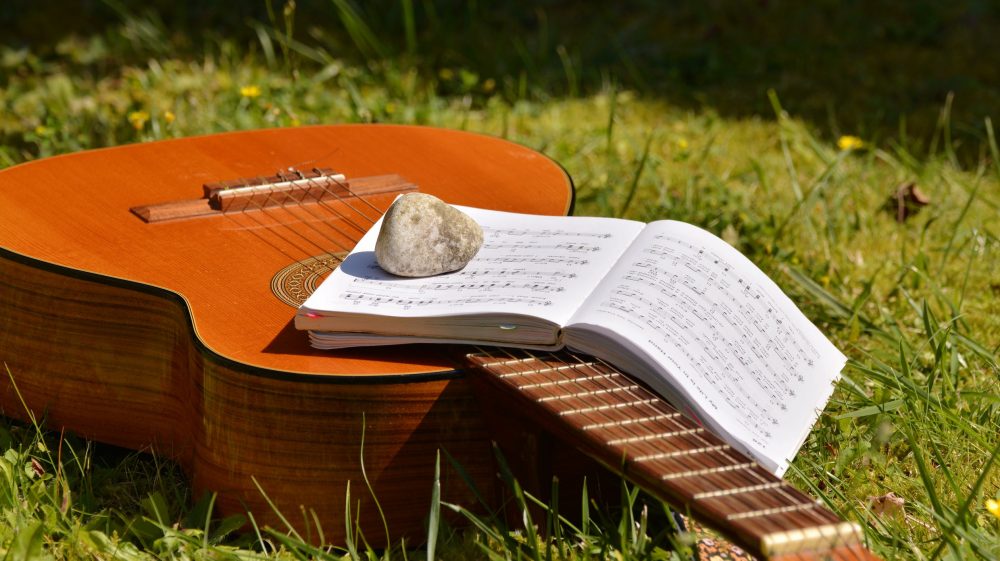 Let’s set the record straight – music theory concepts are universal between all Western instruments. Chords, scales, intervals, and more can be applied anywhere, but if you’re a guitarist, you’re probably going to want something that is catered to your instrument. The best guitar books for theory will always teach you what you need to know but also show you how these concepts are specifically applied to the fretboard.

This section is a quick preview of what’s to come in this article. These are some of the guitar books I recommend to anyone looking to get into music theory. While I highly recommend beginners to start learning theory early on, it’s never too late for advanced players.

People can learn how to play guitar without theory and still become professionals at their craft. However, I think that music theory can only help you, and it’s never too late to jump on that train.

These are the most effective music theory books for guitarists that are suitable for any skill level:

The rest of this piece will be dedicated to discussing each of these guitar books for music theory and explain why any of them will be a helpful asset to you.

It should also be noted that none of the books will require you to read music, but the musical staff is there if you want to practice it. In addition, each example will include tablature with rhythmic notation, allowing new players to jump in and follow along easier without having to read pitches on a staff.

After all, music theory is the primary focus of these publications, not sight-reading!

With that said, let’s dive into the three best guitar theory books that I know you’ll love.

The Hal Leonard Corporation is well-known for publishing many different music books, especially ones designed to show complete beginners how to play guitar.

They have had a good reputation for decades in helping people get started on their guitar journey, and despite having several different authors for each type of book, they offer consistent quality.

Tom Kolb wrote this particular book on guitar theory, and while this wasn’t my first on this subject or even Hal Leonard resource, I’ve read through this one and felt that this one is a must-have for players of all skill levels because of the author’s ability to explain the concepts clearly and concisely.

When I first started learning about music theory, the book I checked out was very convoluted, and it wasn’t designed for guitarists. It was more of a generic music theory textbook for all instruments, so I didn’t get any of the fretboard examples like you would in this one.

I think the combination of readability and having relevant examples are crucial for allowing music theory newbies to grasp these new ideas.

Essentially, because it’s common for people to be intimidated by music theory at first, you want a resource that teaches you the fundamentals you need to know, like scales and harmony, without being overbearing or too confusing to follow along with while you practice.

On top of that, the best guitar books for theory will always include audio examples, and this one does. Instead of a CD, Hal Leonard uploads their illustrations online so you can follow along with your book anywhere you go, without the need to pop in a disk.

This publication has a lot of similarities to the previous one, aside from a few things. I think this is an excellent music theory book for beginners, but it can also be helpful for intermediate and advanced guitar players.

This is because this book on theory touches upon a lot of the same rudimentary content that the Hal Leonard book does; however, it expands on particular topics even further.

The primary example I can think of is that while they both teach you how to construct chords, especially triads, The Guitarist’s Music Theory Book by Peter Vogl builds on these by explaining more complex harmonies and how to apply them.

Learning about diminished, augmented, and suspended chords and how to build chords from the harmonic minor scale may not be too relevant to a beginner student of music theory, but for a more seasoned guitar player who would like to develop their understanding of harmony even further would benefit from this content more.

Having knowledge of this is especially crucial if you are interested in exploring jazz theory one day.

Like the previous book, this one also includes online audio examples to assist you with learning, plus an ear training section to help develop your listening skills.

If you are a real go-getter and plan to take music theory seriously and learn beyond the very basics, I highly recommend this one.

3. The Practical Guide To Modern Music Theory For Guitarists by Joseph Alexander

The Practical Guide To Modern Music Theory For Guitarists has everything that you’d expect for one of the best guitar theory books, so what separates it from the rest?

Not very much, but it’s one that I strongly suggest because of the author’s communication style. As mentioned before, I felt that this is extremely important when learning music theory from scratch.

I also appreciate Joseph Alexander’s approach to his book. For example, he explains that people may know music theory but do not know how to communicate it or put it into practice.

The analogy he uses is that people know colors, but if someone asked you about the color “blue,” you wouldn’t know how to describe it unless you had it in your palette. The vocabulary and concepts of music theory are your palettes in this case.

With that in mind, he gives you solid methods that allow you to apply what you are learning practically and effectively.

This is especially useful for understanding the contexts of the major scale and its modes, particularly if you want to play them against a chord progression.

Lastly, Joseph Alexander makes himself quite accessible. He understands that you may not understand something right away, but if you continue to struggle, he allows you to email him, and he can try to explain things better for you.

I think this is pretty cool, and this is why Joseph Alexander and his publication stand out from all of the other music theory books for guitar out there.

You don’t need a ton of books on guitar theory to start learning the musical language. In reality, one or two will be enough in most cases!

The reason for this is that one author may be able to explain a specific concept better than another, so it’s nice to be able to refer to another resource if you find yourself getting stuck at any point.

On the other hand, if you get too many, you’ll most likely be paying for redundant information that gets covered in any book. You don’t want this, and it could potentially be a waste of money.

To recap, the best guitar books on music theory that I’ve checked out were:

Any of these three can take you very far when trying to learn how music theory works, and I think you will be doing an excellent service to your musical education by picking at least one of these.

They are put into layman’s terms and have excellent examples to reinforce what they say about each concept. As mentioned before in this article, the way the information is presented is crucial – it must be accessible to people wanting to learn the theory for the first time ever.

These factors are why I chose them as the top guitar theory books. These weren’t written for the seasoned music major in college in mind; they were meant for people who want an easy way to learn topics such as the major scale and how to build chords while also being able to apply what they’ve learned on the guitar specifically. You can also consider supplementing your theory knowledge by having supplemental resources, like guitar chord books so you can easily reference how a specific chord is made and how you can utilize it effectively.

Nonetheless, books like these are still fantastic for those interested in studying music in school one day!

For example, I wasn’t a music major in college, but I did enjoy taking music classes on the side for electives. Because I was familiar with music theory by reading books on the subject, taking music fundamentals and beginner harmony courses were incredibly easy.

It will be an easy A for you, too, if you take that route.

One of the most effective tools that all of these music theory books for guitar have is access to online resources. While reading will take up a good portion of your time, music is a listening skill and activity at its core.

Music has practically been around since the dawn of time, well not entirely, but it has existed for thousands of years, well before written records of it. These early musicians relied on aural skills to succeed at their craft.

By listening to the online examples and actively working on ear training, you’ll learn better because you will have more context to what things are supposed to sound like and how they can be used.

With YouTube, which is a powerful source of information, mind you, people underestimate the value of a good book these days. You don’t have to limit yourself to just one type of resource when there are quite a few avenues you can take simultaneously.

By reading the best guitar books on theory along with learning from my articles, videos, and a reputable in-person or online guitar teacher, you can take your understanding of music theory, and consequently, your guitar playing to the next level.