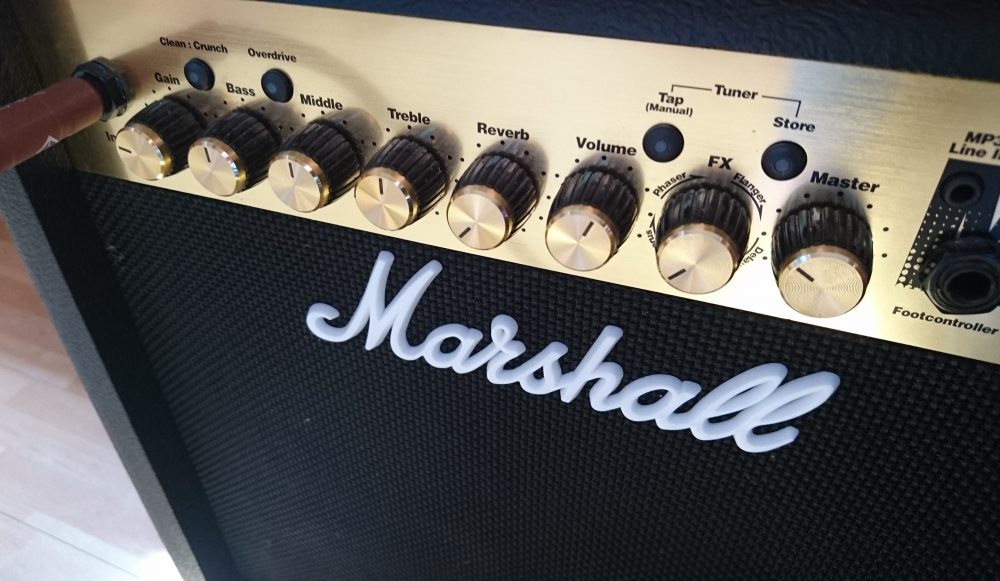 A combo is one of two types of amplifiers that a guitarist can choose from and is favored by players of all different skill levels. The other kind is known as a standalone, which is more commonly known as a “head.” In reality, this part is the actual amp, and it is attached to speakers, like with half or full stacks. Combos are nice because these parts are all in one unit, and they are convenient and typically the more cost-effective option. In this guide, I will recommend to you some of the best guitar combo amps under 500 dollars that will provide you with a lot of utility.

Which Combo Amp Is Best?

Just like guitars, there are a lot of different guitar amplifier brands and models and people will always have their preferences. In this section, I will show you some different combo amps that I think sound great and are relatively competitive with one another.

This means these amps will all be around the 300 to 400 dollar range and be in the 60 to 100W classes (with the exception of just one). These amplifiers are definitely a step up from the little practice ones:

There are similarities between all of these, but as you can see, they all have at least one area that I think they excel in the most and out-do the others. I will give my commentary on each of these combo amps under 500 bucks and go over their features to help you decide which one suits you best.

The Peavey Vyper VIP 3-100 is one of the most affordable amplifiers that I’ve selected to be on this list. At the time of writing this comprehensive guide, it is pretty much at a very close tie with the Spider V 60 (prices are subject to change with time, but you can probably always count on this one being reasonably-priced in relation to other amps in its class).

For being one of the cheapest ones in general, it has a lot in common with the other combo amplifiers here, particularly with the power, effects, and the ability to record. Here’s what you can expect from the Peavey Vyper VIP3:

Overall, this one is loud enough for gigs, has a lot of models and effects, and allows you to record guitar directly into your computer. To be honest, this isn’t very special, since nearly all of the ones in this article have these features, but at least you know you’re getting a complete package for your money. The important thing is that nothing major is really missing.

As for modeling amps, all forms of the Vyper (not just the VIP3-100 here) have been quite popular amongst beginners, intermediates, and even advanced players who need something that’s easy to practice with. If you’re on a stricter budget and need an amplifier that is very good across the board, this is one you should check out because the Peavey Vyper will be able to get the job done.

Just about every guitarist is familiar with Marshall amplifiers. Back in the day, it was quite common to see your favorite guitar heroes have a massive wall of Marshall stacks behind them. Whether they were all being used is a different story though! I’m pretty sure some were just up there just for decoration.

While it’s not nearly as big as a half stack, the Marshall Code 100W offers a big, powerful sound suitable for playing live. Here are some of its features:

The Marshall Code weighs about 50lbs, so it’s not as light-weight as some of the other ones, but it is definitely built like a tank. You want something durable if you’re going to be playing shows. With its 100 watts and 2 speakers, this can be a beast on stage, and it has that rich Marshall tone that the brand is legendary for. These are all reasons I chose this one as the best combo amp for gigs.

On top of that, you still have a lot of the customization that other amplifiers have to offer. USB connectivity has become the standard now, which facilitates recording and tone editing.

There are two primary reasons why I picked out the Line 6 Spider V 60-watt amp as the top choice for this category. The first explanation is that if recording guitars are your main priority, you don’t need something as big and powerful. However, 60 watts will still give you sufficient power to do other things as well like perform in a band.

The second reason is that Line 6 has a very good reputation for designing products that are intended for recording. Regarding amp simulation, they’ve really paved the way with their Pod, and nowadays their newer multi-effects and recording units are still amongst the best.

Here are some of the basic features that the Line 6 Spider V 60 has to offer:

Other than being a fantastic amp for recording, you’ve probably noticed that this is also a device that has a lot of useful practice tools. I think the metronome is a fine and unique addition to an amplifier and it should encourage new players to be aware of their own rhythm. Not only that, but the drum loops can also assist with this and give you something to jam along with.

It may not be the loudest one out of the bunch, but the Line 6 Spider V 60-watt amplifier has a lot of cool stuff that makes it one of the best guitar amps for under 500 dollars.

Sure, the Peavey Vyper and Line 6 Spider amplifiers have a ton of different effects on them, but I was excited when I first learned that Boss has finally ventured out into making guitar amps.

I’ve always liked Boss guitar effects pedals, so to learn that their amps might be able to replicate these sounds as decently as their multi-effects units can, I was very stoked. When I got the chance to play on of these, I was not disappointed one bit – the effects sound quite impressive! Here’s what you can get with the Katana:

The Katana might not have as many effects and presets as some amps under 500 dollars, but quantity doesn’t equal quality. Despite 55 still being a lot of effects if you think about it, you’re getting effects on an amplifier from a company that is the king of guitar effects. You are definitely in good hands.

Another feature I really thought was cool was their variable power option. You don’t need to blast the thing to get a full tone; with this option, you can dial it back, but your sound won’t be compromised, maintaining its shapeliness. I also like that this one is supportive of acoustic-electric guitars, a lot of amps are often one or the other.

Overall, it has a lot of standard features you can expect for combo amps, but the Boss-quality effects, are what really sets this one apart and it sounds great!

The combo amp world can get a little lonely at times for tube models. While they can emulate them pretty well these days, combo amps are dominated by solid-state technology. Up until this point, all of the ones in this guide have been solid-state. Things are about to change, and I haven’t forgotten about those who want an authentic tube tone from a guitar combo amp for under 500 dollars.

The Blackstar HT1R Series 100 has got your tube needs covered, and despite being the smallest and the most unique one in this guide, everyone knows that tubes are known for their booming sound regardless of size. Here are some of the specs from this great piece of gear:

On the surface, this one might seem underwhelming compared to the solid-state ones in this list, but don’t be fooled, this Blackstar is powerful for its size. You’ve read it right – it’s a 1-Watt amp with a 1 x 8 speaker, but because it is a tube, it can go head-to-head with the 100-watt ones from earlier. Additionally, the speaker output, which is 8 ohms, can support a 4 x 12 cabinet, if you needed to use a combo amp with a cab!

You may have also noticed the lack of models and effects, and this is to be expected with tube ones. Solid state technology is powered by computers and circuitry which allows all of those amps and effects to be loaded onto it. This just isn’t the case with tubes.

Instead, you get some of the fullest, warmest, and purest tone out of an amp in this price range, which I think is a fair compromise. The clean and overdrive channels give you a blank slate to work with, and your guitar pedals will be your palate. However, I think the overdrive is already beefy as it is and quite possibly one of the best combo amps for metal. Don’t underestimate this one- looks can be deceiving!

A good combo amp for guitar can be one of the most versatile pieces of equipment you can own. I’ll admit that a lot of these guitar combo amps for under 500 are alike, for instance, most of them have a huge selection of models and effects, enough power for live performances, and recording capabilities, but some of them shine more than others in specific categories.

In this guide, we went over 5 guitar combo amps that exceed others in certain areas, but in all likelihood, you’ll probably be very pleased with any of these:

In this group, I think the one that stands out the most is the Blackstar. While it’s true that I do have a soft spot for solid states, but I do enjoy a good tube amp and think the HT1R’s sound makes up for the lack of effects and other features compared to the others. Nonetheless, this amplifier is capable of anything – you can play live with it, record some tunes, and run all of your guitar pedals through it, which won’t go to waste due to onboard effects!

I hope that this article has been of substantial use to you, and helped you narrow down your search for a combo amp. Even though a half-stack or more would be cool, they aren’t always practical, and as mentioned before, a combo one can be an excellent asset to guitarists who are looking for a combination of power, portability, and affordability. Finding the best combo amp under 500 can be one your best purchases ever.

Before you leave, I also want to mention that if these are still out of your budget, or you’re looking for something even smaller and affordable, that’s suitable for a beginner or just for personal practice, I think you should give my guide to the best small practice amps a quick read. In that article, you’ll find many amps that are similar to these ones, but more bite-sized!