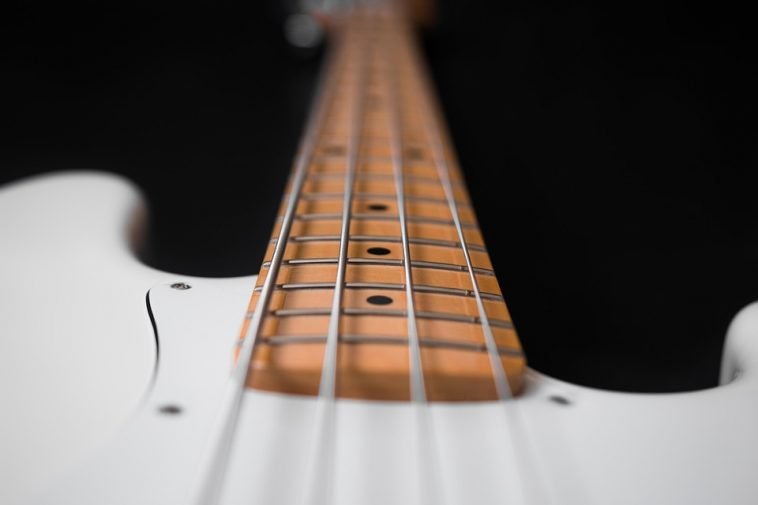 Learning how to read and play metal bass lines from the greats can help step up your playing by not only improving your technique but also giving you note-for-note transcriptions of many of your favorite tracks. In this article, I’ll share with you some of my favorite bass books for metal that can help you make learning more accessible and efficient, which are centered around some of the legends of the genre.

Iron Maiden was my first favorite heavy metal band ever, so naturally, they will be on this list. I think most people would agree that they rightfully belong here!

While Iron Maiden is known for their twin-guitar harmonies and very tasteful solos, and their galloping rhythms, some people mistakenly forget that Steve Harris is the bassist and mastermind behind most of Iron Maiden’s songs.

Steve Harris’ bass playing is essential for Maiden’s music, and his sound is quite iconic. Although a lot of his tone comes from his amp’s settings, technique, and his Fender P-basses, you can still learn how to play his material with any 4-string bass.

A lot of his songs are known to be very fast and driving, but there are also plenty of others that slow down the bass and groove very nicely. In this book, you get a total of 20 different songs that span across their entire career, and you get a nice selection of material to work with. There is something for beginners to start studying, but as you continue to improve there are more songs in there to keep you busy for a while – those fast gallops in songs like “Run To The Hills” and “The Evil That Men Do” will take practice and dedication to get precise and up to tempo!

Steve Harris is frequently cited as one of the most influential bassists in the genre, and Iron Maiden’s music will be timeless. Chances are, you already know their tunes, but are just looking for a good resource to start learning, and this book is a good place to take a look at Steve Harris’ way of writing bass lines that will pass the test of time.

Like Iron Maiden, Metallica is also legendary, and although I do enjoy Jason Newsted and Robert Trujillo’s work in the band, Cliff Burton is usually the one that is regarded as the most notable bassist in the band’s history.

Cliff Burton’s knowledge of music theory and powerful fingerstyle technique brought a lot to the table for Metallica and shaping their sound on those first few albums, which helped define thrash metal, effectively changing the landscape of the entire genre as a whole.

Unfortunately, Cliff’s life and his time in the band was cut short by a tragic bus accident in Sweden while touring through Europe. While I do appreciate the other’s contributions to the group, there’s always that curiosity of what Metallica would be like if Cliff was still around today.

Despite this, we can appreciate the great work that he did provide for us, and in this book, you get a taste of that. Compared to the Iron Maiden book, you only get 8 songs, but they’re definitely must-picks from albums that Cliff recorded on. The only exception is the track “One,” which is performed by Jason Newsted, who joined the band for the … And Justice For All album.

My only complaint is that it doesn’t include “Anesthesia (Pulling Teeth)” because that’s a track that inspired a lot of bassists to want to pick up the instrument in the first place. However, to be fair, it is also a bass solo that isn’t completely suitable for beginners (some parts are though!). Nonetheless, you still get a decent selection of accurate transcriptions of Metallica songs to help you start learning how to play metal bass, so you can be able to play these kinds of tracks in the future.

Aside from the mid-to-late 2000s, David Ellefson has been the bassist for Megadeth, and one of the main ways that he differs from Cliff Burton is that he uses a pick. Using a pick has a bad reputation amongst some bassists, but it doesn’t deserve the hate whatsoever. Using a pick offers a different kind of tone, and it can make playing certain lines more practical than using fingers, so it’s a very good idea to practice using one.

There’s no one better to start learning how to use a pick than to practice Ellefson’s lines, and in this book, you get 20 songs to work with, and there’s a variety of them from each of Megadeth’s classic albums. The songs also vary in difficulty as well, and beginners can learn of their easier riffs such as “Symphony of Destruction”, “In My Darkest Hour”, and “Peace Sells”, to name a few, but there’s also challenging stuff like “Wake Up Dead”, “Holy Wars”, and “Tornado of Souls”.

I can write an entire article about why you should take the time to learn how to use a pick (and I probably will soon!), but in this case, it’s not easy to achieve Megadeth’s bass tone with your fingers. Some parts might even seem downright impossible with fingers.

David Ellefson’s work has always been consistent, tight, and not to mention, very fun to play, and because of this, he easily one of my favorite bassists of all time. I think you’ll have a good time learning from this bass book and it has a lot to offer to someone wanting to learn metal.

One of the most highly regarded and frequently recommended bass books for metal is Extreme Metal Bass by Alex Webster, one of the most technically-proficient bassists in the entire genre, who is best known for his three-finger technique. This allows him to play those insanely fast passages that Cannibal Corpse is known for.

Unlike the previous bass books mentioned here, this one is specifically designed to help you build up your chops by providing you with various exercises to work with. The other books focused on actual songs, which can definitely help you develop your technique, but this is a more direct approach to it.

Therefore, while this isn’t centered around learning songs, there are still audio examples for you to follow along with, which will give you some musical context to apply what you are learning. Focusing specifically on technique is also a good habit to practice because it will allow you to build the skills that you need to play the harder songs that are out of your reach right now.

Another awesome aspect that this one has that other bass books for metal don’t is that it explains the music theory behind what you are doing, and Alex starts with the most basic stuff and works from there, making as easy as possible.

Many people are intimidated and get overwhelmed with things like music theory, and not only is Alex Webster one of the best metal bassists of all time, he is also an excellent teacher. He explains things very concisely, making things easy to follow along with. By having the musical knowledge and the chops to go with it, making your own bass lines will be easier than ever.

Having accurate transcriptions of songs can make learning them so much easier and time-efficient by taking out a lot of the guesswork that it takes by figuring out everything by ear.

This doesn’t mean that you should neglect to learn things by ear, though. Ear training is an extremely valuable skill to have, and I recommend that you still practice it often, because it will make you a better musician overall, not just a better bassist,

However, if you have the resources available to you, it makes sense to use them, and that’s where tab books for bass guitar come in. In fact, having transcriptions for any instrument is very useful, not just for the bass. It develops your ability to read tablature and sheet music, and for learning bass guitar, getting familiar with reading and understanding rhythmic notation is crucial.

I personally recommend that you dedicate learning songs from these bass tab books and also try to figure out your other favorite songs by ear. That way, no skill is being left out.

I found that there weren’t too many in-depth guides about this topic, and some snippets of information are available around the web, just not in one place. These are easily some of the best bass guitar books for metal, and I know that by practicing the material in them, you will not only see how great metal bass lines are made, but you’ll also be able to create and play your own by improving your technique through consistent practice.