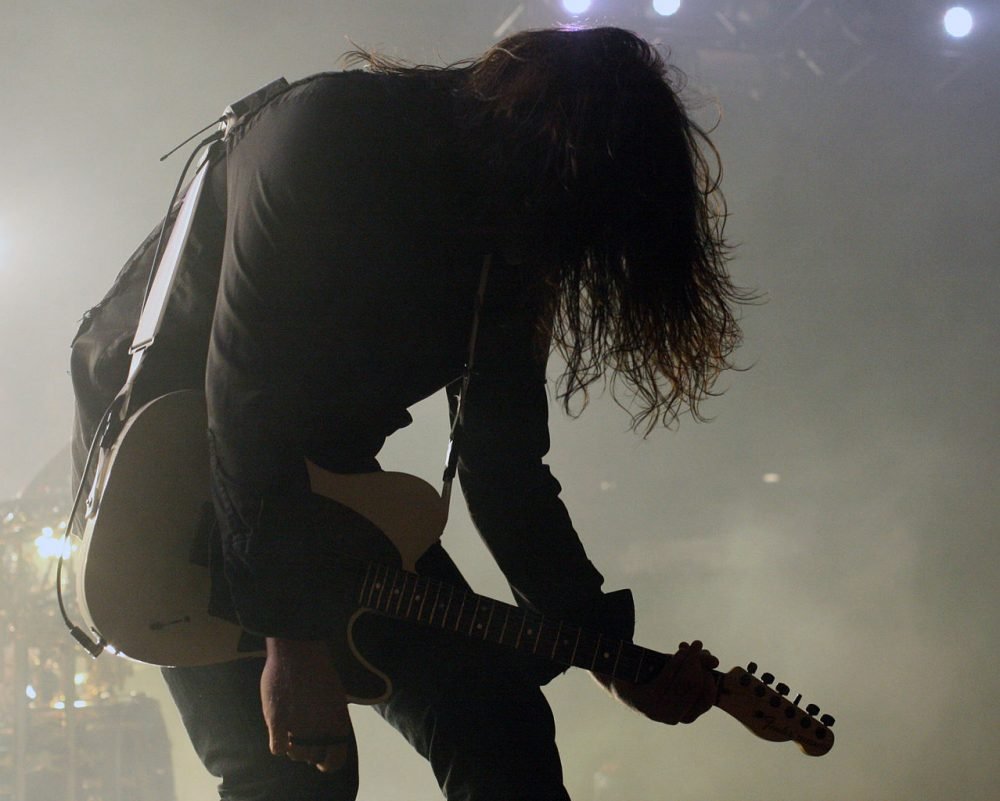 Telecasters can be metal machines, and while there have been a handful of notable guitarists who have used them, like John 5 and Jim Root, this type of guitar model is pretty underrated in the genre. This article will share some of the best telecaster and t-style guitars so you can take advantage of their classic look while having more power and a heavier tone that’s needed for metal music.

One of the most stunning telecaster guitars I’ve ever seen has been these Special Edition Telecasters that Fender has put out.

I haven’t seen too many Fenders out there that use a contoured flamed maple top, so this automatically stood out to me as soon as I saw it. The neck-binding and neck-through-body construction are also unique to these Fenders as well.

Speaking of the neck, this one has 22 jumbo frets, with abalone markers, on an Indian laurel fingerboard and uses a 15.75” radius, so it’s a bit on the flatter side across the neck compared to many other guitars.

However, it still uses that C-shaped neck profile seen on just about every Fender guitar, including the other ones in here, so it’s very comfortable, and you’ll have no problems bending and playing fast on these.

As for the pickups, this Fender Special Edition Custom Telecaster uses two humbucking pickups, which is a characteristic that you’ll also see on all of the best telecasters for metal here.

Humbuckers give you a beefier tone and help minimize the noise of traditional single-coil and telecaster pickups.

The two humbuckers that this guitar uses are the Pearly Gates in the bridge and a ‘59 in the neck. These are both by Seymour Duncan.

The Pearly Gates uses a vintage output rather than a high-output, but I think the EQ curve on it is great for metal; it’s higher on the treble and bass while pulling back on the mids.

Therefore, I think it sounds great, especially for hard rock and classic metal, and the ‘59 neck pickup complements it well. However, if you want a bridge pickup with higher output, you can swap the Pearly Gates for a JB, which would work seamlessly with the ‘59.

Overall, this is an excellent guitar for metal, but the guitar’s name almost makes me wonder if they’re only around for a limited amount of time. So, try to get your hands on one if you can!

Although they are imported, Fender Player series instruments are all fantastic instruments that stack up well to the American-made stuff that Fender is known for putting out for decades.

They’re significantly more affordable, and you get an extremely well-made, great-sounding instrument at a fraction of the price of the USA-made guitars.

The Fender Player Telecaster is no exception, and while it doesn’t look like your typical metal guitar, it sure plays like one, and it’s more than capable of sounding like one.

Like most traditional Fender guitars, these Player series have an alder body and a maple neck. You can pick one of these up in a few different colors, and this will also determine which fretboard wood it comes with – maple or Pau Ferro, a type of rosewood substitute.

The 22 frets and use a 9.5” radius is also relatively standard for Fenders, but this means that the neck is rounder than the Special Edition from the last section.

This radius probably makes it more comfortable to play chords on them for some people, but if you’ve seen people play a Fender, or you’ve tried them yourself, you know that you can easily shred on these too.

I think the Fender Player Series humbucking pickups sound good right out of the gate, but if you need something with a higher output and a specific EQ curve that you’re going for, you can always swap them out. I have another guide that recommends some excellent guitar pickups for metal here.

Even with that in mind, this telecaster is versatile and totally suitable for metal, especially if you have a good amp, but of course, you can customize it to your liking – it’s just nice to be able to have the option to try other things.

While the previous two Teles are excellent choices for metal guitar playing, I’d have to say the Fender Boxer Series Telecaster is one that was truly designed for players in this genre.

The Fender Boxer guitars have some unique history behind them – they were initially introduced in the 1980s and were created in Japan, similar to how Fender created the HM Strats, presumably to compete with the other superstrat guitars that were growing in popularity.

In recent years, Fender resurrected these guitars with great reception, and to keep it genuine, they’re still made in Japan, unlike many of their other production-line guitars.

That being said, Fender built these with shredders in mind – the body is made from basswood, a very lightweight tonewood, and is seen on many guitars designed for performance. Additionally, it uses a 22-fret rosewood fingerboard and 12” radius neck to facilitate super fast playing.

The Boxer Tele also has two high-output Boxer humbucking passive pickups with the option to coil-split if you want to get a single-coil tone when you need it.

A feature unique to these guitars is the TBX tone control, which is similar to regular tone pots in that they can cut out treble; however, they can also cut out bass.

I’m also a big advocate of the Gotoh tuners and the hardtail bridge that it comes equipped with; these can help give you reliable tuning stability.

Aesthetically, the Fender Boxer Series isn’t as intricate-looking as, say, the Fender Special Edition Custom Telecaster, but this guitar still manages to look slick and flashy while still keeping it simple. I especially like the black headstock that contrasts with the paint on the body.

Nonetheless, this guitar’s features are definitely ideal for people who want a high-performance telecaster for heavy metal guitar playing.

Perhaps one of the most well-known telecasters for metal is the signature model of Jim Root, who is one of the guitarists in the band Slipknot and formerly from Stone Sour.

First off, the Jim Root telecaster comes with EMG 81 and 60 active pickups. This is one of the most popular metal pickup pairs of all time and has been used by many notable players on countless records over the years because of the high output and tight and punchy tone that they give.

This is also augmented by the mahogany body, which gives this guitar a really thick and deep quality.

Similar to the Boxer telecaster, this guitar also has a 12” inch radius, but instead of rosewood, it has a beautiful ebony fretboard that adds a lot to the look and sound of this guitar.

The locking tuners are a super nice feature to have, and of course, I am a massive fan of the fixed bridge, but I think many people would love this guitar with a Floyd or any tremolo bar for that matter.

That being said, this is one of the most popular telecasters for this style of music, but if you’re looking for something with similar features that can offer you a tremolo option, the next guitar might be more up your alley.

Charvel makes some of the best superstrat guitars of all time, and this reputation extends to their So-Cal Style 2 models, which are hot-rodded telecasters.

Even though Fender has owned Charvel for about 20 years, there might be some debate on whether this is a true telecaster or a T-style guitar, but all I know is that the body and headstock are nearly identical to a Fender Telecaster and that this guitar is a beast in every way.

We’ve discussed fretboard radii numerous times for each of these guitars, and something that makes this guitar special from the other teles is that it uses a 12”-16” compound radius. This variance means that it’s rounder towards the nut and wider when you get near the guitar’s heel.

The compound radius is a feature frequently associated with Charvel and Jackson guitars, and it helps with playing chords at the lower frets and shredding and bending at the higher frets.

Next, another thing that I find remarkable about the So-Cal Style 2s lately is that they’ve started including Fishman Fluence Open Core active pickups in them, which are multi-voiced and have a lot of passive pickup qualities in terms of dynamics and overall tone.

Because of this, Fishmans are quickly becoming some of the most popular pickups because they are innovative and sound amazing.

This guitar has an ash body with a gorgeous caramelized maple neck and fingerboard (with 24 frets!) and depending on the model, it can come with a Gotoh synchronized tremolo or a traditional telecaster-style hardtail bridge. It’s good to know you have both options if you prefer one or the other.

Of course, this guitar also has locking tuners to provide optimal tuning stability regardless of which type of bridge you choose to go with.

As you’d expect with Charvel, this guitar has a lot of awesome specs that any metal guitarist will love. So, if you’re looking to get a fantastic telecaster-shaped guitar for metal at a more affordable price than the Fender Jim Root model, I highly recommend checking this one out.

Like the Stratocaster, the telecaster is a classic and timeless guitar model that has been associated with genres that have utilized its twangy sound, like country, blues, reggae, etc.

However, the truth is, these guitars are very versatile, and with humbuckers, these telecasters can be great for rock and metal. In this article, I’ve picked out a handful of telecasters that get the job done:

While all these guitars have their unique perks, they all have humbuckers and comfortable necks to help people get the heavy tone and playability to make performing metal music easier.

Hopefully, at least one of these guitars will suit you well. Of course, they are all quite different from one another, but variety is a good thing.

Individuals will always have their personal preferences, and here, there’s a telecaster that they will find the most appealing for their needs.