The Precision (P-bass) and the Jazz (J-bass) are two of the most iconic bass designs ever created. They are best known as Fender models, but other brands have adopted this style to their own instruments, offering you many choices. However, knowing the difference between jazz and precision basses, aside from aesthetics, isn’t always apparent, and in this article, I will cover what sets these two bass designs apart as well as how they are similar, based primarily on Fender’s instruments, so you can decide which one is right for you.

The Fender Precision bass, or P-bass, is the first commercially-successful bass ever produced. The only electric bass that came before Leo Fender’s invention of the P-bass in 1951 was Paul Tutmarc’s design in the 1930s, so there was nearly a 20-year gap between these two different creations. Nonetheless, the original electric bass was influential on Leo Fender’s work.

The term “precision” derives from the accuracy a person can get in comparison to the double-basses that were used in the bands during that time. These double-basses were fretless, so adding metal frets gave the player a more precise pitch.

Earlier models resembled a Telecaster guitar but were later modified to match the Stratocaster guitars, by having similar cutaways and pickguard shapes and material. This design is still being used today and will probably remain the same for the foreseeable future.

Fender P-basses used to look like this before becoming what we know them as today!

Another distinct part of the Precision Bass is the pickups on them. Although this wasn’t the original design, since the 1960s, these basses have used a split-coil humbucker, which is separated into two pieces. This type of design is now appropriately referred to as a P-bass or P-style pickup, and many other brands have adopted it on their instruments. Several pickup manufacturers have also created their own P-style pickups as well.

Nonetheless, this pickup was intended to be more noise-canceling than its predecessors, and it’s what gives this instrument its powerful reputation. With its volume and tone knobs, you some control over your sound, but it’s intended to be a very simple and straightforward setup. Some of the most famous bassists who employ this design are Steve Harris from Iron Maiden, Geezer Butler from Black Sabbath, Frank Bello from Anthrax, Roger Waters from Pink Floyd, Sting from The Police, John Deacon from Queen, and countless others.

Overall, this is the main thing that makes the P-bass a unique instrument, and not the overall construction. Typically, the mid-ranged Fender instruments are made with an alder body, and you can choose between having a maple or Pau Ferro fretboard. Rosewood can still be an option for some, but many of the newer ones are being replaced by Pau Ferro, which looks similar. The wood that they use can also be found on the J-basses as well. Precision and Jazz basses also use the same type of bridges.

Another thing to keep in mind is that, depending on the brand, P-bass necks can be slightly thicker than a J-bass, particularly at the nut, so take this into consideration if you’re thinking about getting one of these basses in the future.

Coming a bit later after the introduction of the Precision Bass, the next most popular bass is the Jazz, which is also known as the J-bass. This design was first made public in the early 1960s and was meant to be the counterpart to the Fender Jazzmaster guitar, similar to how the P-bass and the Telecaster, and later on, the Stratocaster, are closely related.

Compared to the design of the P-bass, the J-bass isn’t as symmetrical, but it’s still very comfortable to sit down and play with one of these instruments.

As the name suggests, these instruments were meant for jazz performers, particular ones who played the upright bass, and this instrument’s tone – which is bright and punchy, certainly contributed to its popularity in jazz circles, and it was the bass-of-choice for Jaco Pastorius. Compared to the P-bass, which has more low-end, this one has more high-mids and treble.

Some Fender Jazz basses, like this one used by Jaco Pastorius, didn’t have a pickguard.

Also, unlike the Precision bass, Jazz basses have two separate single-coil pickups; one is placed at the bridge, whereas the other is towards the center of the bass. However, this one is still referred to as the neck pickup, just like on a guitar.

J-basses typically also come with two volume knobs and one tone, which overall, give you a bit more versatility and flexibility with your sound. Some other jazz basses from other brands may come with additional control knobs though.

As mentioned before, the majority of the specs between a Jazz vs. Precision bass are mostly the same, so you don’t really need to worry about that too much when trying to decide between them. The pickups are what give this bass its characteristic bite and growl tone, just like how the P-bass has a thicker, more powerful one from its split humbucker.

More importantly, who are your favorite players? In addition to Jaco Pastorius from Weather Report, legendary bassists like Marcus Miller, who has played with many Jazz icons, Geddy Lee from Rush, and John Paul Jones from Led Zeppelin were known to use Jazz basses during their careers. If you tend to gravitate towards the sound of these guys more so than some of the ones mentioned in the previous section, you’ll probably enjoy a J-bass more.

Now, one of the most overlooked models when trying to decide between a P-bass vs. J-bass is the PJ bass. With one of these instruments, you would think that you’re getting the best of both worlds, but this isn’t necessarily the case. Like, the P-bass and J-bass debacle, a PJ has its own unique sound as well.

Because different brands have a PJ bass model, you can expect variations in things such as neck thicknesses, control knobs, and the overall design of the body, but one thing that they will all have in common is the P-style pickup in the neck and a j-style at the bridge.

Sure, you can use the P and J pickups by themselves, but using them both at the same time is sort of a nice compromise between the two bass models. This is where the best of both worlds thing often comes in, but in reality, it’s just a different tone, kind of like mixing colors. In my experience, I really enjoy the sound of the P and J pickups being blended. Depending on where you are playing, you can get a beefier Jazz tone or a brighter P-bass one.

My first bass is a 1989 Ibanez SR1000 which uses a Dimarzio/IBZ PJ set, which came stock on the instrument. It also uses an ebony fretboard, which isn’t super common on Fender guitars and basses. Personally, I like to play towards the middle, especially since I use the P-pickup as an anchor when playing on the low-E string, and many of my friends have commented on how warm, yet sweet, it sounds. 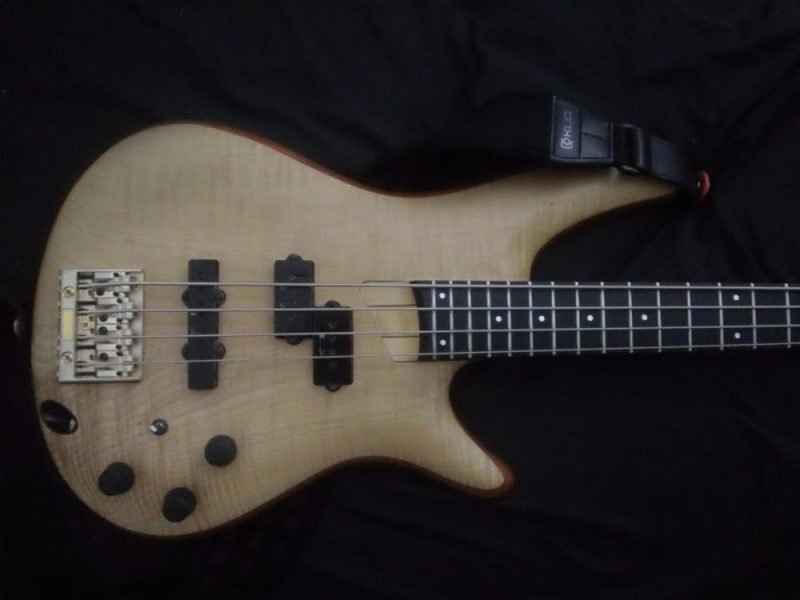 Depending on the individual, choosing a PJ bass might add another set of challenges or it can actually simplify your search when trying to decide between regular Precision or Jazz basses, especially ones by Fender. Nowadays, some Fender basses opted to use the PJ design, like on their Mustang basses and the deluxe Precisions.

Therefore, if you’re still having some trouble, you’re still not completely out of options, even if you’re set on getting a Fender instrument. Even the Squier Affinity models have a PJ option and sound very decent for their price range. These are perfect for beginners!

At the end of the day, the Precision vs. Jazz bass debacle shouldn’t be about which one is better. They are just different instruments, and they have a different sound to them. This is mainly due to the pickups, and not how they are constructed.

If you are a beginner or intermediate player, either one should be just fine for you, and none will make an enormous impact on your ability to play songs. The neck on a P-bass is generally thicker, but it won’t hold you back. In fact, some people prefer the feel of these necks over slimmer ones, like on a J-bass. Kind of like how people love Gibson Les Paul guitars over Ibanez ones. It’s all a matter of personal preference.

While the more advanced players sometimes often get accustomed to one or the other because it makes up a huge part of their sound, like Steve Harris, there are many pros who just end up getting both, because the sound of each of them is distinct, and they serve a different purpose, just like how 4, 5, and 6 string basses can be situational.

While looks can definitely influence your purchase, don’t let it be the main focus, and consider the sound first. Take the time to think about your favorite players and what they use as well as what kind of sound you want in your own music. This should be your main priority! Now, if you have an appreciation for everyone, and don’t have a preference for what kind of tone you want, then you can probably start adding aesthetics into the equation if it will help you come to a conclusion.

For those just getting started out though, it’s more imperative that you pick up an instrument as soon as you can. Your time is valuable, and it can be used towards practicing and growing with any bass. Somewhere down the line though, you might run into a situation where you’ll need to pick out a Jazz or P-bass, and hopefully, this article has given you the knowledge to help you when that time comes.