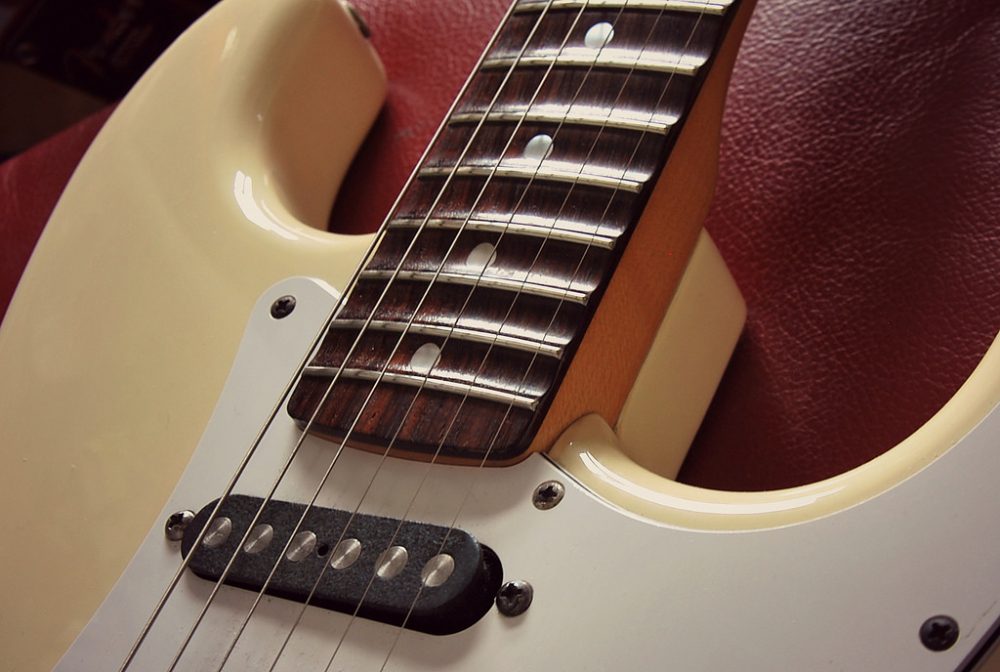 Because they are relatively uncommon, a lot of questions regarding scalloped fingerboards tend to come up. I believe that the primary reason for all of the curiosity is that there aren’t too many guitars with this feature; it’s more or less a custom job (unless, of course, you’re lucky and find a guitar that has a fretboard that’s scalloped already). In this article, I will cover the pros and cons of scalloped fretboards to help you decide whether or not they are right for you.

What Are Scalloped Frets?

If you’ve never heard of scalloped frets before or you’re just intrigued as to what they’re all about, it’s pretty simple to explain and get you all caught up.

Scalloping is a technique that involves carefully sanding the fretboard wood down so that it becomes a “U” shape instead than being flat. Although they aren’t common, especially on production-line guitars, this technique has been around before guitars were even invented, and used on old fretted instruments, especially in the East.

“So what?”, You may ask. Although it doesn’t sound like anything special, this process actually makes some pretty significant changes to how the instrument feels and plays, which will be discussed more in depth as this guide goes on.

WARNING: While the scalloping method sounds straightforward enough, I highly recommend that you do not attempt to do this to your guitars on your own if you have no experience making such modifications.

Without understanding your fretboard’s radius and other critical aspects, it is possible to sand too deep and cause irreversible damage to your fretboard. Leave it to the professionals or get plenty of practice on junk guitars before doing this procedure to your main instruments!

With this brief explanation and disclaimer out of the way, let’s start off by talking about the perks of having a scalloped fingerboard.

The Pros of Scalloped Fretboards

Having a guitar with a scalloped neck offers a couple of benefits that you wouldn’t otherwise be able to have with a regular one. These are the main things you’ll enjoy by having one:

The first benefit of scalloped fretboards is probably the one you’ll be able to take advantage of right away, and let’s be honest here – I believe it’s the main reason why they are relevant.

People can think whatever they want about Yngwie Malmsteen, but he is one of the most influential guitarists of all time. Not only did he play a crucial part in integrating classical elements into rock and metal music (along with Blackmore), he also has one of the most identifiable sounds in the genre.

This is largely due to his bending and vibrato style, and all of his guitars have had a fully scalloped Strat neck that helped him to develop his signature sound.

I’m not saying you’ll automatically sound like Malmsteen or Blackmore by getting a scalloped neck, but you will see some improvement in your own bending and vibrato technique as well.

The reason it works is that the wood is curved inwards, which means that your fingers and the string will have decreased friction overall. Since they shouldn’t be making contact with the wood, bending and vibrato should feel effortless and be more controlled.

While note separation is often considered a by-product of having better guitar pickups, you can have more clarity with your notes by using a scalloped fretboard.

This clearness will be more apparent by playing scales on your guitar, especially if you are using legato techniques, especially hammer-ons and pull-offs.

The main reason for this benefit is likely because the player will need to adopt a lighter touch when playing with one, and really focus on technique and being deliberate with each note.

However, another possible reason for this is that since wood has been removed from the fretboard during the sanding process, this gives the instrument less material, makes it lighter, and alters the resonance of the guitar and its vibrations.

This lesson from Yngwie shows you the difference between staccato and legato and how it sounds on his scalloped fretboard:

The Cons of Scalloped Fretboards

Although the benefits of using a scalloped fretboard might sound absolutely amazing, there are also a couple of cons to using one. Some of these may actually be a dealbreaker to some (but not everyone!). Either way, these are definitely things you should be aware of when trying to decide whether to use a scalloped fretboard vs. a regular one.

Accidentally Pressing The Notes Out Of Tune

One of the most common complaints or concerns regarding scalloped frets is that it can be very easy to make notes go sharp when playing one.

This is definitely a problem when playing guitar chords, and millions of guitarists enjoy playing aggressively and really digging into the fretboard.

Unfortunately, that won’t fly with a scalloped fretboard.

Remember how I mentioned that guitarists would need to play with a softer touch when commanding these? Not only will playing with a lighter feel give you a smoother tone, but it will prevent you from sounding awful on a guitar with a scalloped fingerboard too.

Thankfully, there is a practical solution out there for those who aren’t quite willing to completely adjust their entire playing style to accommodate the new fretboard.

It is common only to have a partial job too. Some people like to carve their fretboard from the 12th fret downwards, others might opt for the 15th fret – it’s preference. As for finding guitars with a partially scalloped fretboard for sale, some of the Steve Vai Jems (particularly the white 7V one) are concaved from the 21st to the 24th fret.

Doing something like this gives you the best of both worlds since it’s less likely that you’ll be playing chords on these higher registers. You still will need to careful to not press too hard on the higher frets though, since the rules still apply to them and it’s possible to bend them out of pitch accidentally.

It will just be less problematic in the areas where you’ll be playing chords, which is where people report their discontent with scalloped frets. Since the whole neck won’t be worked on, you won’t have to change your technique completely.

It Doesn’t Directly Make You A Faster Guitar Player

One of the myths surrounding scalloped fretboards is that it causes you to play faster. Many players see their guitar heroes and their special signature guitars, wonder why their guitar doesn’t have scalloped frets and make the association between them and speed.

In actuality, having one of these fretboards isn’t really a ticket to great dexterity, and having scallops will probably make you play slower in the beginning. You will have to take time to get used to the feel of it.

On the other hand, the only way that these different frets can make you play guitar faster is that it will force you to pay attention to your technique, and once again, play more delicately.

With a lighter touch, you will reduce the tension in your hands, and also probably make shorter movements to get to the next note, which relates to the economy of motion of your fretting hand.

This term “economy of motion” is discussed a lot when talking about the picking hand, but it’s just as important with the fretting one; the two also need to be synchronized in order to achieve great speed.

Although a ton of guitarists will be disappointed that a scalloped fretboard isn’t the key to faster guitar playing, they should appreciate the fact that it will help them refine their technique, which is way better in the long run.

Imagine having impeccable guitar technique and scalloped frets? Sounds like an amazing combination to me!

How Much Does A Scalloped Fretboard Cost?

If you’ve read up to this point and already made up your mind that you want to get some work done on your guitar, you can take it into the shop and get some scallops.

It will absolutely cost you a pretty penny for sure though! I’ve heard of techs and luthiers charging anywhere from $10 to $25 per fret. It’s definitely not cheap.

This is because it is a time-consuming operation, and not to mention, kind of risky, especially if it is all done by hand.

Alternatively, an option that may interest you is purchasing a replacement neck from a custom guitar part company, such as Warmoth.

However, in general, a brand new guitar fretboard will almost always be more expensive than getting the job done, but it’s also the safer, and possibly less time-consuming (I’m unsure how long it takes them to make the custom neck).

Overall, the cost of the new neck and fretboard depends on the type of wood you choose. Warmoth basically has everything you’ll need, but because there are so many different options to choose from, the cost will vary.  From what I’ve noticed from playing with their Custom Neck Builder though, the scalloping option alone costs just over $100.

Some guitarists love scalloped fretboards, and others hate them, but if you’re totally new to them, you should try them out before committing to them.

Keep in mind though, some guitarists try them once and decide right away that they don’t like them. I believe that they need a fair amount of time to get used to – not everyone will feel comfortable or sound amazing with them right away.

As mentioned before, it will probably be difficult to find a guitar with a scalloped neck for sale in a store aside from a few exceptions. Playing with the Yngwie strat will give you the full scalloped experience, but realistically, your best chance of trying them is on the white Ibanez Jem. They’re the more common one out of the two guitars after all.

Nonetheless, hopefully, this guide to the pros and cons of scalloped fingerboards has influenced your decision in one way or another. If you’re sold on the idea of scallops and plan on getting them, I think you’ll love the better bends and vibrato that comes with them, and any drawbacks will eventually diminish with time and experience.