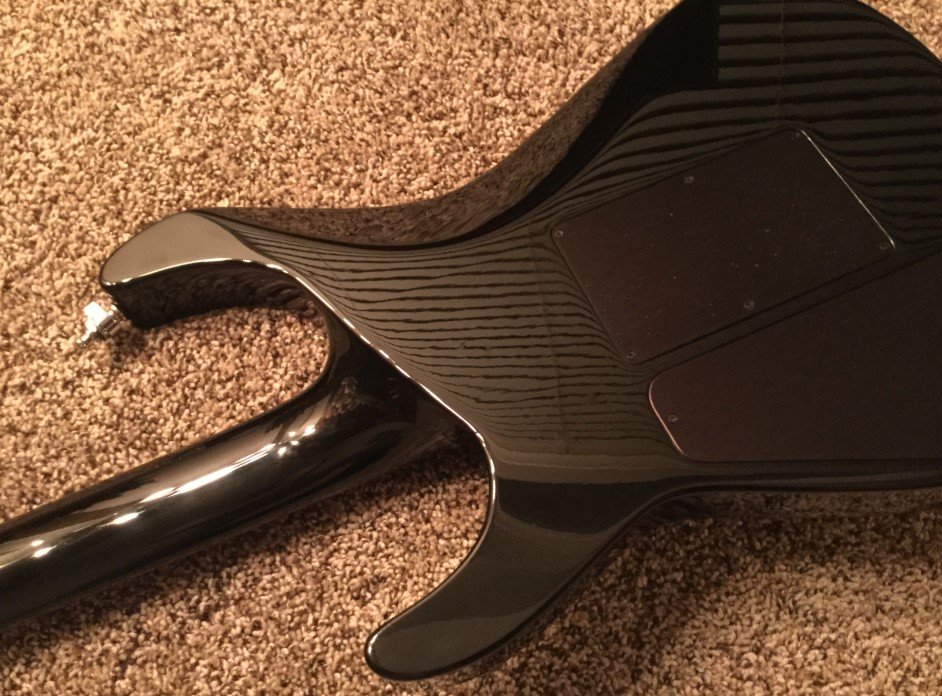 Neck-through-body guitars, often just called “neck-through” for short, are specially-constructed instruments and are less common than set-in or bolt-on necks. It takes a lot of work for a luthier to make a guitar with this construction, and this is why it’s typically seen on higher-end guitars. It’s much harder to mass-produce them, and for the extra cost, is it worth it? To many people, it is, and in this article, I will discuss where neck-through guitars shine as well as where they can potentially fall short by covering some of their pros and cons.

The Benefits of Neck-Through Guitars

If you are thinking about purchasing a guitar with a neck-through-body construction, there are definitely some reasons why it might be a really good decision. In this section, we will go over the pros of neck-through guitars and why it can be worth owning one.

Everyone wants to be able to reach every note they have available to them seamlessly, and having a neck-through guitar can definitely help facilitate this by giving you better access to those upper frets.

This mainly has to do with neck-through-body construction having a smaller heel joint than bolt-on guitars.

However, it’s not necessary to have a neck-through-body guitar to get the most out of your guitar.

While many superstrat guitars, like the Jackson Soloist, have a neck-through design, there are many other guitars with a bolt-on neck that are made with an ergonomic joint that can give you easy access to the highest frets.

For example, I believe the majority of Ibanez guitars (which are also superstrats) are bolt-on, and they are some of the most comfortable guitars I’ve played. They do have some great neck-through models too, nonetheless.

In general, though, when comparing neck-through vs. bolt-on, the neck-through will almost always come up on top in terms of playability, with some exceptions!

I have never seen a bad-looking neck-through-body guitar in my life. In fact, I think they all look amazing.

There’s something about the consistent appearance that these guitars have that makes them pleasing to look at.

Sure, those who are watching you play won’t be able to see the backside of the guitar, but you will every time you pick up the guitar and start jamming.

Nonetheless, I don’t find bolt-on guitars are ugly by any means; I don’t mind them at all, but if you compare the two, I think the neck-through guitars always look better to me because of the seamless paint color or matching wood finish that you’ll find on most of them. You can also get the same benefit with set-neck guitars as well.

Check out this Jackson Soloist, and tell me that it doesn’t look awesome!

Another perk to having a neck-through guitar is that since it is constructed as one piece, it is much tighter and more secure than a bolt-on guitar.

This means that it’s less likely to react to temperature and humidity changes, which can cause a neck to start doing all sorts of things, such as the neck angle shifting and not letting your guitar stay in tune.

With bolt-on guitars, since the neck is separated from the guitar, this means that it will be more susceptible to movement if the climate changes.

This doesn’t mean that you shouldn’t pay attention to these things at all; you should always use a humidifier if you’re using an expensive neck-through-guitar. You don’t want the wood to start cracking!

Overall, you shouldn’t have to worry about this nearly as much with a neck-through guitar compared to a bolt-on, though, but you still need to be mindful of these things and treat your instrument with care.

Due to the nature of neck-through guitars, they tend to have better craftsmanship than their bolt-on counterparts.

It takes time to make these guitars, and doing it wrong can potentially ruin the entire project, which is why you typically see neck-through-body options on more expensive instruments, like high-end production models and custom shop designs.

For mass-produced guitars, bolt-on is much easier and cost-effective to make compared to neck-through-body, and this is why it’s the preferred choice for many manufacturers and millions of consumers.

Unfortunately, this can also mean that those guitars don’t have as much attention to detail and care than neck-through models.

However, this isn’t always the case, and it’s highly dependent on the models that you’re comparing.

For instance, if you take a look at an Ibanez Prestige or Premium model that’s bolt-on and put it against a Jackson Soloist with a similar price point of around the $1000 range, they both should have comparable build quality – there are finely-crafted bolt-on guitars that are absolutely competitive with neck-throughs.

The Drawbacks of Neck-Through Guitars

As you can see, there are plenty of things to look forward to with these instruments, but there are some things that you should also consider that you might not find too favorable. This section will cover the cons of neck-through-body guitars.

Neck-through guitars are almost always more expensive than a bolt-on one that is at a similar level. The same goes for comparing neck-through vs. set-neck.

This is because of the craftsmanship mentioned before and the time it takes for a luthier to make one.

With bolt-on guitars, attaching the neck onto the guitar is quite straightforward, and it doesn’t take nearly as much work to put together.

Additionally, the parts don’t need to be made and assembled at the same spot, but that’s not the case with neck-throughs.

You’re paying extra for the look, consistency, and quality that comes from the attention that making a neck-through requires, and that’s why you’ll typically see this kind of work on mid-to-high-end guitars like this ESP Horizon.

Ultimately, it’s up to you to decide whether or not that premium is worth it or not. Many do, whereas others opt for bolt-ons because they can get the job done too.

One of the biggest risks of owning a neck-through-body guitar is the possibility of irreversible damage to the guitar.

If you accidentally break part of your headstock, you might still be okay, but if the entire thing falls off, you’re looking at a very expensive repair job.

Worst case scenario, if you happen to snap your entire neck, fixing it might be impossible, and if it is, the task of repairing the instrument might be more expensive than it is worth. In this case, even if it can potentially be salvaged, it’s still effectively a ruined guitar.

Depending on the situation, the same can go for set-necks too. If you happen to drop a Gibson Les Paul and break the neck, it can cost a fortune to repair.

However, with bolt-ons, if something tragic happens to the guitar, you can simply buy a new neck that matches the old one and swap the broken one out, and I think this is one of the benefits of that type of construction.

Fortunately, these kinds of situations don’t really occur too often, unless you’re inviting them by being rowdy, like doing spins on stage with your guitar, and the strap detaches, making your guitar go flying.

Of course, accidents do happen too, so if you get a neck-through guitar, just be extra careful about how you handle and store your guitar.

It has been debated for decades whether or not a neck-through guitar has tonal benefits, particularly with sustain.

The premise is that because of the construction of neck-through-body guitars, energy-transfer is more efficient than bolt-ons, because it is one piece, and this leads to improved sustain.

In my experience, though, any benefits in tone have largely been negligible. I have played multiple neck-through guitars, and while they did have excellent sustain, it’s hard to say if they were better than my bolt-ons.

They were quite similar, and my ears can hardly tell the difference, and that seems to be the consensus with many other guitarists. I think an actual science experiment needs to be carried out, but I’m willing to bet that the differences will be minuscule.

In the grand scheme of things, it’s the wood that your guitar is made from, the pickups and other hardware that it uses, and the player that creates the tone. All of these factors individually and collectively will have a bigger impact than the joint where the neck meets the guitar.

This is why it’s important to compare models that are of similar build quality and specifications.

Of course, a cheap bolt-on guitar will probably have a lot of air pockets in the joint, and this will create worse tone and sustain than a neck-through. However, this is an unfair comparison because there are plenty of bolt-on guitars with impeccable construction that are incredible sounding.

At the end of the day, just go with what looks and sounds good to you, as there probably isn’t really much of a difference between neck-throughs and bolt-ons in this area.

While there are some nice perks to neck-through-body guitars, and the pros outweigh the cons, they are not always better than bolt-on guitars, especially if you’re looking in the superstrat market.

They’re just different, and as mentioned before, it’s highly dependent on the specific guitar.

Some people will stick with neck-through models, whereas another person will prefer bolt-ons. It can be as simple as them having the reassurance that it’s not the end of the world if they accidentally break their guitar’s neck.

Hopefully, by reading this article, I was able to answer many of your questions about these types of guitars. My main piece of advice is to shop around and play with different instruments to see which ones you like the most – you will find high-quality, great-sounding guitars of all varieties, whether it’s neck-through, bolt-on, or a set-neck.

To learn more about topics related to guitar construction, be sure to check out some more of my guides, such as this one about fretboard woods, which can absolutely make a noticeable difference in your tone.

Happy jamming, and see you in the next one!