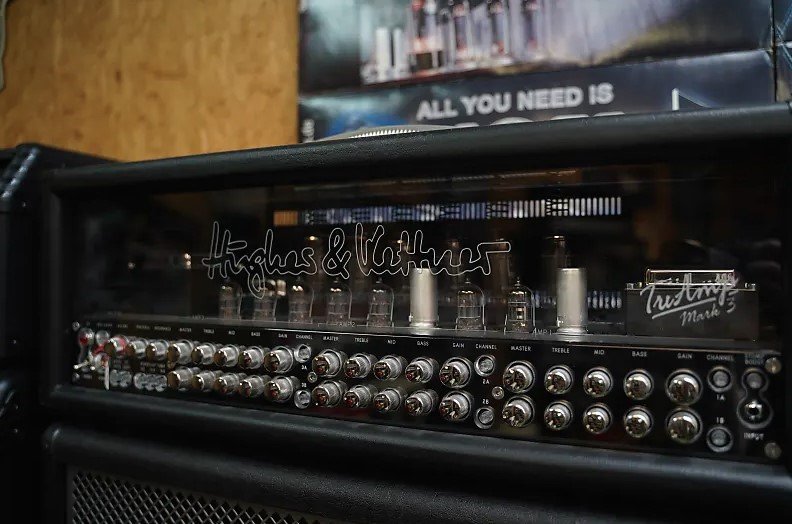 Tube amps have been considered to be the cream of the crop when it comes to guitar amplifiers, and they continue to be revered by guitarists all over the world. But what exactly makes tube or valve amplifiers so appealing to people? What are the potential drawbacks of owning one? Let’s take a closer look at some of the pros and cons of tube amplifiers so you can decide if these are the best choice for you.

The Pros Of Tube Amps

Tube amps have some notable benefits that people love and allow these amplifiers to continue to pass the test of time and be used in countless genres. These are the main ones:

Tube amps are often regarded as being able to produce a warmer, more “ natural” sound than solid state amplifiers because the tone is created by pushing the amp’s volume. This phenomenon is where the term “overdrive” comes from.

When you turn up the volume on a tube amp, it increases gain, distorts the signal, and creates saturation, giving your sound more character and depth. This waveform of a tube amp is also described as being rounder, which contributes to the warmer sound for which tube amps are known.

The quality of distortion and all of the pleasant harmonics that are produced are frequently cited as reasons why many people prefer tube amplifiers.

In addition to the lovely tones that tube amps can provide, they are also very responsive to changes in your guitar playing. This makes tube amps quite expressive!

Because of the natural compression that tube amps have, if you want to clean up your sound, you can try to do so by playing lightly and more delicately. Conversely, if you need to add some grit, you can do that too by adding a more aggressive pick attack.

Sure, you can do this with many high-quality solid-state and modeling amps, but sometimes these have a reputation for being more harsh or sterile than a tube or valve amplifier.

In general, tube amps are made with higher quality components than solid state amps. This is one of the reasons why they tend to be more expensive. There are also more working parts inside of them than solid states, but this will be discussed more later.

Because they have more high-quality parts, tube amps usually last longer. This is why many people who invest in a good tube amp keep it for years, or even decades. They can also hold their value quite well over time.

The Cons of Tube Amps

Although tube amplifiers can be finely-crafted and sound amazing, there are some downsides to using them that not everyone will appreciate. Here are some to be aware of:

The valves or “tubes” found in tube amps don’t last forever; as you continue to play it, they will start to die out. Eventually, you will need to replace them so that your amp sounds amazing again. Unfortunately, this unavoidable aspect of tube amplifiers can be inconvenient to some people, and it’s not exactly cheap.

Also, since tube amps have more working parts in them, there may be an increased risk of something malfunctioning, which can mean more repairs.

However, if you take good care of your tube amp and have it serviced regularly, it can last for many years. In fact, some people say that tube amps actually sound better as they age because the tubes “burn in” and produce more pleasing harmonics.

As I mentioned before, tube amps usually cost more than solid-state amplifiers. This is because they are made with higher quality parts, and more labor is involved in the construction process because they have more components overall.

If you’re on a tight budget, a tube amp might not be the best choice for you, but luckily, solid-states have improved a lot over the years, so you can find some affordable ones that sound great.

Some people swear by tube amps; however, with all of the advanced technology out there, there’s a lot of modeling software that does a pretty close job of emulating a tube amp. Sometimes even at a fraction of the cost of one.

On the other hand, some standalone amp modelers, like the Axe-Fx and Kemper Profiler, can cost as much as tube amps because of how sophisticated they are.

Tube amps aren’t as power-efficient as their solid-state counterparts, and all of those tubes in the back of the amp can produce a lot of heat because of all of the electricity used to power this amp up and give it its colossal sound.

Although tube amps are designed to deal with heat, it can be an issue if you’re using your amp in a small room with poor ventilation because it can get quite hot. Some people don’t mind the heat, but others prefer to avoid it, especially in the summertime.

Not The Most “Home-Friendly” Choice

Depending on your living situation, tube amplifiers aren’t always the best option due to noise levels. They’re almost always a big no-no when playing guitar in apartments and will likely get you some complaints. Yes, some smaller tube amps can still sound fantastic at lower volumes, but in general, tube amps can get loud pretty quickly even if you dial it up just a little bit, especially the half-stacks.

To get the full potential from a tube amp, you want to crank up the volume to get more saturation. Unfortunately, this may lead to complaints from family members and neighbors.

On the other hand, solid-state amps sound pretty consistent regardless of the volume you play them, and they also generally have headphone jacks, which make them ideal for practicing around the house.

However, if you’re going to be able to use a tube amp where its loudness won’t really be an issue, then, by all means, pick one up.

Now that you know some of the pros and cons of tube amps, you can decide if this type of amplifier is right for you. If you’re looking for an amp that will give you excellent sound quality and last for many years if cared for properly, then a tube amp is definitely worth considering.

Just keep in mind that they will require more upkeep than a solid-state amplifier, which can have its own benefits you should look into. With that in mind, hopefully, you now have a much better idea of what to expect from your future amp.