While similar stringed instruments have existed during ancient times, particularly in the East, the modern guitar as we know it originated in Spain. It started out with 4 and 5 strings, and eventually developed into a 6-string instrument sometime after the Baroque era of music.

Even though its ancestors were around before the invention of “Western music” and music theory, the modern guitar as we know it is part of this. Therefore it uses the lettering notation, repeats itself using octaves, and uses accidentals, which are your sharps and flats. This is the basis of how to understand guitar notes. Keep in mind, this mostly applies to places that speak English. Another way to understand the notes is through Do–Re–Mi–Fa–Sol–La–Si. This is known as solfege, and “Do” is the C-note. It also comes after S and completes the octave, which will be discussed shortly.

This section will be dedicated to the essential aspects of being able to navigate the fretboard. First, it introduces you to the notes, then dives into octaves and other intervals, and teaches you how they correlate with constructing scales and chords.

What Are The Basic Guitar Notes?

As mentioned before, the guitar uses the system of lettered notes with sharps and flats. Most of the time there will be a sharp and flat between each note going from, but there are two exceptions. When trying to learn how to remember guitar notes, you’ll have to keep in mind that there is no sharp in between B and C as well as E and F. When no sharps or flats are used, this is known as a natural note. These terms and concepts actually apply to all western instruments, and it is a basic musical concept.

Therefore the main notes you will need to know are C-D-E-F-G-A-B and apply the accidentals where needed. This makes it a total of 12 notes that you will need to get acquainted with. Scales usually dictate the guitar notes in order. For example, if you were to list some type of C-scale in chronological order, it will start with C.

The essential guitar notes repeat themselves over and over many times on the fretboard. When you play a scale from the tonic all the way to note again, just at a different frequency, this is known as an octave. So, if you take the C-major scale (no sharps and flats) and go C-D-E-F-G-A-B and back to C, the interval between both C’s is known as an octave.

Here is an illustration of a fretboard so you can get an idea of what we’re talking about here.

Octaves are one type of interval. However, there are even more intervals that you need to understand when learning how to understand guitar notes and their relationship from one another.

An interval can be described as the distance between two pitches. Most of the time they will be different pitches because if they’re the same pitch, it’s really just an octave.

When trying to tackle intervals and understand guitar notes up the fretboard, you need to first start with learning about half and whole steps. These are also known as semitones and whole-tones, respectively. Thankfully, compared to other instruments, it’s easy to understand a half and a whole step on the guitar. A half step is simply one fret whereas a whole step is two frets.

By using this reference when figuring out how to understand guitar notes, steps, and intervals we can use this as a visual aid, assuming you don’t have the guitar in front of you. This is useful though because notes are labeled. Also, all of these fretboards will be based on if you are in standard tuning.

It’s a half step between B and C as well as E and F, but you can see that the distance between C and D, then D and E, etc. are whole steps. If you were to do a half step after any of these, it would sharpen each pitch. For example, half step up from G would be G-sharp. While this would be out of key (this is C-major), it would be used in other circumstances, such as playing in the key of C-minor, and the C-minor scale. This singular half-step is also known as the minor second interval.

Like the perfect octave, this is yet another interval out of many. Here’s a list of all of them for your reference.

Whew! This might be a lot to take in, but this is useful information and shows how guitar notes work and tie in with each other. Another useful tool is looking at and memorizing the Circle of Fifths chart. It’s mainly used for learning how many sharps and flats are in a given key, but you can also use it to know what the perfect fifth is from a given note. For instance, the fifth from a C is a G. The circle of fifths will be posted below: 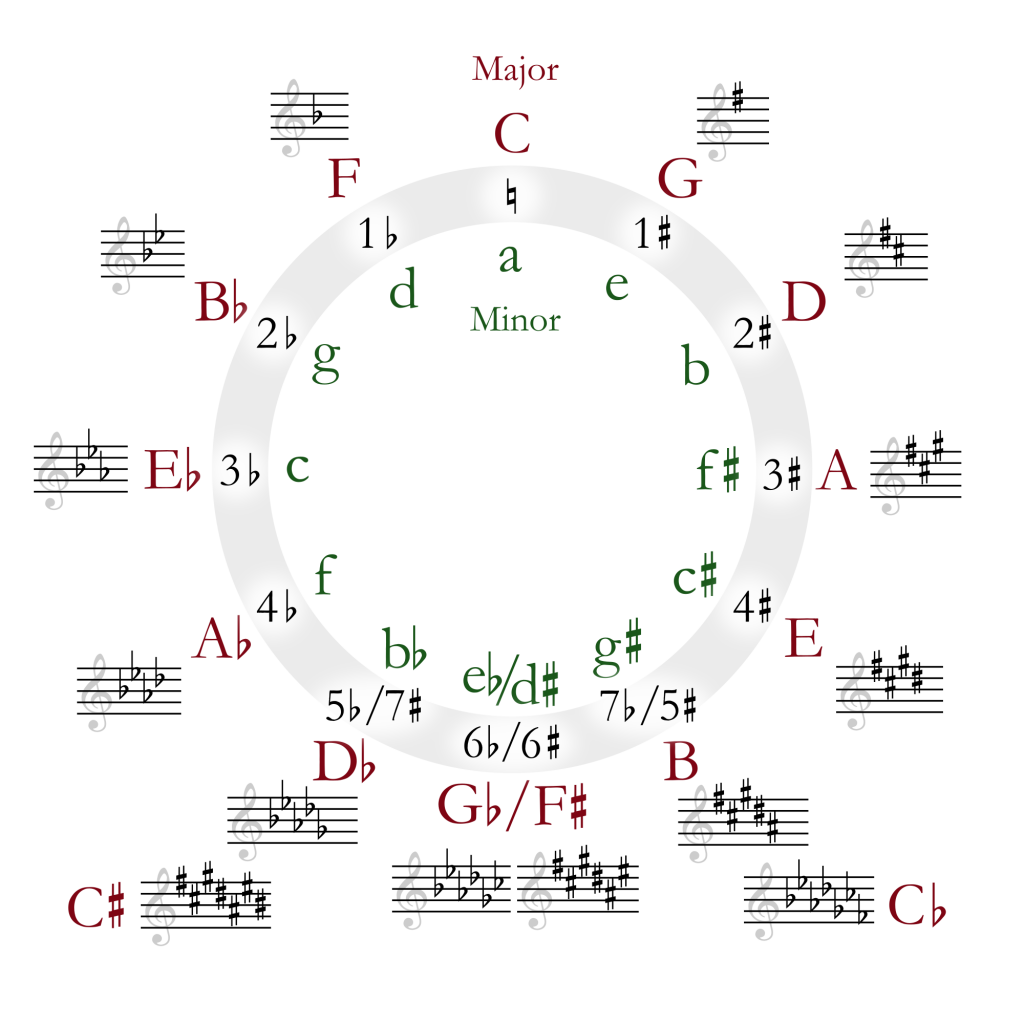 That being said, without an understanding of steps and intervals, scales and chords cannot be understood or formed. Scales and chords have characteristics that are based on these intervals and have formulas.

If you wanted to make a major chord, you’d use the root note, a major third and a perfect fifth.

For a minor chord, play the root note, minor third, and a perfect fifth together.

Regarding chords, a triad is a group of 3 different notes, that are also all a third apart from each other. They don’t necessarily need to be three total notes.

Triads are what the above examples are, and sometimes you will hear a chord being called a major or minor triad. However, not all chords are triads; there are all sorts of different chords out there, such as augmented, diminished, suspended, and of course, 7th chords.

The tuning of your guitar actually dictates where the notes will be positioned along the fretboard. There are all kinds of different tunings out there, but the most common one out there is standard tuning. Following this, it would be E-flat tuning (aka half-step down), Drop-D (“dropping” your low-E string to a D note; a full step) or even taking it a full step down.

For all intents and purposes, we will be assuming the guitar is in standard tuning in this article as well as others, unless stated otherwise. This is because it is the easiest to work with.

In standard tuning, your strings will be tuned to E-B-G-D-A-E. An easy way to remember this is “Everybody Gets Drunk After Easter.”All of the rules regarding semitones and whole-tones apply, and this is how you know where the other notes are on the fretboard.

Why Should You Learn Guitar Notes?

When trying to learn how to study guitar notes, you will have to really on memorization. This can be in the form of “landmarks,” such as knowing your middle-C is on the 3rd fret of the A-string, or just straight-up memorizing where each and every note is on it.

You can also learn about patterns and shapes. It may sound intimidating at first, but if you want to know how to learn guitar notes fast, you will simply need to put in the time, study the fretboard, and perhaps do some memorization drills to help you solidify the locations of the notes.

That being said, the ability to navigate around the fretboard is an amazing skill to have. If you have a decent grasp of theory, you will have a much better command of the guitar over someone who doesn’t. Knowing your scales, chords, and the locations of the notes will help you improvise and also communicate musical ideas much more effectively.

Additionally, with this knowledge, you can convert guitar notes to piano or any other instrument for that matter. Once you know how musical notes are related to each other, such as with chords and scales, you can easily apply it to any instrument. A piano will be one of the easier ones to transition to because the notes are all in the same place throughout the keyboard.

For example, your C will always be to the very left of the 2 black keys (these are sharps and flats), your B will be to the left of the C and to the right of the 3 black keys, and F will be to the left of it. This may sound slightly confusing, but it is basically just pointing out how you can use landmarks to help you start remembering where notes are. You can use the same concept by using guitar notes with frets.

However, even though there are patterns and spots to make memorization easier on the guitar, it’s easier to learn where notes are on the piano because they’re always in a set, linear spot.

This is useful for improvising, where you may have a chord chart. You see a chord coming up, and you know that you have a choice of 3 or 4 notes to pick from. However, it’s not intimidating because you know which ones to choose from and where you can find them.

Your guitar notes have applications to all musical concepts. It still uses the same rules as basically every western musical instrument. You can learn shapes and patterns; that’s cool too, but learning how scales and chords are constructed will open up new, and bigger, doors for you and your guitar playing.

There are formulas and ways that each of these are built to help you put them together. I have laid out these formulas for you to help you start learning how the basic major and minor chords and scales are made.

Shapes and patterns can be handy and worth practicing, but understanding guitar notes and keys are much more effective in the long-run. It will also help you become a more creative player too if you don’t depend on the shapes of scales. You will also be able to create inverted chords, which often sound more interesting than the basic chords shapes when learning guitar notes for beginners.

In order to do this, you should also have a solid understanding of intervals too. There are plenty of them, and there’s a list of them here to help you learn and memorize them. Learning the Circle of Fifths chart is mainly used for studying key signatures and sharps and flats, but knowing your perfect fifths from this visual aid can be a good reference point.

Learning the guitar notes and frets may sound a little tedious and boring at first, but trust me, it is incredibly beneficial. Knowing how to tune your guitar is probably the most basic use for knowing your notes, but it’s also needed for making chords and scales. Without an understanding of notes, you might not move onto more advanced music theory concepts (if you ever wanted to, of course).

You don’t need to learn notes right away to start playing the guitar, but it’s advisable to dedicate some time to studying your fretboard. I suggest about 5-10 minutes a day. Believe me, it adds up, and over time you will have great proficiency and move about the fretboard like never before.