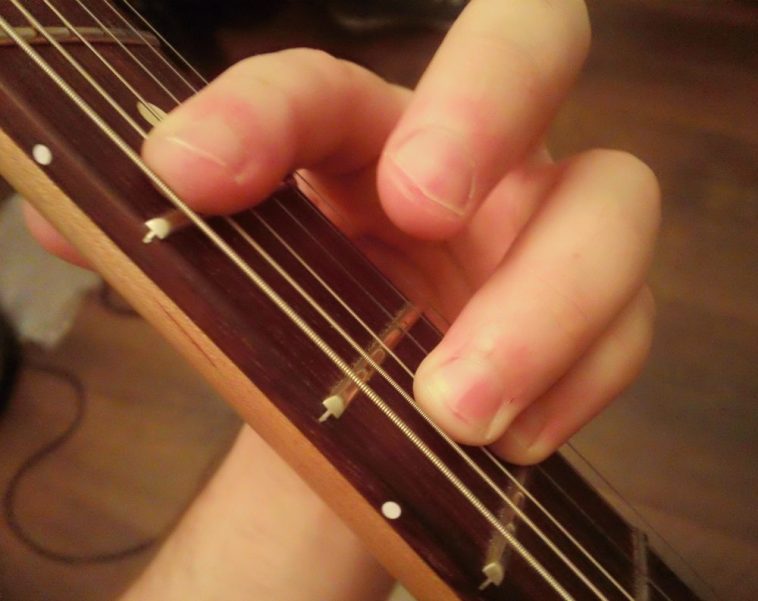 Whether it’s on an acoustic or an electric guitar, power chords are one of the first things beginners learn, but they will also be one of the most versatile concepts that you’ll use throughout your guitar journey. Even advanced players use them frequently, and many of your favorite songs were made from them! Although they’re easy to pick up, there is a little bit of background information about them, and by having an understanding of how power chords work, you can use them to their fullest potential.

What Are Power Chords?

As mentioned before, power chords are one of the first things that beginners will pick up when they start learning how to play the guitar. They are easy to play, but they are integral to many genres, especially within rock music.

They will easily be one of the most useful things to know when playing the instrument!

Power chords consist of two unique notes – the root and the perfect fifth, which is a specific interval. They also sometimes have the octave thrown in there, so sometimes there will be three frets played, but it’s still only two distinct pitches.

You don’t necessarily need to understand the theory behind them to perform power chords on the guitar, but the knowledge certainly helps and will open doors later on. In reality, though, most people just tend to know and get by solely by knowing the power chord shapes which look like this:

You will get a lot of mileage out of these shapes, and some of the greatest riffs of all time are made from power chords. For example, Iron Man by Black Sabbath is a classic example of an iconic riff that’s also one of the first ones that people learn on the guitar.

In addition to the specific notes – the root and fifth, power chords are typically associated with the distorted sound of an electric guitar, and the interval sounds strong if you play them separately.

Think of the first couple of notes in the main melody of the Star Wars title theme composed by John Williams, even played consecutively going from the root to the perfect fifth is a powerful sounding interval. Try it out to see what I mean:

In a technical sense, power chords are somewhat of a misnomer in regards to their status as a chord, but over time, it’s been accepted. This section will explain why they aren’t truly chords.

These “chords” are actually known as “dyads,” which imply two pitches being played together, not just the root and fifth, which is what makes a power chord. The power chords are only one of many possible dyads that can be played on an instrument. On a piece of music, they will often be written out as C5, G5, D5, etc. or C(no3), G(no3), D(no3), and so on. Because of this, you’ll sometimes see them called five or fifth chords, too.

Normally, chords require three distinct pitches to be played – the root, the third, and the fifth. This is known as a triad, and if you want to learn more about these, I’ve written a thorough guide about those too!

The main difference here is the third is present, but depending on which one you’re working with, this is how you get major and minor chords. There are major thirds and minor thirds, and this is determined by the key you are in.

Power chords are missing that “third” interval which gives a true chord it’s defining qualities, and this is also why they’re also referred to as a five chord. Despite having a reputation for being strong and effective sounding, power chords are not major nor minor. However, because they are neutral, they can be used in place of major and minor chords to great effect.

In the next section, I will elaborate some more on this.

How Power Chords Are Used

As mentioned earlier, power chords are super versatile things you can play on the guitar, and it’s impossible to count how many riffs have been made solely from the use of them.

With them, the opportunities are endless, and both simple and complex ideas can be used just by using them!

You can make some cool riffs without knowing any theory at all and playing with the shapes and trusting your ear.

However, if you want to stay in key, it’s a good idea to know a little bit about music theory, so you know what specific power chords will work for the situation you are in.

For this, you’ll want to be able to list the notes of the key you are in and become familiar with the chord progression formulas for major and minor keys, which are often listed as Roman numerals; capitalized numerals imply major chords and lower-case ones are minor chords.

So, when working with this method, you’ll list the notes out in order, so you can see how it corresponds to each scale degree (the Roman numerals).

If you are working with the key of C-major, you’ll know that the notes are C-D-E-F-G-A-B. If you have a vi-IV-V-I chord progression, you can determine that you’ll need to play an A-minor chord, the F-major, a G-major, and a C-major one. Here is what that chord progression looks like for your reference:

Now, the beauty of power chords is that they are amazing substitutes for these major and minor chords. Because they are missing the “third” interval quality that makes a chord major or minor, they are ambiguous, but they still have the root and the fifth intervals, which makes them a perfect match for chords.

Instead of playing those chords listed earlier, you can play an A5, an F5, a G5, and a C5, all are power chords that are acceptable in that vi-IV-V-I progression.

To find the right power chords, you’ll want to be able to find the root notes, and this can require you to get more familiar with the notes on the fretboard, but, luckily, from here, you can just rely on the common power chord shapes on the guitar that I provided earlier.

It’s a good idea to be able to identify the 5th interval for every note, too, and a circle of 5ths chart can help you memorize them, but for now, and for simplicity’s sake, the shapes will do just fine.

The only drawback of this method is that in order to do this, you’ll need to have a basic idea of how major and minor scales work and how to be able the identity the key you want to play in, in the first place. But once you get the hang of it, all of this will make sense, and it’ll be a cinch to find the right power chords.

Learning how to play power chords is one of the simplest things a new player can do on the guitar, other than just playing a single note. Adding that second note can make all of the difference, though!

Nonetheless, beginners do have a tendency to use the wrong fingers when fretting power chords, but it’s easily fixable.

At the most basic level, if you’re playing a two-fret power chord, you’ll want to use your index finger for the root note and your ring finger for the fifth. If you like 3-fret power chords that incorporate the octave, you’ll use your pinky to fret that additional note. Here’s how it should look if you’re using three frets, if you’re only going to use two, just subtract the pinky finger. 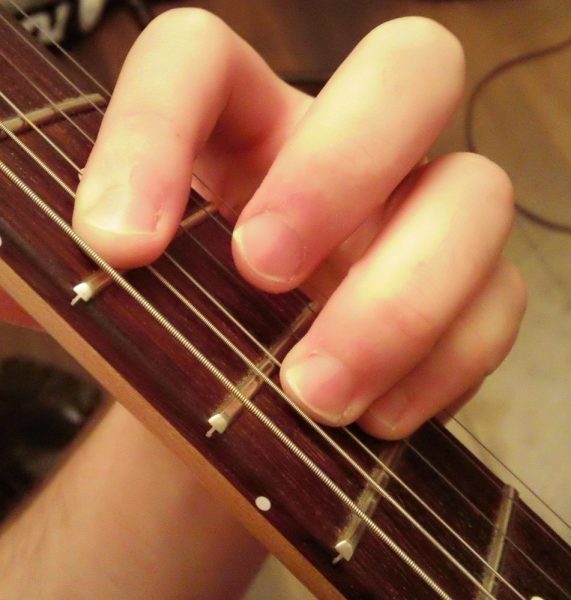 The index finger is on the root, the ring is on the fifth, and the pinky is on the octave here.

By having the middle and pinky fingers able to move around freely, you can easily transition into much bigger chords if you wanted to, or use the spider chord technique that was developed by Dave Mustaine.

If, by chance, you’ve started playing already and your fingerings are off – don’t worry! Like everything else, adjusting it might feel unnatural at first, but if you stick with it, it shouldn’t be difficult to break your old habits. It’s much better than it’s caught early than years down the road.

Using the method I recommended will free up your fingers, and let you do chord shapes like these ones. The spider chord is the third image!

If you’re a beginner guitarist, I hope that this guide to power chords has been helpful and will be useful in helping you get started on learning some of your favorite riffs.

Aside from the shapes, hopefully, you’ve learned what actually goes into making a power chord by reading into the theory behind it that I’ve provided for you.

Power chords are the bread-and-butter for many guitarists, and while you can certainly get by solely with the shapes and sounds of the power chords you are using, I think it’s useful to know a bit more about them, especially if you’re going to be using them throughout your time with the guitar.

From classic rock, punk, heavy metal, grunge, and even pop-tunes, the power chord has been essential to creating great riffs and hit songs, and part of the fun is just jamming and coming up with cool ideas. Who knows, maybe you’ll write the next best riff that people will remember forever.