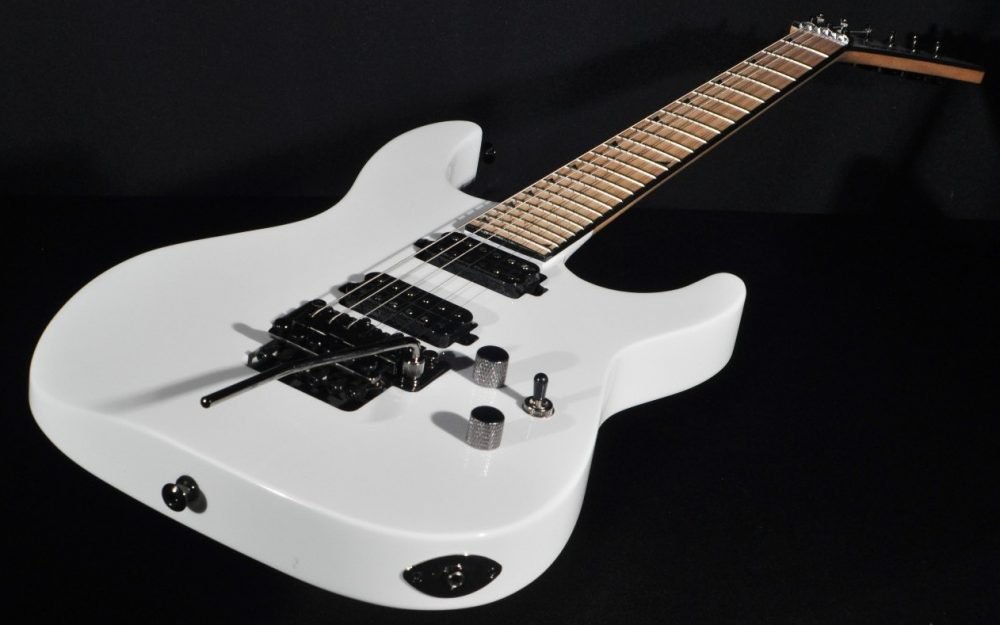 Compound radius guitar necks are quite popular amongst many guitarists but are they really that great and a game-changing feature? This article will discuss what they entail as well as the pros of a compound radius fingerboard so that you can decide if you want one for yourself on your next instrument.

What Does Compound Radius Mean?

A compound radius refers to having a different fretboard curvature from the nut all the way to the heel near the body. It’s important to understand that this does not imply having a thicker or thinner neck, and this is something different entirely.

Some fretboards on guitars will have little-to-no curvature and, therefore, be flatter, whereas many will be curved. What determines this is the radius of the fretboard, and guitars that have a compound radius will be rounder towards the nut and first fret and gradually become flatter as you go down the fretboard.

For example, a 12”-16” compound radius is a very commonly seen specification on most Charvel and Jackson guitars. The lower the radius, the rounder it will be compared to a higher one! In this case, these guitars will start out with a 12” and seamlessly move towards 16”.

This contrasts with many guitars that have one radius throughout the entire neck, like a lot of Stratocasters with a 9.5” radius. However, there are also many Fender Stratocasters, particularly the higher-end ones, that use a 9.5” to 12” or 14” compound radius.

Check out this illustration I’ve found that describes what I’m talking about:

While guitars that have a straight radius are still extremely popular and can feel great to play, there are a few benefits to having a compound radius fretboard vs. a straight radius, and as you continue to read, I’ll talk about the two main benefits of having one.

Having your fretboard be more rounded towards the nut of your guitar means that it will be a bit easier to play chords.

For me, this was pretty noticeable when I would try to do barre chords. Having it more rounded aligns better with the natural curvature of the finger and makes it easier to play these types of chords, rather than trying to keep your finger very flat to try to apply pressure evenly to each string and note.

You can even test the difference by playing barre chords (ones that rely on a finger, usually your index one, pressing down on many strings) towards the heel of the guitar, where the fretboard starts to become increasingly flat due to the higher radius.

While this is the most prominent difference that I’ve noticed, having a compound radius will still also be helpful for playing your regular open chords and big extended chords as well.

Ironically, though, classical guitars, which rely on a lot of chord positions in most pieces of music, are incredibly flat, but I suspect that the wider neck and larger string spacing still make chord-playing more accessible on those instruments.

On the other end of the fingerboard, having a compound radius is great for lead playing too, and this is because of a couple of things.

Firstly, having a flatter fretboard makes it easier to play leads, especially when it comes to bending notes. When your radius is less-rounded, it makes it less likely for your strings to get choked on your frets, which is an issue known as “fretting out.”

This can become problematic, mainly if you like to play with low-action, and having a compound radius can help with this too by having an easier time supporting a lower string height.

As you may know, lower action can certainly help with lead guitar playing by making it easier to sound a note without adding as much pressure. However, this doesn’t mean you can’t shred on a guitar with higher action and a smaller or straighter radius throughout the fretboard (i.e., most Fender Stratocasters).

Also, you can still get your action pretty low with a more rounded fretboard; it’s just that it’s typically more straightforward with a compound radius and helps prevent some of the problems mentioned above.

Here’s a video that discusses some more of the science behind compound radius and why it works:

Because the compound radius is a gradual change across the fretboard, it can be hard to feel the difference. It’s pretty subtle.

However, the benefits that I’ve discussed can be noticed, particularly if you have other guitars to compare it against.

I personally like them and what they can offer, but I’ve known others that don’t. Though, in my opinion, there aren’t really any cons or downsides to having a compound radius fingerboard on your guitar aside from the possibility of having it a little more challenging to replace your frets if you ever needed to.

Regarding costs, getting a compound radius fingerboard isn’t significantly more expensive, say, if you were thinking about getting a custom guitar or replacement neck made at a place like Warmoth.

On guitars that have already been manufactured, I personally haven’t noticed a difference in prices, especially since compound radius has been standard on many guitars from brands like Jackson and Charvel.

Whether you’re looking at buying a new guitar at a store or you’re interested in building a custom guitar, a compound radius fretboard might be something you’ve come across in your search. If you’ve been unsure of how a compound radius works, I hope that this guide has been informative and has shown you some of the primary benefits of having one on your guitar.

If you get the chance, try to find a guitar with a compound radius that you can play in person. As I said earlier, the differences between one and a straight radius can be pretty subtle, and you might not notice them right away, especially if it’s your first time.

Still, I believe they’re only beneficial and can only help make your playing feel more comfortable, even if it’s ever-so-slightly.

Compound radius fretboards are a great and interesting feature to have, but the kind of wood you choose can make a bigger difference. Be sure to check out my guide to the main types of fretboard woods you’ll encounter and learn how they can suit you.