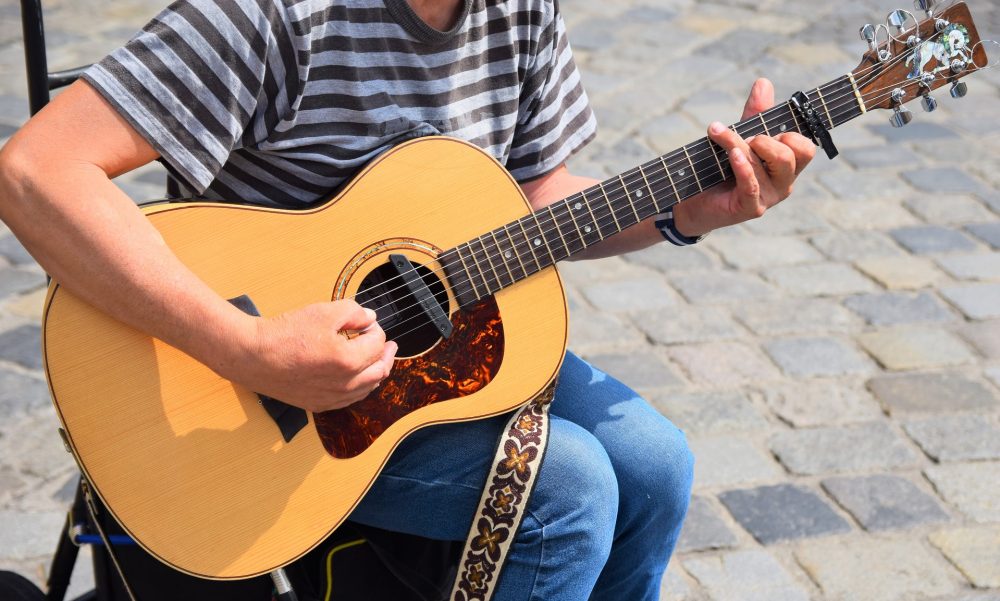 If you’ve been studying the guitar for a while now, the term “ghost note” may have come up at some point, hence why you’re reading this to learn more about them. Well, you’ve come to the right place because, here, you will come out having a better understanding of ghost notes and their applications.

What Is A Ghost Note?

A ghost note can be defined as a note that can be played and heard but doesn’t have an identifiable or detectable pitch. It’s percussive in nature and produced by muting with your fretting hand. It is also sometimes known as a dead note, and it can be described as a “clicking” sound.

However, ghost notes aren’t exclusive to the guitar; they’re also popularly used by bassists and drummers! Believe it or not, even pianists and singers can also learn how to use ghost notes.

Obviously, though, the ghost note is applied differently on those non-stringed instruments because they don’t fret notes and mute with their hands; nonetheless, the principles are the same – it’s meant for a percussive effect.

That said, chances are, you’ve probably played ghost notes on your guitar because it sounds cool but didn’t realize they had a specific name. You may have also heard your favorite guitarists use ghost notes in their playing, and you’ve tried to emulate it for yourself.

While ghost notes are commonly used for strumming chords, fingerstyle guitar, and other aspects of rhythm guitar playing, they can also be utilized for muffled and articulate lead guitar parts! As you continue to read on, you’ll find out some reasons why they can be pretty valuable to your guitar playing!

Why Are Ghost Notes Important?

The most significant use of ghost notes is to add rhythmic interest to a guitar part. They can do this by helping to fill in the gaps between the main beats or accentuate them.

This use of ghost notes is beneficial for rhythm guitar parts because it can make them sound fuller, and it can also help to accentuate certain features of the rhythm. It is also why you’ll often see them associated with strumming patterns, and on sheet music and guitar tabs, they’ll be indicated with an “x” on the strings.

Ghost notes can also add texture to a lead guitar section. For example, you might use them to add some staccato (short and detached) notes in between the more sustained parts. This use of ghost notes can help break up the monotony and make the lead part sound more interesting.

Keep in mind, though, that there is a difference between palm muting and ghost notes. Both are percussive, but the reason it’s called a ghost note is that it has a rhythmic value, but it doesn’t have a proper pitch. In contrast, palm muting usually has a very defined pitch to it.

Ghost notes shouldn’t be confused with grace notes. Grace notes are brief notes added to embellish a melody or lead part. They’re an ornament usually played before the main note, and don’t have a rhythmic value, so you don’t count them out. Essentially, they’re a “feel” thing, and although it’s very swift, you can still hear the pitch of the grace note.

By understanding the different techniques out there you can experiment with, you can have more creative choices and make your guitar parts stand out and sing. Check out this awesome video to see what some of the incredible possibilities you can do with ghost notes:

Now that you know what ghost notes are, their function, and how to use them, get out there and start incorporating them into your playing! They can be a great way to add some extra flavor to your parts, and they’re also a fun technique to experiment with. So have at it and see what kinds of new ideas you can come up with by using ghost notes in your guitar playing!

Although techniques like the ghost note and other ones mentioned in this article are important for musicality and creative expression, it’s also worth taking the time to learn about how to choose the right notes to express yourself too. That’s where some music theory comes in handy!

Be sure to check out some of the best music theory books for guitarists I’ve hand-picked out – they make it easy for people who are new to theory to get started and start applying it to their guitar. Having knowledge of scales and how chords work will make a massive difference for you as a player in both the short and long term!