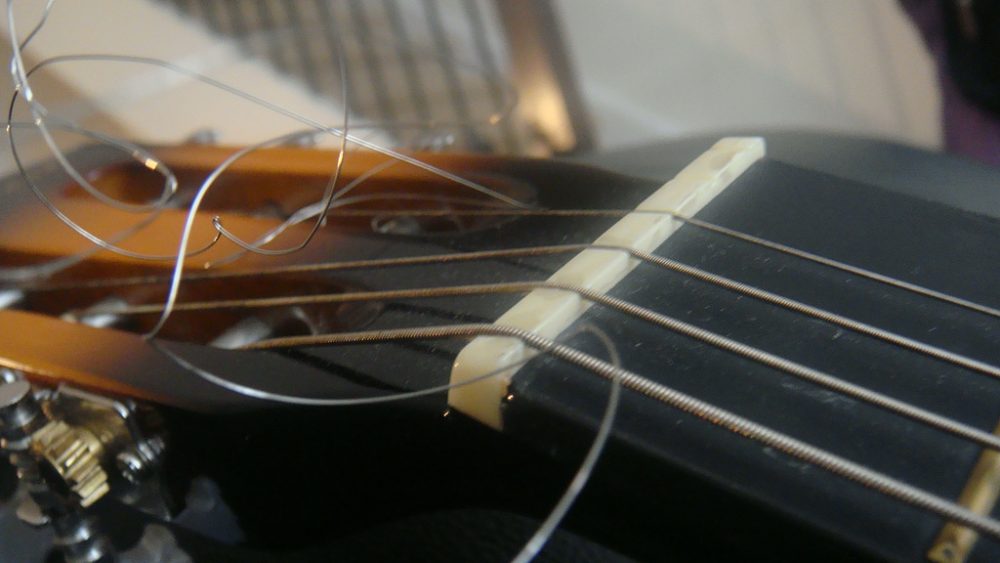 After enough use, guitar strings will eventually become dull, lose their tone, and possibly even break! Knowing when to change your strings is second nature to experienced players, but for beginners, it might not be so obvious (unless one snaps, of course). This guide will give you an idea of when it’s probably time to open up a pack and put fresh ones on your instrument so that you can get a clearer and brighter sound and a better playing experience overall.

It doesn’t matter if you have an electric, acoustic, or classical guitar, as soon as you start playing guitar with new strings on it, sweat and oils from your hands and fingertips begin to accumulate not only on them but your fretboard too.

The moderately acidic nature of sweat is enough to cause the guitar strings to corrode, which causes them to become weak and brittle physically and sound-wise.

Although some strings are more resistant to corrosion and rust, and there are a few ways to prolong their life, it’s pretty much inevitable, and it comes with the territory of playing the guitar.

If these worn-down strings are on your instrument for too long, there is a pretty good chance that they will snap while you are playing. It’s not always guaranteed to happen – you might get lucky, but I’d consider your strings to be on borrowed time.

Breaking strings can happen very suddenly as well, and they don’t always need to be old either. I’ve accidentally snapped some while playing, but admittedly it was entirely my fault.

For instance, regardless of how old the guitar strings are, bending them excessively hard can cause them to break prematurely. Getting in the moment and bending just a little too far can do that to you. However, this will more than likely happen only on the B and high-E ones – so be careful with those two in particular because they are the thinnest ones and are prone to breaking spontaneously if you’re not paying attention to what you’re doing.

How Often Should You Change Your Strings?

Other than the apparent signs we went over in the last section, changing your strings can be a matter of preference, and it can depend on necessity.

Some people treat them like oil changes in a car – either recommending a few months or after a certain amount of hours of playtime. Some even like to change them every week!

In my opinion, though, it’s totally situational, and can be based on your personal circumstances.

If you are a beginner, especially one who practices reasonably often, you can expect to get at least a couple of weeks out of a set of strings, but it’s usually longer than that. Players who have experience, especially those with more than one guitar, can get away with changing them less frequently since they’ll be dividing their time between the other instruments that they have.

On average, I’d say you should leave a set of strings on no longer than a month if you want to retain a good feel and sound to them, but this depends entirely on your amount of playtime.

That being said, the longest I’ve had strings on a guitar for was around a few months, and while they showed their age and lacked clarity, they were never completely dead and still playable. It was still on there for a little too long, nonetheless. If it was my only guitar though, I’d have changed them way before that.

On the other hand, if you’re a touring musician or you’re going to be in the studio to track your guitars for a song, you’ll definitely want to have some fresh new guitar strings so you’ll be sounding your best and most consistent during those situations.

If anything, the individuals who are playing in professional capacities are the ones who should be swapping them out often, such as when a song is finished being tracked or after a couple of gigs, since there is more at stake.

For the casual or new player though, this isn’t necessary and to be frank, kind of wasteful. It’s hard to beat the crisp sound and feel of clean and shiny new strings, but they definitely can last longer than people realize.

Ultimately, it’s up to you when to change them, but your most reliable signs that your strings are wearing out are if they’re feeling sharp and brittle and if they’re losing the tonal quality that they once had. You don’t necessarily need to change them right away, but it’s an indicator that you will need to in the future.

What Are The Best Guitar Strings?

Like guitars themselves, the strings are also a matter of preference. There are several different brands and gauges to choose from and will get the job done; it’s nearly impossible to pick an absolute best. However, I can give you some solid recommendations.

For beginners, I suggest starting with a set of light 9-gauge strings (9 to 42) because they’re easier on the fingers. However, these are very thin and are prone to breaking! Therefore, it’s a good idea to “graduate” to a pack of 10-gauge strings (10-46) as soon as possible since these are a nice balance of durability and playability.  Having a 10 as the lightest one is considered to be “regular”  by most string manufacturers.

I’ve used 10-gauge strings for about a decade straight, and I mainly played around with brands such as D’addario, Ernie Ball, and GHS. They are by far the most popular brands of strings and you can usually get good deals on them at bulk pricing, so you can always have a pack of strings handy when you need them.

Eventually, I moved on to 11-gauge strings since my fingers can handle them and I enjoy the fuller tone from them. In my opinion, the higher the gauge so the greater the sound you get! Nowadays, I’ve pretty much just been using these Ernie Ball Power Slinkys, and they’ve been treating me well. However, it can be tough to bend these thicker strings in standard tuning because of the tension, so they’re best with drop tunings.

Elixir guitar strings might also be a good option as well, while they’re generally more expensive than other brands, they have a special coating that preserves them, so they could be worth the price if you get more out of them. I think they feel and sound great, but I have a buddy who absolutely swears by them and is a lifelong fan of Elixer.

How To Make Your Guitar Strings Last Longer

If you’d rather get the most life out of a set of strings, rather than change them often, there are some ways you can do this.

The first and easiest thing you should always do is to wash your hands before each playing session to remove the acidic sweat and oil from them that cause corrosion in the first place. It won’t stop it from happening completely, but getting into the habit of playing with clean hands will help minimize it.

Next, after you’re done playing, you can wipe down your strings with a soft, dry, cotton cloth that will help keep them clean in case any grime accumulated while you were playing.

Lastly, there are products that you can use that are more thorough than anything else. A good string lubricant will do wonders for electric and steel-string acoustics, and using String Fuel from Music Nomad is an easy way to maintain them. It also comes with a microfiber cloth in case you happened to apply too much product.

Sometimes people underestimate the amount of time you can get out of a single set of guitar strings, and quickly jump to new ones as soon as any sign of wear and tear shows up. If you’re recording this is more understandable, but for casual play, changing too frequently can become excessive. However, by taking some precautions like the ones I’ve just talked about, you can slow down the degradation of your strings and get additional mileage out of the ones that you currently have on.

Changing your guitar strings can be a hassle at times, especially if you have a locking tremolo, but it’s something that every single guitarist has to deal with throughout their careers (unlike they have a personal guitar-tech, of course).

A string winder and cutter can also make it a little easier to remove and add new ones, and while they’re a small quality of life improvement, anything helps!

After taking the time to change your guitar strings, you are breathing new life into your instrument and allowing it to sound the best that it can be. While it’s a great feeling to have a new set of strings on your guitar, never forget that there are steps you can take to extend their lifespan.

If you’ve enjoyed this article, you might also like my guide to cleaning and maintenance. Like guitar strings, grime and oxidation can build up on your fretboard, pickups, and other hardware and should be removed. Additionally, fingerprints will also build up on your paint job. Learn how to keep your guitar looking good and feeling good here!