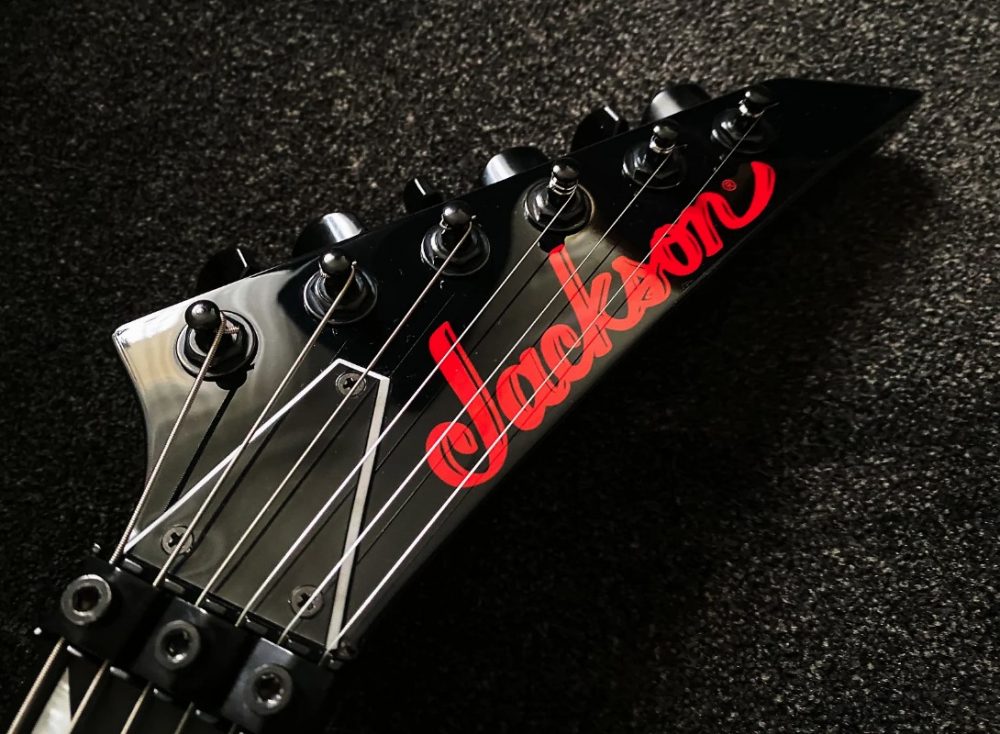 Jackson guitars have been around for decades, and their unmistakable shapes and sound have become a staple in hard rock and heavy metal music, but how exactly are these guitars constructed, and where are they made?

In this article, we’ll take a closer look at the craftsmanship of Jackson guitars and explore where Jackson has guitar factories worldwide.

An Introduction to Jackson Guitars

Jackson guitars are one of the earliest pioneers of the “metal” electric guitar, and they have been making them since the late ‘70s when Grover Jackson was based in Wayne Charvel’s guitar repair shop in Glendora, California.

However, the first official “Jackson” branded guitar appeared in 1980, when Randy Rhoads (of Ozzy Osbourne fame, in case you don’t know) came to Jackson for a custom instrument, which became the iconic Concorde V.

This is the cream-colored Rhoads model with gold hardware and pinstripes on the body that most guitarists know and love.

Since then, they have become one of the most recognizable names in the electric guitar market, and they are known for their high-quality construction, fast playability, and powerful sound, making them a favorite among shredders.

Their guitars feature a unique style, often with sleek and angular bodies, headstocks, and inlays that make them stand out from other brands. Jackson’s guitars have been used by some of the most famous musicians in rock and metal, including Dave Mustaine, Marty Friedman, Jeff Loomis, Phil Collen, Adrian Smith, Scott Ian, Brandon Ellis, and the list goes on and on.

Where Are Jackson Guitars Made?

Jackson guitars have historically been made in a handful of locations globally, like Mexico, Japan, Korea, and Indonesia, but are based in the United States, namely in California.

During the 80s and 90s, Jacksons were built in Glendora, Ontario, and San Dimas, CA; however, since the early 2000s, when Fender purchased them, Jackson has produced their high-end guitars at their shop in Corona, California.

The same goes for Charvel guitars, with whom Jackson shares a rich history.

Although Corona, CA, is where most of the company’s high-end guitars are made, you can find many of these fantastic instruments made in Japan and Korea.

Japan, in particular, was known for creating some excellent guitars during the 90s, not only for Jackson but for other brands like Charvel and Fender and, of course, their native brands like ESP and Ibanez.

To this day, Japanese guitars are still revered as some of the best around!

That being said, Jackson’s Mexican factory is located in Ensenada, and like Fender, many of their mid-range priced guitars are created here; however, you’ll find some of them, as well as most of Jackson’s entry-level instruments, are built in Indonesia as well as in China.

What Are The Best Jackson Guitar Models?

Jackson guitars come in various models, ranging from low-end to high-end. As mentioned before, their lower-end models are typically built in Asia, but despite their low cost, they are known for being reliable.

The company’s higher-end models are primarily made in the USA, and they are known for their superior craftsmanship and sound, which is why they are sought out by Jackson enthusiasts or guitar shredders in general.

The company’s most iconic models are the Soloist and Rhoads V designs. The Soloist is a higher-end superstrat that looks nearly identical to the Dinkies but features better craftsmanship, components, and different features, like a neck-thru-body design.

On the other hand, due to it being one of the most popular V-shaped guitars, the Rhoads model has a wide price range to accommodate many different people’s budgets, and it is easily one of the most iconic guitar shapes of all time.

Jackson also produces a variety of other models, including the King V, Kelly, and Warrior. The King V features symmetrical fins, and the Kelly and Warrior are razor-sharp takes on the classic Explorer and Star designs, respectively.

The craftsmanship of Jackson guitars is one of the main reasons why they are so popular and why people frequently go to them for custom shop instruments that are made in the USA. Even their budget entry-level models that are outsourced to other countries are made with care while being priced to get a guitar in your hands.

Because anyone can get a good Jackson at a price that they’re comfortable with, Jackson guitars have consistently been one of the most popular guitar brands for 40 years, and many of their designs are easily recognizable, even among non-guitarists.

The company’s unique style and sound have made them a favorite among guitarists worldwide, so if you’re looking for a guitar that stands out from the rest, a Jackson guitar is the way to go.