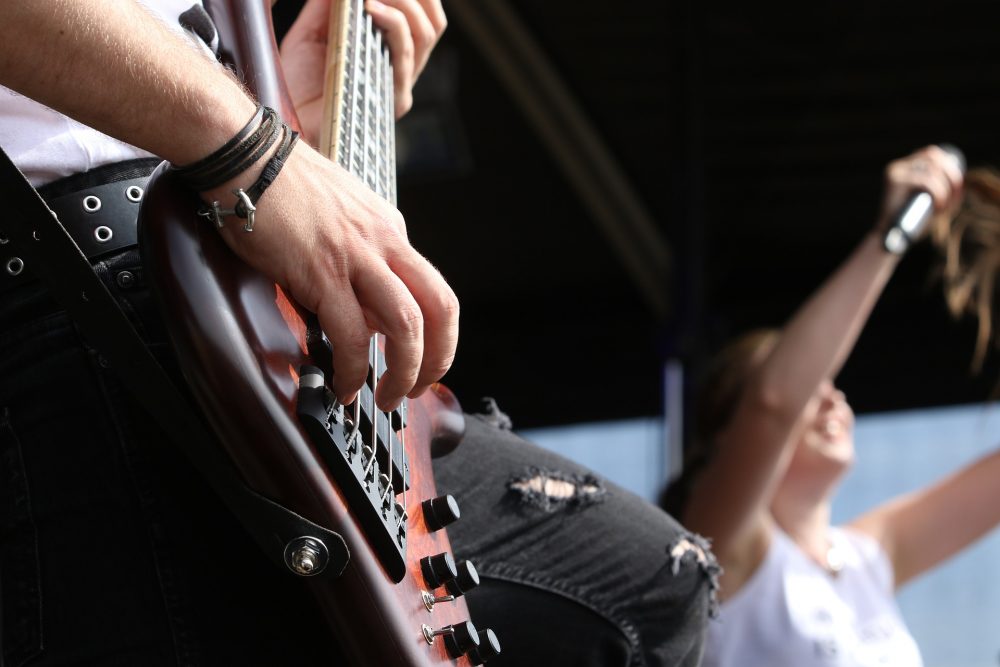 While bass players won’t find themselves strumming or hitting chords too often on their instruments, learning about chords and how they’re made is an essential part of music theory that can significantly benefit your ability as a bass player. This article will discuss why understanding chords is vital to bassists and how you can approach them like a professional player.

Why Should Bass Players Learn Chords?

Believe it or not, having a firm understanding of chords is a crucial part of being a fantastic bass player.

Sure, bass players aren’t typically known for hitting all of the notes of a chord at once, as a guitarist would; instead, they take a more supportive role that requires knowledge of how chords are made and their relationship with each other. Knowing these will help you make the best note choices for your music.

Essentially, bass players will benefit the most from learning about chord tones, chord shapes, and chord progressions.

Knowing about these individual aspects of chords and harmony is valuable because it can help you create better bass lines that emphasize what your bandmates are playing and enhance the music overall.

For the bass player, harmony is just as important as the rhythm and tempo, and as you continue to read, I’ll go into more detail about these essential concepts that all bassists learn and become familiar with.

Each type of chord contains a specific set of notes which are defined by a set formula based on intervals.

For example, all major chords are built from a root note, a major third, and a fifth, whereas all minor chords will use a minor third instead of the major. These are known as triads, and learning them will take your playing to the next level.

Now, for bassists, you usually won’t be hitting all of these notes at once, but you can pick any of those three notes to play, and it will sound good and accentuate the chords that are being played by other instruments, like the guitar.

A great way to do this is by using arpeggios, which are chords that are broken apart into their individual notes. No matter if you played a sequence of C-E-G, or G-C-E, or E-G-C, you’d still be playing a C major arpeggio.

You can create amazing bass lines this way that works every time, but to be able to do so at will requires a bit of knowledge of scales, intervals, and of course, the fundamentals of harmony.

Music theory can be scary for many people who are unfamiliar with it, but it’s not as intimidating as it sounds. In fact, once you get the hang of one concept, it usually all starts to click and fall in place since these topics build off of each other and are interrelated.

Check out my article on the best music theory books for bassists to find some fantastic resources to help guide you to become a better bass player and musician overall.

While it’s useful to know the notes of each chord that you come across, learning different shapes can make it a lot easier to find the chord tones you need.

The fretboard is full of moveable shapes across the entire neck, so if you learn, say, your major scale shapes, you can use them anywhere.

If you study how the chord shapes are voiced, for instance, a basic shape might have the root note in the bottom, the third in the middle, and the fifth as the highest, you won’t really have to think as hard about where to find specific notes that you want to hit.

Similarly, there are a bunch of different arpeggio patterns that you can apply across the fretboard that will make it easier to play those on the fly.

However, it is still recommended that you spend a little time each day memorizing your fretboard so you can find the notes on your own without using shapes and patterns as a crutch.

Nonetheless, they are still super convenient, and it’s totally worth learning them. Be sure to watch this video on some of the different bass chord shapes you can add to your skillset:

Whether it’s simple or complex, most music is built from a chord progression, and having knowledge of how chords are made can help you make sense of how these progressions work.

Say you’re having a jam session with a group of people who tell you they are playing the I-IV-V chord progression in the key of G major. What do you do?

If you know about the major scale and the chord qualities assigned to each note, you’d be able to identify the chord progression as G major, C major, and D major.

However, a lot of the time, the chord progressions will also be listed out by name like this as well.

Having the chords laid out in front of you in one way gives you direction on where you can go with your bass lines or solos, and that’s where identifying the chord tones is crucial.

So, if you’re improvising over these chords in a progression, you automatically know that any of these notes that are assigned to all of their respective chords will absolutely work.

It’s just up to you to figure out what to do with these note choices, and this is what allows your creativity to shine!

Learning the basics of music theory will help you accomplish this – it doesn’t reduce your ability to be creative; instead, it enables you to understand why something works so you can keep making excellent musical decisions.

I’d argue that not only learning about rudimentary harmony will significantly improve your playing, but it’s crucial for just about any serious musician.

Think about it – there are countless monophonic instruments out there that physically can’t produce chords, including the human voice, but it’s still useful for the performer to know what notes to perform so that it’s harmonious with the other components that are being played in the music.

Therefore, even if you’re not the one playing chords, it’s helpful to know how they work.

After all, as a bassist, the majority of the time, you will be helping to lay the foundation of the song. So aside from locking in with the drums, you’ll also be able to outline the harmony with your note choices.

You don’t need to be stuck playing the root notes all of the time, either. Having some basic theory under your belt will help you be able to break out of this box and have even the simplest basslines stand out.