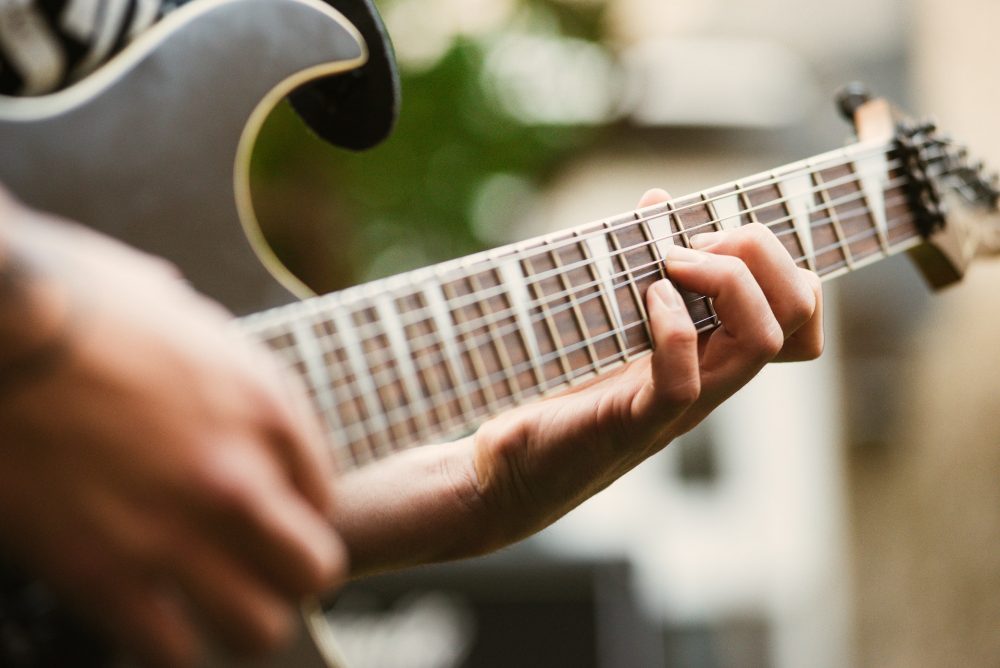 For many guitarists, bending strings is an essential part of their playing. But why do they do it? What’s the purpose of bending guitar strings?

There are a few different reasons why guitarists bend their strings, and it’s mainly used by those who play the electric guitar, but it can sometimes be used to great effect on a steel-string acoustic.  Guitarists will bend strings so they can increase the pitch of the note, apply vibrato, and add sustain and release.

Let’s take a look at some of these most common purposes for bending more in depth below:

1. To Increase The Pitch Of A Note

Learning to bend to accurate pitch is a skill that people must develop if they are going to use bending techniques in their lead guitar playing. If you bend arbitrarily, you will sound like you’re playing out of key. So, to practice this and work on your ear, find the note you want to bend as well as the note that you want to reach by bending, which is usually a half or whole step away.

Bend the string and try to hit your targeted note – if it matches, you’re on the right track to accurately bend in pitch consistently. Once you get this down, you can start exploring microtones by utilizing quarter-bends and such, making your guitar truly sing by giving it more vocal quality to your lead guitar playing.

Vibrato is a technique that adds expressiveness to a note by rapidly oscillating its pitch. When done on a guitar, this involves bending or wiggling the string back and forth while holding down a note. This creates a warbling effect that can add life to a solo or melody line. Vibrato can also be applied to chords too, but this is easier to do with a whammy bar than by bending.

Like bending, vibrato is also a skill that must be worked on through careful practice. You want to be able to have great control over it! Many times, people, including some experienced players, will add a vibrato that is too fast and too out of control, so rather than sounding expressive, it ends up sounding annoying and unpleasant, like a mosquito buzzing near your ear.

A nice, wide vibrato that matches the tempo of your song will always hit the spot. You can also hit the note and delay the vibrato by a bit, making it feel like it’s grabbing your audience in. These are just a couple of examples of ways to be mindful of using the vibrato technique once you understand how you can command it, rather than simply applying it without much thought.

Sustain is the length of time that a note continues to ring out after you’ve plucked or picked it. Bending a string can increase sustain because when you bend a string, you’re essentially changing its tension. This higher tension makes the string vibrate for a more extended period before it eventually dies out.

If you want to get technical about it, when you pluck or pick a string, it sets off a vibration that is not just back and forth but also up and down. If you look at a guitar string under a microscope, you would see that it’s actually moving in a wave-like pattern. When you bend a string, you’re essentially changing the shape of this wave, which lengthens the amount of time the wave spends vibrating.

All in all, you can let a note you bend play out longer than if you were to just play the note by fretting it. This is definitely true if you perform a gradual bend and add vibrato! Additionally, by having control of how long the note sustains, you can release the note at will. Just like a slow, gradual bend upwards, you can bring it back down by either releasing it slowly or abruptly, which can both sound incredibly expressive when used tastefully.

Guitar bending is an fantastic technique that every guitarist should know how to do, as it can be used for various purposes, such as increasing the pitch of the note you’re playing, adding vibrato, and sustaining and releasing a note. All of these are things that can make your playing sound way more expressive. With a bit of practice, anybody can learn how to do it and use it to enhance their playing!