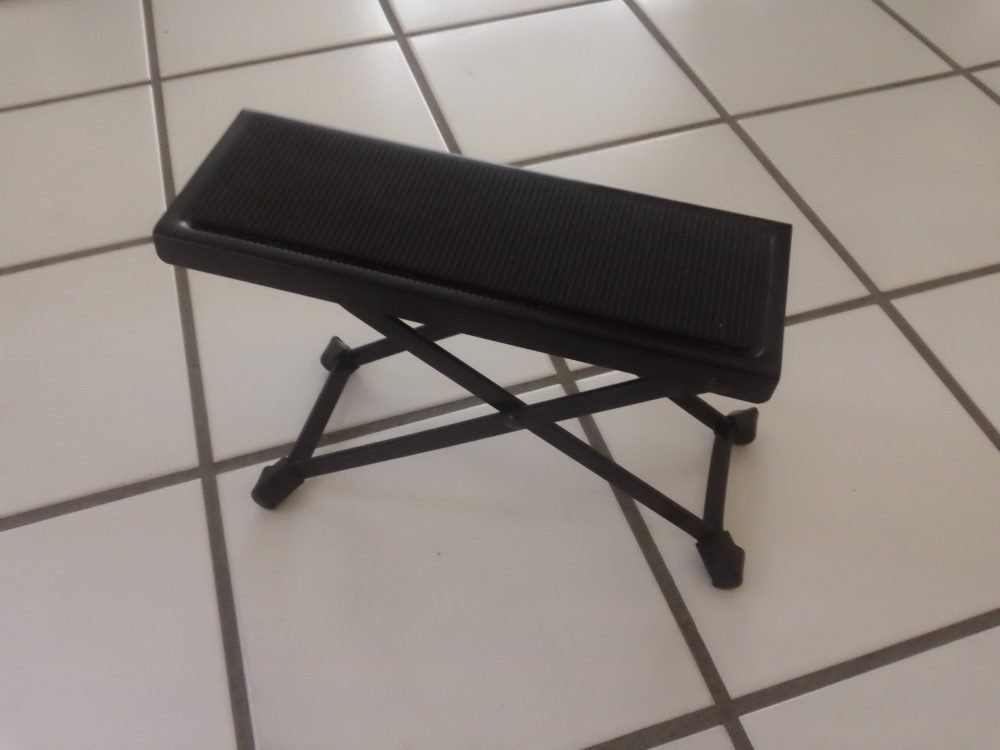 If you’ve seen a classical guitarist perform, there’s a good chance you’ve seen him or her use a footstool or footrest, to prop up the leg and support it. This is an essential part of their toolkit, and it serves a few different functions. Without one, technique and sound will be compromised, and this article will explain why that is the case.

It Aids In Correcting Your Posture

Simply put, having a footrest allows the guitarist to get into an optimal playing position

Sure, you can get pretty close by setting the body of the guitar in between your legs (as you might normally do anyway), but adding the stool into the equation will alter the angle of the neck and also puts your wrists in a better position to play in.

It should also encourage you to sit up straighter but not too upright since your spine has a natural curve to it.

The other method isn’t bad per se, and others may relax the guitar on their right leg – in fact, it’s common to see folk guitarists use either of these methods because they’re just fine for strumming or just for casual playing overall. However, these just aren’t the best stances for classical guitarists to be in because it doesn’t really facilitate precision.

However, in order to replicate the height and angle, you’d most likely have to cross your left leg over your right one, or you’d have to have one foot on its toes, and this definitely isn’t ideal. It’s less comfortable and stable, that’s for sure.

Overall, the goal of having good playing posture is to give you the most range of motion with minimal body tension.

When the guitarist is able to improve their technique – whether it’s through practice or by making adjustments, naturally, their tone should follow suit and become more pleasing.

As mentioned in the previous section, not only does the angle of the neck change with a classical guitar footstool, but the forearm and wrist also will slightly.

Although it may seem inconsequential, it actually isn’t, and a good classical guitar footstool is a cheap way to make a huge difference.

The plucking hand has a crucial role in tone and volume production, and if you’re not in the best position, you won’t be able to create the best sound that you possibly can.

The angle of the wrist changes how the fingers strike against the string, which will impact the clarity of your notes positively or negatively, depending on if you’re in the right stance or not.

They Can Reduce Injury & Increase How Long You Practice

Since a footstool is designed to help improve your posture and keep you more upright, you are less likely to hunch over or contort yourself, which can lead to back, shoulder, and neck pain.

With proper wrist positioning, you will be able to maintain the natural arch of your wrist. This will reduce tension and fatigue, and can help prevent injuries such as carpal tunnel and RSI (repetitive strain injury).

Since you’re putting yourself in a more advantageous spot for your body, it’s less likely that you will become tired and sore from practicing.

Instead of worrying about pain, fatigue, and injury, you can focus on more important things like your technique and the music you are working on. On top of that, you can play for a more extended period of time.

Doing what you can to keep injuries from occurring will keep you playing for years to come. All of those hours of practice sessions will add up to create great results.

You can see in this video how the footstool affects the guitarist’s posture and puts him in a more relaxed position:

Is There An Alternative to Classical Guitar Footstools?

Despite footstools being considered the standard and having been used since the 19th century by legends such as Francisco Tarrega and Andres Segovia (they used wooden ones), there are many players who still report having back pain while playing the classical guitar.

I’ve personally never had these issues, and I recommend that you re-examine your posture and technique first, and possibly adjust the height of your device as well. Even your chair might be bad, and it should be replaced, and you may also be sitting in it wrong (you’ll want to be towards the front of it)!

However, if you’ve tried everything you can to resolve it and nothing else helps, there is another solution out there that has helped people find relief.

The Ergoplay Guitar Support sits on top of your leg, and your guitar is fastened in by suction cups, and when used, it will put you in a position that is more or less the same as if you were using a regular footrest. It is lightweight, so it shouldn’t feel too intrusive, and it is designed not to leave marks on your instrument. Keep in mind there are other brands out there as well as guitar cushions; however, I can only vouch for the Ergoplay since that’s the one I’ve tried out.

I enjoy using traditional footstools, but I understand if they’re not for everybody. If you’ve never tried a classical guitar footrest before, I suggest playing with one first before anything else since it’ll be the cheaper option by a long shot. If you don’t like it, just know that there is another option out there.

A good classical guitar footstool won’t cost you an arm and a leg, and an adjustable metal one should last you forever!

Using one allows you to get in a better position for playing the guitar, and as inexpensive as they are, they offer a few significant benefits that can enhance your playing and how long you do it.

So not only are footstools for classical guitar traditional, I think anything that gives you an instant advantage is worth it in my book!

As mentioned before though, there is an alternative in case you are one of those individuals who still happen to experience pain while playing.

Using the Ergoplay guitar support still allows you to achieve the same positioning and angle as you would with a footrest, and it may perhaps be the future of classical guitar – many top performers endorse it, and it’s worth a shot if the stool isn’t working out for you.

Nonetheless, regardless of which product you decide to choose in the long run, working on great posture and technique will set you up to perform and sound your best which is the most important thing when learning how to play classical guitar.

If you liked learning about the importance of classical guitar footstools, be sure to also read my guide on the other accessories for classical guitar that you’ll want to pick up. Most of them are quite affordable and will contribute greatly to your playing experience, so find out what else you need to get started if you’re a beginner!